The Mingan Island Cetacean Study (MICS) conducts research on populations of blue, humpback, fin, and minke whales in the Gulf of St. Lawrence. MICS is best known for being the first organization in the world to have carried out long term studies of the blue whale.

We use photo-identification techniques to recognize individual baleen whales enabling us to create a sighting history of known animals. Each year, newly photo-identified individuals are added to the photographic catalogue. We are the curator of the North Atlantic Blue Whale catalogues, one for the western and one for the eastern North Atlantic. Researchers, sailors, whale-watchers from all over the Atlantic send MICS their pictures, which contributes to a better understanding of the migration, seasonal movements and habitat use of this elusive and endangered species. The western North Atlantic encompasses the waters along the eastern seaboard and North to Davis Strait between Canada and Greenland. Since 1979 we have identified over 475 individual blue whales in this region. The eastern North Atlantic catalogue includes over 350 animals as of 2013, the pictures come from numerous places, including Iceland, East Greenland, Ireland, Spitsbergen, Jan Mayen, Azores, Canaries, Spain and Mauretania. We still know very little concerning summer-winter migrations and the movements between regions. Thus far only three long-range matches have been found: one from Iceland to Azores, one from Iceland to Mauritania and one from the Azores to Spitsbergen, while there have been no matches between the eastern and western North Atlantic. Furthermore, it is not known whether or not blue whales undergo the textbook north-south migration assumed for baleen whales or if they have designated breeding and calving grounds as do right, gray and humpback whales. 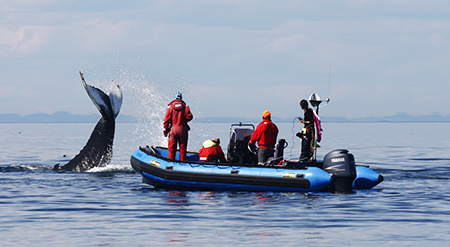 Photo-identification helps to define migration and movement patterns, but its main use is to follow individuals throughout their lives by creating sighting histories. We can learn how many calves a female has in her lifetime and when a former female calf reaches sexual maturity and has its own offspring (called age at sexual maturity). MICS studies the reproduction of blue whales in the Gulf of California, Mexico, which is one of the very few known blue whale nursing grounds. These animals summer off the west Coast of the United States and Canada. Since 1983 we have identified over 450 blue whales, including over 70 calves. We learned that females reach reproductive age at 10 years or more and can have a calf every 2.5 years. We do not have this information for blue or fin whales in the North Atlantic, since they mostly arrive in mid summer, when the calves have already been weaned after 6-7 months of nursing. Female humpback whales nurse their calves for up to 11 months, and therefore we can estimate reproductive parameters in the Gulf of St. Lawrence. Here, they have a calf every 3.5 years and females start reproducing at the age of 10-13 years.

Photo-identification allows us to estimate the size of populations, estimate survival rates (mortality) and population trends. It was MICS that estimated the first survival rates for blue and fin whales based on such sighting data. We were also the first to show that male and female humpback whales have a different survival/mortality and linked this to elevated costs of reproduction, something typical in polygynous species, but not shown for any baleen whales species.

To identify individual blue whales we take photographs of the pigmentation patterns on both flanks. Because of their length, two pictures of each flank are needed. The first picture covers the blowhole to mid body and the second from mid body to dorsal fin. Pigmentation patterns vary from light gray on a predominantly dark gray background pigment to the inverse...

Research leapt forward at the end of the 1980s, when we began taking biopsy skin samples. Skin biopsies taken in conjunction with photo-identification provide us the sex and genetic code of individuals, and enabled us to better understand social structure, reproduction, and eventually the genealogy of each species studied.    Skin samples can also be used to determine each individual's...

Current Projects   In addition to our regular photo-Id and biopsy-based population structure and behavioural studies of baleen whales in the Gulf of St Lawrence, we collaborate with several other research institutions and universities research projects involving acoustics, genetics, and foraging behaviour.

Collaborations Mingan Island Cetacean Study (MICS) collaborates with many research organizations, universities and other NGO's to complete a wide ranging of studies. In Quebec, MICS is part of the Quebec Stranding and Disentanglement Network (Quebec Marine Mammal Emergency Network) helping marine mammals in distress. This network includes various governmental and non-governmental organizations in Quebec.  Our longest standing collaboration is with...

Our Study Areas      Click on any of the locations on the right to find out more!