Presented as a poster at the Society for Marine Mammalogy conference in 2015, San Francisco

Despite the first St Lawrence (1984) to Azores (2014), match-comparison of Northwest Atlantic(NWA) and Northeast Atlantic(NEA) blue whale catalogs revealed no further matches, which suggests two largely discrete blue whale populations in the North Atlantic. One population ranges from West Greenland, South along North America-centered in eastern Canadian waters. The second from Denmark Strait, Iceland, Jan Mayen, Spitsbergen to the Barents Sea in summer-extending South to Northwest Africa in winter (Reeves et al. 1998;Sears and Calambokidis 2002; Reeves et al. 2004; Baines and Reichelt 2014). A photo-identification catalog of 495 individuals has been collected in the St Lawrence from 1979-2015, predominantly during the months of June to November. Blue whale photo-identification data in Icelandic waters yielded 125 individuals collected from 1996-2005, while 335 have been photo-identified in the Azoresthe most in the NEA. This recent sizeable increase in the Azores is due to more dedicated efforts in April and May from 2002-2015, and photoidentification images provided regularly by Pico Island and Faial Island based whale-watching operators, who focus on migrating rorquals in the spring. 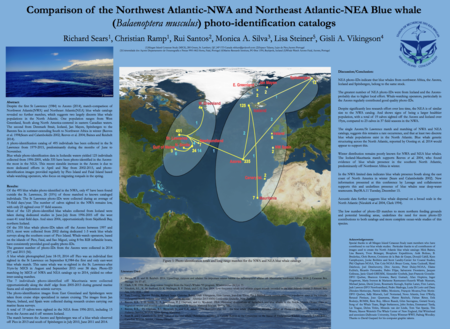