In collaboration with a local whale-watching company, MICS studies blue whales that pass by this mid-Atlantic archipelago in the spring. Based on Pico Island, this is also a great opportunity to see plenty of cetacean species. 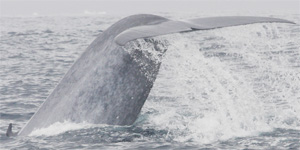 The Azores have a generally sunny, mild climate with occasional showers. Because they are in the middle of the Atlantic their waters include many resident and transient species. This session is geared to learn more about eastern North Atlantic blue whales, who pass by the Azores on their way North to Icelandic and Norwegian waters. Our fieldwork includes photo-identification, behavioral observations, and acoustic recordings with regard to the study of eastern North Atlantic blue whale ecology. Because the focus is on blue whales, when they are present we will concentrate our efforts on blues and not spend as much time with other species. The Azores offer a very rich open ocean environment created by mixing of various water masses against the islands.