Description: The North Atlantic right whale is a baleen whale with a massive and imposing body. Compared to its weight, the animal is relatively short, which gives it a stocky and plump appearance. They are light brown to blue-black in color, sometimes with white spots on the belly, and lack a dorsal fin. The right whale has yellow-orange callosities on its head, and the distribution of these callosities (above the eyes and all around the rostrum) help identify individuals. Another identifiable species characteristic is a distinctive “V” shaped spout, caused by widely spaced blowholes. The North Atlantic right whale is a threatened species and one of the most endangered large whale species.

Unlike rorquals, the North Atlantic right whale does not have ventral grooves, so rely on a “skimming” feeding technique. The baleen plates are much longer than those of rorqual whales and line the contour of the upper jaw, except for a space in front of the jaw, allowing water and food to enter their mouths continuously as they swim through the zooplankton beds. These small, microscopic organisms then get caught in the baleen plates like a filter or strainer. The right whale feeds on copepods (a type of zooplankton) and can consume up to 1100 kg per day (usually from spring to fall and in some places during winter as well if prey is available); with its thick layer of fat, the animal stores energy during periods when it is feeding in anticipation of periods when it will not be eating, such as during breeding, calving and nursing.

Behaviour: Solitary, or in small groups. Slow surface-skimming behavior. Terminal dives which can commonly last between 6 to 8 minutes but can be up to as long as 60 minutes. 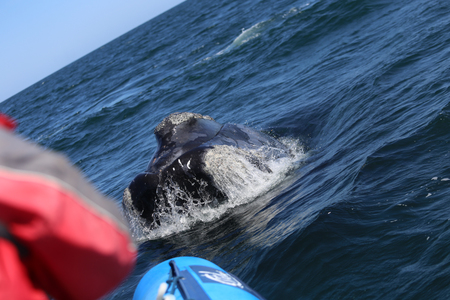 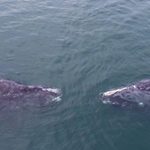 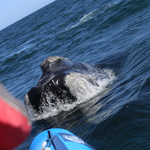 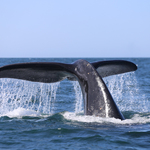 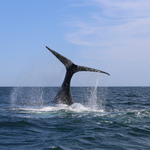