Life expectancy: estimated maximum age for males is 22 years and females is 27 years (2) 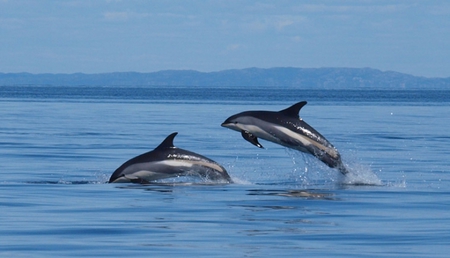 Atlantic white-sided dolphins jumping off the coast of anticosti

Description and Taxonomy: Atlantic white-sided dolphins are toothed whales, or odontocetes. They are most easily identified by the sharply defined, narrow white patch that runs along their flanks beginning below the dorsal fin. The white patch ends abruptly and is continued by a yellow-tan patch that runs towards the fluke, or tail. The dolphins' back, falcate dorsal fin, flippers, and top beak are black and their lower beak and ventral sides are white. Atlantic white-sided dolphins, like most odontocetes, have rows of sharp, conical teeth along their upper and lower jaws, which they use to catch their prey. The Atlantic white-sided dolphin is currently one of six species grouped together within the genus Lagenorhynchus; however, data based on molecular genetics suggests that the six members of this genus are not closely related and should be split up into multiple different genera (e.g., 4, 5). At the population level, there is currently no evidence to support that the Gulf of St. Lawrence harbors a resident, genetically distinct population of Atlantic white-sided dolphins, and molecular and morphological studies are ongoing to investigate population structure of this species across the North Atlantic (6-8).

Distribution: The Atlantic white-sided dolphin is found in temperate and sub-polar waters across the northern Atlantic Ocean, in the east ranging typically from the Brittany coast of France, north to Norway and Iceland, southern Greenland, and in the western North Atlantic down to just south of Cape Cod, Massachusetts (9). These dolphins typically inhabit oceanic waters along the continental shelf and slope and are considered to be relatively abundant across their range. Within the Gulf of St. Lawrence, the Atlantic white-sided dolphin is most commonly observed at the mouth during summer months and more frequently sighted within the Gulf in August and September, although since the late 1990's, sightings within the Gulf have generally decreased (*).

Life History: Females reach sexual maturity around 6-12 years of age, typically around 2.1 m in length, while males are sexually mature around 7-11 years and around 2.3 m in length. Gestation is estimated to last on average 11 months with calves most commonly sited from May to September, and females give birth to one calf every 1-2 years (2, 3, 10, 11).

Diet: Atlantic white-sided dolphins are known to feed predominantly on fish from a variety of species including silver hake, haddock, pelagic Atlantic herring, mackerel, silvery pout, whiting, and lantern fishes, and also on some invertebrates including common squid and octopus (2, 12-14). There is some evidence that the favored prey type changes geographically and seasonally (3).

Behavior: The Atlantic white-sided dolphin is a gregarious and highly social species that lives and travels in groups of 5 to 500 individuals. The mean group size typically varies depending on location. There has been some evidence suggesting that these dolphins travel in groups that are segregated based on sex and/or age (2, 15). Also, mass strandings of Atlantic white-sided dolphins, of up to 100 or more individuals, is not uncommon, particularly in the western North Atlantic, although the causes of these strandings are unknown (16). As odontocetes, Atlantic white-sideds and other dolphins have the ability to use echolocation to find their prey in deep, murky waters. The dolphin emits clicks produced in their sinus cavities and directs them out into the water column through their melon, or forehead, where the sound waves bounce off objects and allow the dolphin to acoustically visualize where its prey is and what kind of fish or invertebrate it is.

Conservation: According to the International Union for Conservation of Nature and Natural Resources (IUCN), the Atlantic white-sided dolphin is considered Least Concern (9). However, threats from bycatch are of particular concern, as members of this species are vulnerable to entanglement in commercial fishing gear and have been incidentally killed in trawl nets throughout the North Atlantic (3, 16).

(5) McGowen MR. 2011. Toward the resolution of an explosive radiation - a multilocus phylogeny of oceanic dolphins (Delphinidae). Mol Phylogenet Evol 60: 345-357.