Life expectancy: estimated maximum age for females is 34 years and is unknown for males (2) 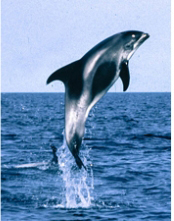 Description and Taxonomy: White-beaked dolphins are toothed whales and therefore are odontocetes. They have a very robust body, a prominent, falcate dorsal fin, and a short beak (rostrum) that typically has white pigmentation on it. Large dark regions on the dorsal sides of these dolphins are interrupted by blazes of white and light grey. Like most odontocetes, white-beaked dolphins have rows of sharp, conical teeth along their upper and lower jaws, which they use to catch their prey. The white-beaked dolphin is currently one of six species grouped together within the genus Lagenorhynchus; however, data based on molecular genetics suggests that the six members of this genus are not closely related and should be split up into multiple different genera (e.g., 3, 4). Furthermore, there is some evidence based on skull morphology that two different morphotypes may exist, one in the east and the other in the western North Atlantic (5).

At the population level, there is currently no evidence to support that the Gulf of St. Lawrence harbors a resident, genetically distinct population of white-beaked dolphins, and molecular and morphological studies are ongoing to investigate population structure of this species across the North Atlantic (6-8).

Distribution: The white-beaked dolphin is found in cold temperate and sub-polar waters throughout the North Atlantic and is generally considered to be more northern in distribution compared to the Atlantic white-sided dolphin (Lagenorhynchus acutus). Generally white-beaked dolphins are found along the continental shelf and most typically in waters less than 200m depth. In the eastern Atlantic, they range from France, north to the Barents Sea, across the North Atlantic to Iceland, southern Greenland, central Davis Strait, and in the western Atlantic south to Cape Cod, Massachusetts (9). In the Gulf of St. Lawrence, white-beaked dolphins are most often seen starting in July with sightings trailing off by mid-September. In the Gulf, white-beaks are typically seen less often than Atlantic white-sided dolphins, and in the past 10 years sightings in the interior of the Gulf have been rare (*).

Life History: Females reach sexual maturity around 8-16 years of age, typically around 2.4 m in length, while males are sexually mature around 11-13 years and around 2.7 m in length (1, 2, 10). Gestation is estimated to last on average 11 months and calving typically takes place during summer months. Generally, the white-beaked dolphin is not well-studied and much is still unknown about its life history.

Behavior: White-beaked dolphins are a social species that lives and travels in typically smaller groups of less than 10 animals, but have also been sighted in groups of over 100 animals (10). Along the north shore of the Gulf of St. Lawrence, groups of 10-35 animals have been observed most often (11). White-beaked dolphins often display aerial behaviors such as jumping and bow-riding, and they have also been observed alongside feeding humpback and fin whales, and sometimes with other species of dolphins (10). Since these dolphins are toothed whales, they can use echolocation to find prey in deep murky water. The dolphin emits clicks produced in their sinus cavities and directs them out into the water column through their melon, or forehead, where the sound waves bounce off objects and allow the dolphin to acoustically visualize where its prey is and what kind of fish or invertebrate it is. Unlike the Atlantic white-sided dolphin, white-beaked dolphins do not commonly strand in large numbers, but rather singly or in small groups (10).

Conservation: According to the International Union for Conservation of Nature and Natural Resources (IUCN), the white-beaked dolphin is considered Least Concern (9). However, this species has been incidentally killed from interactions with fishing gear. Furthermore, opportunistic hunts for white-beaked dolphins are known to occur in remote regions of Labrador and the southwest coast of Greenland, and in several instances, white-beaked dolphin mortalities have occurred from ice entrapment off the coast of Newfoundland (2, 12, 13).

(4) McGowen MR. 2011. Toward the resolution of an explosive radiation - a multilocus phylogeny of oceanic dolphins (Delphinidae). Mol Phylogenet Evol 60: 345-357.