The season begins at the station

The interns are finally out of their quarantine! After a week camping in the projection room in the museum or in tents under the observation tower, heating canned meals on a camp stove and living the thrills of an initiation to whale photoidentification while breathing through a mask, they were finally set free, with a negative test result up their nose and a second vaccine in their aching left arm. 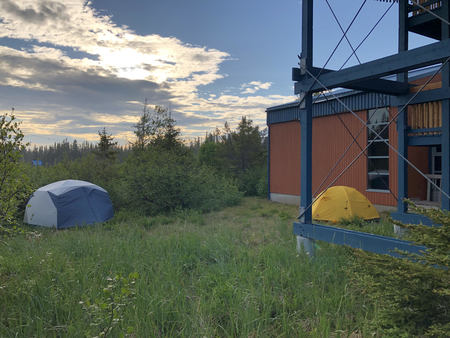 Once the tents were folded again, we set out on a deep cleaning mission in the famous beachside blue house, which had not been occupied for almost two years. Not only dislodging several spiders and their webs and lifting heavy furniture back into place, some interns had to become plumbers for a day to settle a few urgent problems. But once the toilets and shower were functional again, we were finally able to get into the routine of cooking nice meals in a real kitchen and appreciating the comforts of 20th century life again (the house has no wifi).

In the garage, everybody got busy to get the boats running again after several months in storage. Gaping spark plugs, testing batteries, installing a radio antenna, welding cables, waxing crossbow strings, backing a trailer, memorizing boating knots and understanding how to tell if signal flares are expired are not things we acquire in a biology class in university, but are indeed very important skills for who wants to set out at sea to study cetaceans! We roll up our sleeves and drink up the knowledge transmitted by the more experienced team members, while trying to avoid abusing of their patience when learning to deal with unfamiliar tools and motor grease. 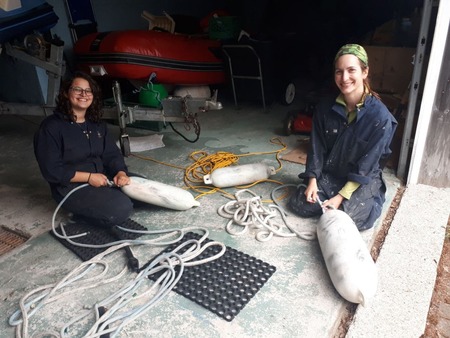 The interns also a have lot to learn concerning office work in order for the station to run smoothly. In addition to accounting, administrative tasks and the sale and purchase of marine gear, we have to identify humpback whales, photographed by Rene Roy along Gaspésie and compare a series of blue whales photo-Ided off California with our catalog of Ids taken in the Sea of Cortez, Mexico, become familiar with research protocols, update our website and prepare material to make our museum even more attractive for visitors.

We were finally able to get a boat in the water and set out to sea this week. It was a first time at sea for one of the interns, and we had to turn back to fish out a hat that had flown over-board : a rookie mistake! That day offered perfect conditions to learn coastal navigation and orientation from the beautiful Mingan Islands and out to Anticosti Island. And to review the rudiments of weather reading, nautical safety and navigation.

Just south of île Nue, we found a drifting dead female Minke whale, and documented the state of the carcass in photo and video. Without a complete necropsy, we were not able to determine the cause of death, however, it doesn’t seem as though this animal was an entanglement victim, because no rope and no deep injuries were observed. Later, we saw a humpback whale whose right fluke lobe was damaged. We first thought that we had found Dog Ear (H141), but a closer inspection of our photos once back onshore revealed that it was actually another individual we are still trying to identify. A good occasion to remember not to jump to conclusions too quickly in the heat of the moment! The nature of the injury leads us to think that it was caused by a boat propeller.

From the beach, we often see many grey seals and Minke whales, but this week brought us a big surprise, when a female Minke whale was seen travelling with her calf. Such observations are very rare in the St. Lawrence, but it was confirmed by an experienced collaborator and one of the interns, who unfortunately had no camera with her at that time. As a penalty for missing the occasion of documenting the pair, she had to inflate all four boats all by herself, with a hand pump.