Earlier this year, we reported that Rene Roy had found a large grouping of rorquals, including many blues passing by the eastern end of Gaspe in late June, which included female B275 Phoenix and male B191 known since the 80s.

On August 15 Rui Santos and RS crossed over to Gaspe aboard Indigo Riff to begin our dedicated blue whale study.  We departed Mingan at 06:00 and proceeded through thick fog until mid Jacques Cartier channel on mirror calm seas. The fog dissipated and the sea remained calm until we were south of the western end of Anticosti, where we were met by 15kt west winds kicking up waves of 1-2m in their usual short, steep rhythm, nastily common to the St Lawrence.  Indigo Riff made easy work of the waves, however and we made it to the Gaspe coast at the level of Cloridorme by 09:45.  We promptly spotted 2 fin whales and 3 blues in the direction of Grand Valle-the next town a few miles to the west.  IDs were taken and we then headed East to Riviere-aux-Renard, where we were to meet the rest of the team on the 17th.  We saw no large whales on our track east and headed into Riviere-aux-Renard marina by 18:00.

During the last two weeks of August we spent most of our time observing blue whales between Cloridorme and Matane along the Gaspe Peninsula. And between there and the North Shore near Sept-Iles 130 blue whales were photo-identified in 2019 and into the first days of January 2020- the highest yearly total yet.  The latter IDs were taken by Jacques Gelineau our collaborator based in the Sept-Iles/Port Cartier area, who ventured out late in the season and has been sending us photo-ID images as of the first week of January.

The most surprising, was that for the second year in a row we sighted many unknown blues (36), in fact the most since the early 90s.  We would expect such numbers at the beginning of a photo-ID based study, but not so much 40yrs on. This indicates that there are many blues that spend most of their time outside the St Lawrence, or at least not in the region from Gaspe to the Estuary and North to Sept-Iles and the Mingan area, where we have the most effort.

Because we found no blue whales or much else off the eastern end of the Gaspe Peninsula, we moved Indigo Riff and Squall (inflatable boat) west to Riviere Madelaine, where we had sighted many blues on August 18 and 19, and operated there from August 19 to 27. This sector yielded around 35 blues, not more than 1-6 miles from shore, feeding on dense patches of euphausiids, at times taking up 100m of the water column. Several biopsies were taken and a high proportion of the blue whales photo-IDed in 2019 were taken between Riviere Madelaine, Mont-Louis, and Mont St Pierre.

Notable sightings in this area included; B191 photographed by Rene Roy in late June at the eastern tip of Gaspe and B105, which was the first blue matched to the Azores (2014) from the St Lawrence and initially sighted off Mingan in 1984.  B105 appears to like this area of the Gaspe coast, because it was also photographed by MICS in 2015 off Cloridorme and L’Anse a Valleau over a 6-week period.  B093, a male known for more than 30yrs, was photographed during this period and re-sighted off Matane on August 26 and 28. In fact in addition to B093, B112, B194, B260, B439, B501, B512, and B534 all carried extensive fresh scarring along the apex of the back, the top of the head, or around tail area most likely caused by fishing gear encountered during the spring or summer. It is important to point out that this was B112’s 3rd bought of scarring caused by fishing gear.  The first was occurred decades ago before it was first identified, again in 2010 with extensive scarring on the tail probably caused by wraps of fishing line. The 2010 markings had faded over the last 10yrs, but the fresh 2019 marks, made the caudal peduncle and tail appear as though they had been grated.  B397 also had extensive scarring around the head and on the anterior portion of the back, which may have been caused by ice scarring, though it could also due to fishing gear. When blue whales first approach the St Lawrence during spring ice break-up, they can become trapped along the south coast of Newfoundland due wind or current driven ice.   Though, wounds caused by ice or fishing gear may not always kill blue whales, the trauma of multiple such events, as suffered by B112 can reduce overall fitness, hinder reproduction, and have lasting survival ramifications.

On August 25, our citizen contributor Rene Roy, informed us of 25-30 blues off Matane. And so having completed our work in the Riviere Madelaine/Mont St Pierre area, we traveled further west along the Gaspe coast to Matane - some of us by boat with Indigo Riff and others by road, quite a logistical caravan.  During our coastal survey, we found only a few scattered blue whales en route to Matane, once we had left the concentration from Riviere Madelaine to Mont St Pierre.

Starting on August 28th we enjoyed good weather for until September 3 and found nearly 30 blues in the Matane/Grosse Roche sector as Rene Roy had indicated.  These included old friends B082-Crinkle, B184, B128, B260, and B093, who was seen earlier off Grande Vallee,

Starting September 4 very poor November-like weather kept us in Matane, where we were joined by team member Bertrand Charry. Finally on September 12 we were able to leave for Sept-Iles.  The blues appeared to have moved out of the Matane area and so we travelled through patchy to dense fog across to the North Shore to Pointes des Mont. From there we had calm seas and unlimited visibility as we travelled northeast 7-10 miles offshore towards Sept-Iles.

About half way to Sept-Iles we spotted a veritable curtain of spouts hanging in the fresh morning air.  The forest of spouts turned out to be 55-60 humpback whales tightly grouped, over a dense patch of prey. We photo-Ided as many as possible, and after a thorough few hours working with the humpbacks, we spotted a blue just a bit beyond the group of humpbacks, which turned out to be B111. By then, because we were well into the afternoon and still had many miles to cover, we pressed on.  We photo-Ided two more blues off Port Cartier, then headed into the Sept-Iles marina and docked in the dark, having had a very good day.

In summary, most blues appeared to prefer the area between Grande Vallee and Mont St Pierre, and the area from les Mechins to Matane. At least 13 of these traveled to the northern Gulf and only a handful moved into the Estuary as far as Les Escoumins or Bergeronnes.  It is likely that many of the blues sighted along the South coast spent time meandering in the offshore area between the North and South Shore. We think this is the case due to the many blue whales we observed in September out into the middle portion of the St Lawrence. We could not get close enough to ID these blues due to the distance, time and numbers of sightings on the few days we were able to get out to sea.  On September 13 we deployed a satellite tag on a male in a trio of blues 6 miles off the Sept-Iles Islands and were able to follow along with this group to 40 miles south.  The next morning the data indicated that the tagged whale had reached mid Gulf and milled around as it headed slowly south. It arrived close along the South Shore on September 20 at the level of Mont St Pierre. This track reinforces the idea of blue whales traveling easily between the North and South shores. The trio was made up of one female and two males, thohg beyond the day we saw them together we do not know how long they stayed together.  One of the males-B443-had been sighted in mid August near Riviere Madelaine , then Sept-Iles a month later, and by October 3 in the southern Gulf off Miscou, where it was photographed in a pair with another whale during aerial surveys conducted by NOAA (Tim Cole and Pete Duley) The second whale was known to the catalog, but had been not seen earlier in the season.

The warmer weather late into December and early January enable Jacques Gelineau collect data later in the season than usual. There was little to no ice and apparently plenty of available food.  We have, however, sighted blue whales in all months of the year and blue whale sightings in January off Sept-Iles are not uncommon.

Many thanks to Rene Roy and Jacques Gelineau who shared numerous valuable Photo-ID images, that enabled us to get a much more complete view of dispersal and distribution of blues in 2019. 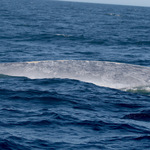 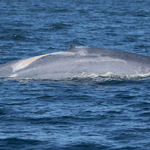 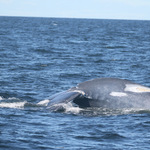 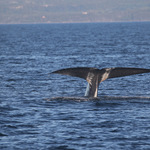