In 2018, MICS tested a new method using drones to study the entanglement rate of fin and blue whales. It was originally thought that fishing gear was of low threat to these animals, however, we soon realized that the issue was grossly underestimated: between 42% and 52% of the fin whales we had photographed had entanglement marks from fishing gear. Why was it previously underestimated? Our ability to assess this from a boat is limited mainly due to the fact that both of these species never (or hardly ever) lift up their flukes and peduncles out of the water when they dive. Seeing as those are the main parts of the body that are most likely to get entangled in fishing gear, we can easily miss any entanglement scars.

The rise of drone technology has therefore changed how we observe these animals, thanks to a new perspective! Beyond the study on entanglements, the aerial view of fin whales gives us a better view of their chevron (a light pigmentation pattern present on the right side of fin whales, starting just behind their head), which enhances the photo-identification process. For more information on the results of the 2018 entanglement study results, please read the article: “Fin whale entanglement project: 1st year results”. 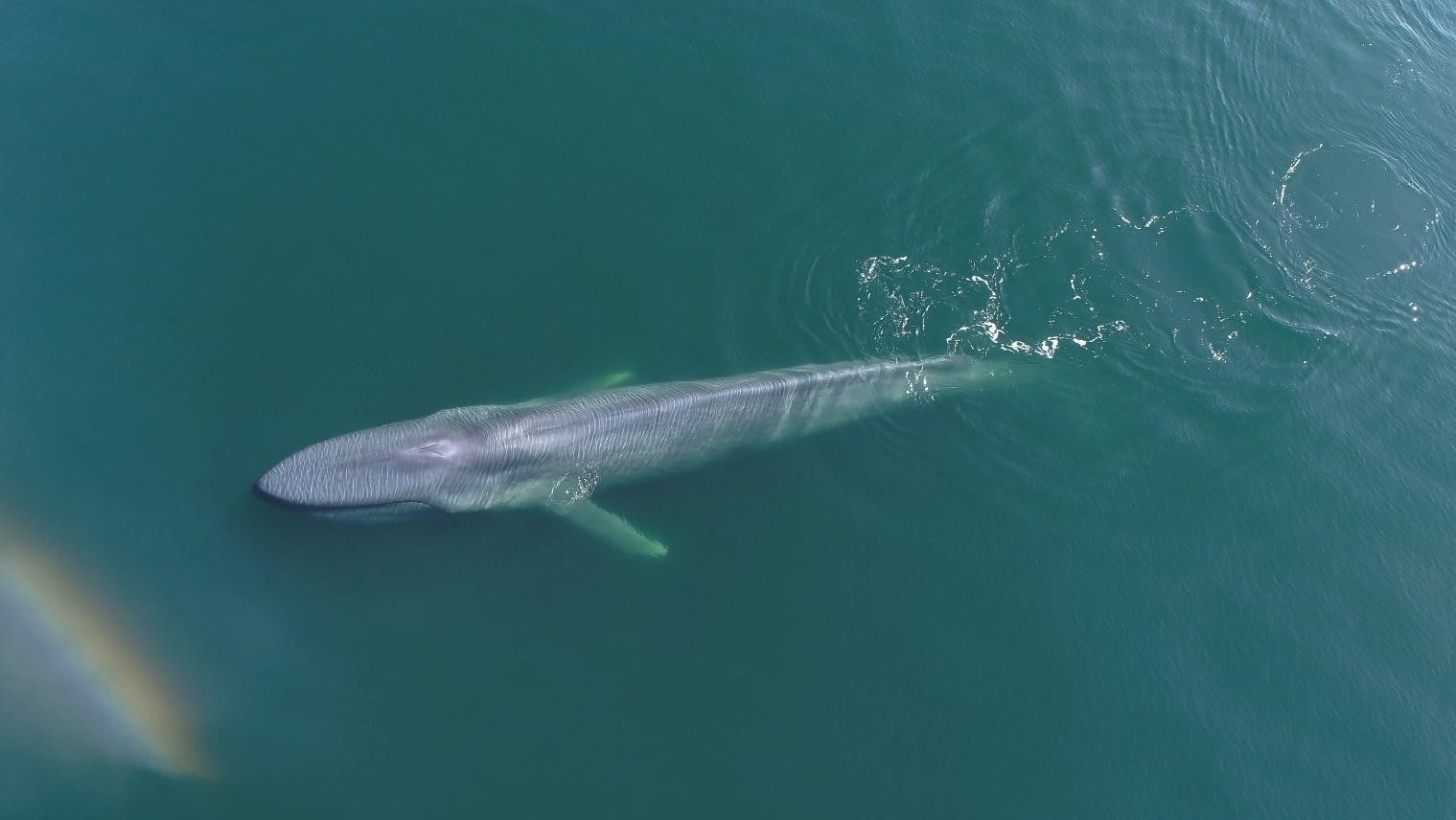 This year was not very kind in terms of weather. The entanglement study began on July 21st and ran until September 2. However out of these 43 days, we were only able to spend 15 days on the water with the drone team. This yielded 13 hours and 03 minutes of flight time.

The drone team used the "Inspire 2" from DJI, with a 5.2K camera. In 2018, we operated with the "Phantom 3" also from DJI. The use of new equipment and a higher resolution camera this year has allowed us to obtain higher resolution images of the scars present on the animals' bodies. However, that also significantly increased file size - at a rate of 300 MB per second, it resulted in nearly 6 TB of data. This data is then processed and categorized by day and by animal in order to be matched to Gulf of St. Lawrence photo-identification catalogue and to further the study of entanglement rates in fin and blue whales.

In red, the areas of the body where fishing gear is most likely to get entangled. Entanglements in fishing gear leave characteristic scars of friction and slicing. © MICS Photo

In 2019, we approached 107 animals during flight operations. From these approaches, we were able to extract a total of 576 images from the video files. From these images, we identified 48 individuals, 44 of them with a complete set of AVF (aerial view front), AVP (aerial view peduncle) and fluke photos. At least three of the individuals showed fresh entanglement scars from this year.

Over the next few years, we hope to increase the sample size. After several consecutive years, we will be able to study the number of animals with new scars or with recurrent scarring, which will allow us to quantify the annual rate of entanglement and thus the magnitude of the problem.

We also had the opportunity to use the drone to observe other species. North Atlantic right whales were present in the area all season, and we were fortunate to witness interactions between two individuals: #3890 and #3810 (identified by the New England Aquarium, USA). Thanks to the drone, we were able to observe their behavior. For more information on this species, please read the article: “Portrait of an endangered species: The North Atlantic right whale”.