An armada of whales head into the St.Lawrence

On June 10th 2019, aerial surveys revealed a large group of baleen whales south of Bonaventure Island off the coast of Gaspé. A few days later, on the 18th and 19th of June, our collaborator René Roy, working from the Bay of Gaspé, found whales both inside the bay and 6-8 miles outside the northeast side of Cap Gaspé. René reported that he was surrounded by spouts and estimated nearly 100 baleen whales in the area. He observed several species including humpback, fin and blue whales, all in a moving front and feeding on krill. How was their prey determined? Simply by the fact that the animal’s feces was brick red, indicating that krill was the main prey being consumed at that time. This red coloration is due to the keratin found in euphausiids (krill). Blue whales are krill specialists, whereas humpback and fin whales are generalists and will feed on a combination of krill and fish such as herring, capelin, mackerel, and/or sand lance. 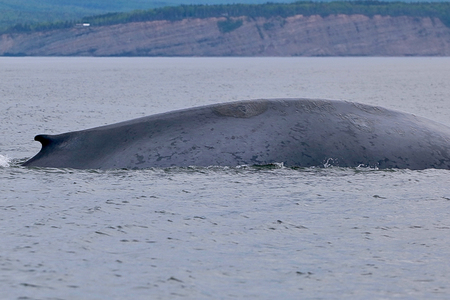 New scars on the back of B194 (Hippocampe) ©René Roy, MICS

Such a joint movement of mixed species of whales into the area is impressive and we were lucky enough to get photo-IDs of several humpback and blue whales. Based on preliminary matching within our photo identification catalogue, at least four of the blue whales observed had never been sighted by us previously. However, several blue whale individuals were identified: 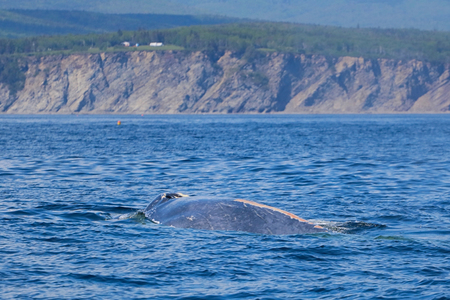 The fieldwork carried out by MICS as the summer progresses will reveal more about the movements of the individuals mentioned above and others entering the St Lawrence. Hopefully we will be able to deploy satellite tags on several of these animals to learn more on the details of their dispersal within and outside the St. Lawrence.

It is important to note that around this time last year, 7 blue whale calves accompanied by their mothers had already been sighted. This year, despite a good number of blue whale sightings, no calves have been reported to date.

Why is there an apparent baby-boom last year but no evidence of calving in this population this year ? What could this mean for the blue whales ? These are the questions we are still striving to answer with our ongoing research.