[This blog was originally published on the Royal Ontario Museum's website on March 8th, 2018, and edited for MICS's website] 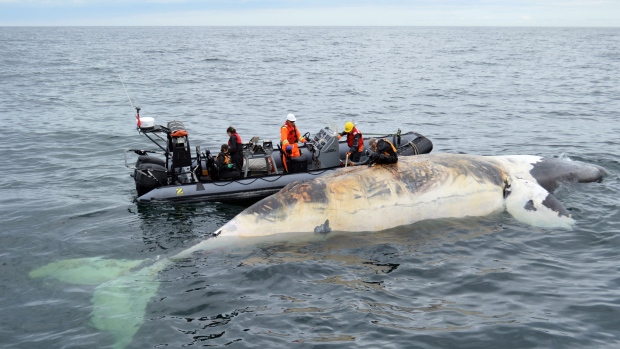 A floating right whale carcass in the Gulf of St. Lawrence. Found and analysed by scientists. Photo by DFO and The Canadian Press

Right whales were featured heavily in the news throughout the latter half of 2017 for dire reasons. Between June 7th and September 15th, 2017, twelve dead right whales were discovered in the Gulf of St Lawrence. Combined with the five deaths recorded in US waters, it brought the total up to seventeen. We have barely started a new year and already the first right whale death has been reported in the USA — a 10-year-old female last seen in the Gulf of St. Lawrence.

So, why all the uproar and media coverage? For a species that was hunted to near-extinction during the whaling era and whose latest population estimate stood at 451 individuals in 2016; the death of 17 whales represents a loss of over 3% of the population — all within a mere four months. Necropsy reports have determined that ship collisions and entanglements with fishing gear were the main causes of death for these animals.

The significance of this loss has sent the scientific community into a panic and led the government to take action. Mark Baumgartner of Woods Hole Oceanographic Institution has predicted that these breeding females will disappear within two decades at the current rate, meaning that if nothing changes, the population could be condemned to extinction by 2038. Christian Ramp of the Mingan Island Cetacean Study (MICS) explains, that a female must essentially replace herself within the population to ensure the viability of the species, which is currently not happening. “They now die quicker than they reproduce. [In 2017] we didn’t see a single cow-calf pair in the St. Lawrence”, says Ramp. 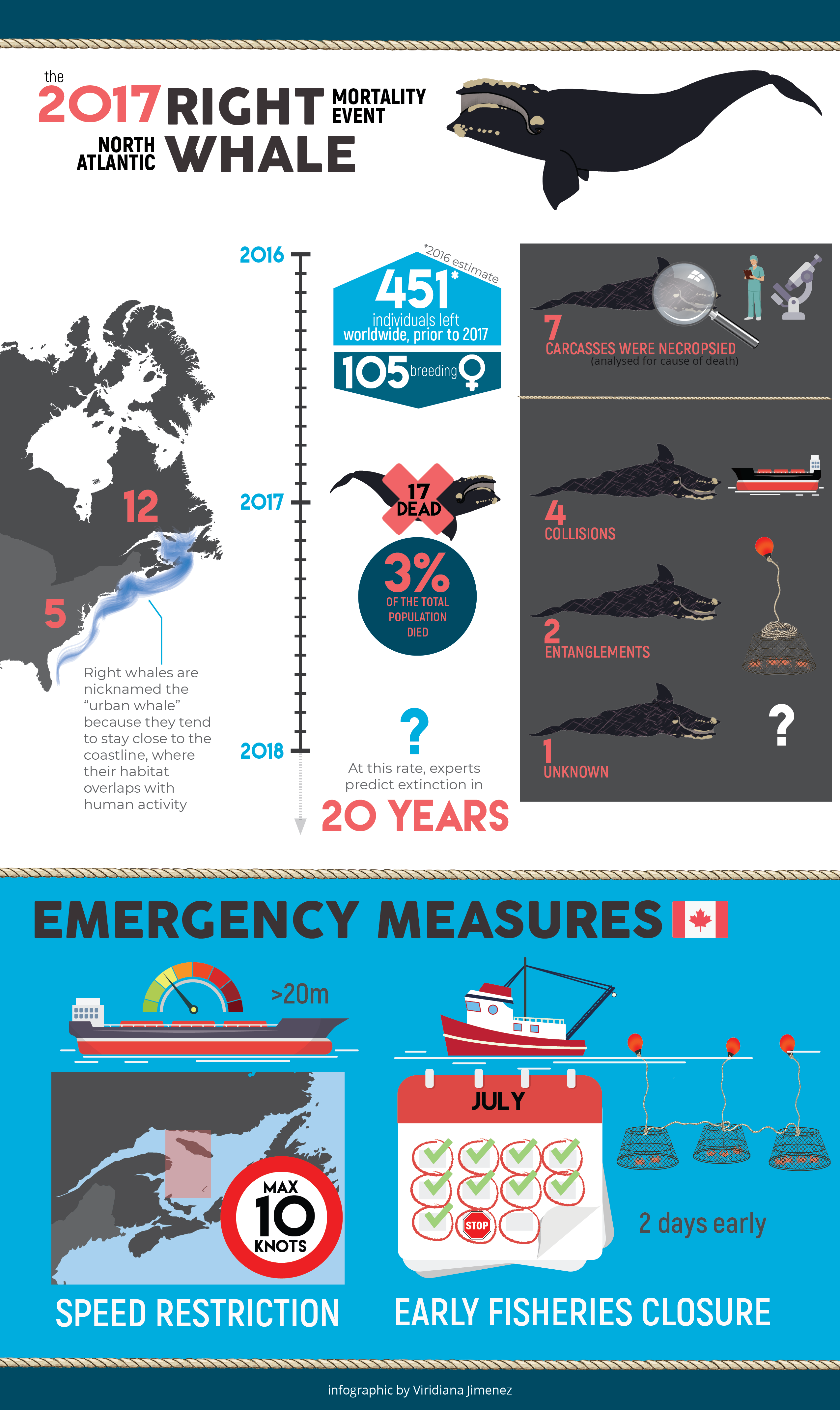 Females who survive entanglements still need time to recover, which results in lower reproductive abilities and success. Therefore, not only are right whales dying, we are further reducing their reproductive rate through ship strikes and entanglements via fishing gear. This may be one of the underlying reasons why there is an absence of calves this year — a first since surveys of right whale calving grounds began in the 1980s — amplifying the gravity of the right whales’ already precarious situation. 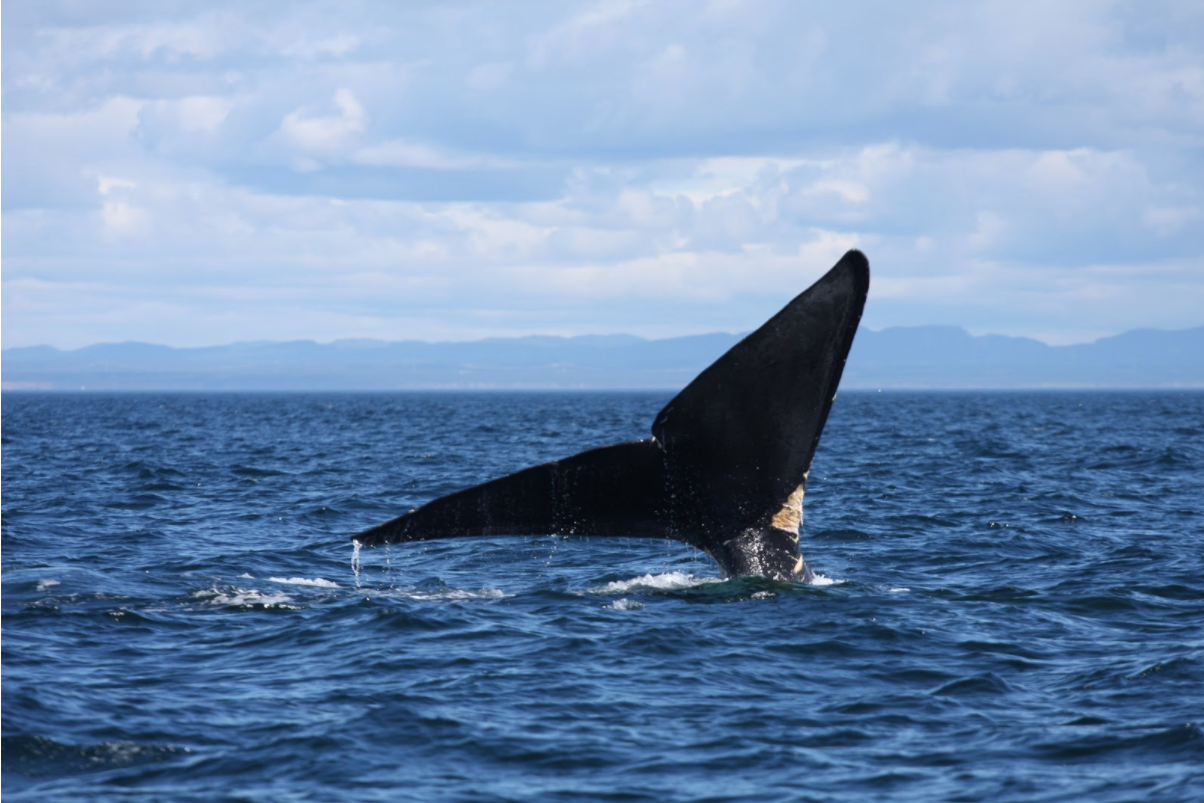 [The fluke of a North Atlantic right in the Gulf of St. Lawrence on July 2017; a scar is visible on the leading edge of the fluke, caused by entanglement from fishing gear. Photo by MICS]

The North Atlantic right whale is an endangered species that is listed under the Species at Risk Act (SARA). This means that Canada has a ‘duty’ to put in place measures to protect our whales from harm and to support their recovery. In keeping with its conservation commitments, the Department for Fisheries and Oceans (DFO) and Transport Canada took legislative action in the summer of 2017, following a statement from DFO Minister Dominic Leblanc: “We’ll do what we have to do, to ensure not only the protection of North Atlantic right whales, but also the recovery of this species as well”.

One thing that has aggravated the problem is the right whales’ recent shift in distribution. There has been a notable increase in whale numbers within the Gulf of St. Lawrence since 2015, with a peak in 2016. This is a shift away from their usual summer feeding grounds in the Bay of Fundy, and climate change may be the driving force behind this shift. “We know that more warm water gets into the Cabot strait from the Gulf stream” says Christian Ramp. This is likely to impact the right whales’ primary food source: Calanus, a small species of zooplankton. “Calanus is a cold-water species. If the water warms up, they move north.” 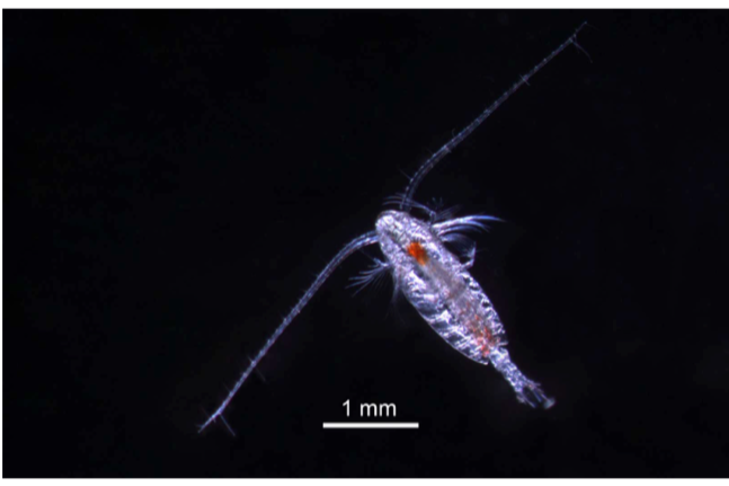 Collisions with ship traffic have been an ongoing problem with many species of large whales worldwide, and right whales are particularly vulnerable because of their low profile at the surface and slow swimming speeds. Unfortunately, due to the high speed of ships travelling in the waters of the Gulf of St. Lawrence (up to 25 knots or 46km/h), most ship strikes are lethal. Actual mortality numbers are difficult to account for, as some carcasses float, while others sink to the bottom of the ocean.

Since the summer, multiple research organisations, in collaboration with DFO and Transport Canada, have been working in tandem to pool together information and propose solutions to this issue. “You have to find the overlap between whales and the industry. And of course that is difficult because Canada has huge coastal waters.” says Ramp. The St. Lawrence river is one of Canada’s (and the planet’s) busiest areas in terms of maritime traffic. More whales moving into this 'high seas highway' is already proving to be a deadly combination. 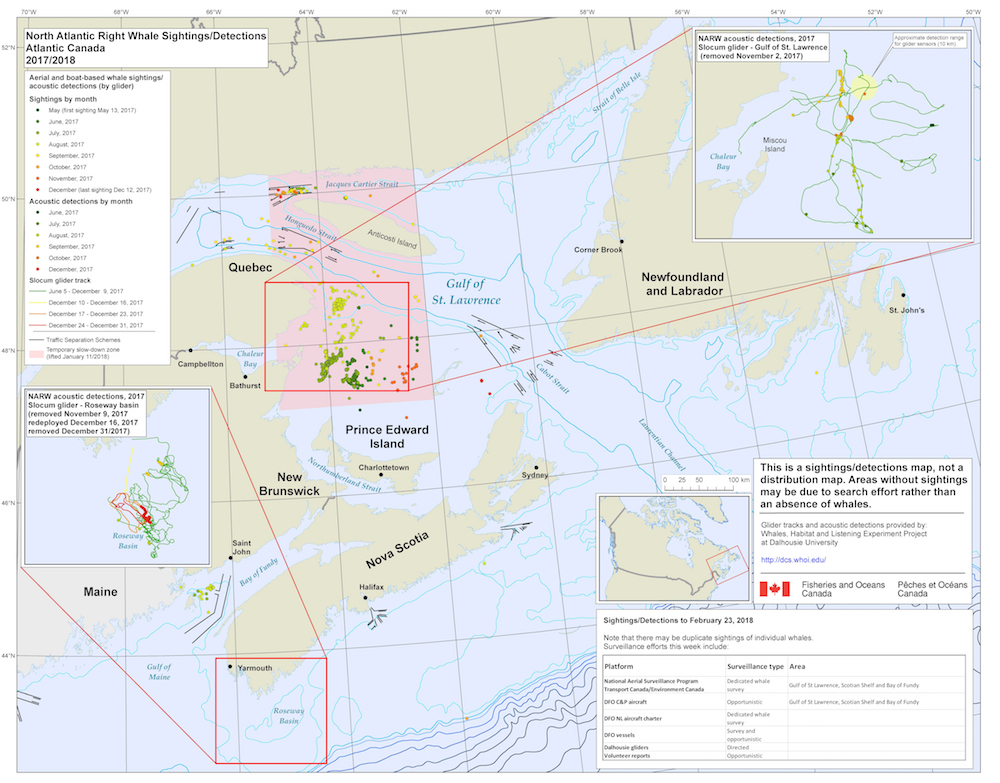 Responses from Industries Impacted by the Emergency Measures

The shipping industry initially met the 10 knot speed restriction that was imposed by DFO with resistance. Captain Sid Hynes, executive chairman of Oceanex, stated that “the impacts [of the speed restriction] would be huge financially as well as directly, because time is money.” In an interview with CTV News, Sonia Simard of the Shipping Federation of Canada, stated “If you add time to the voyage – time is of the essence for marine transportation – it would mean extra costs for the ship owners and it could eventually translate into extra costs for the goods”. Additionally, officials predicted a $2.5 million loss for the Gaspe region’s tourism industries - cruise ships cancelled some of their stops in the area to make up for time lost due to the speed restriction.The Shipping Federation of Canada has stated that they share the objective of reducing right whale-ship collisions, but are hoping for a more refined solution that will minimize regional and national economic impacts. 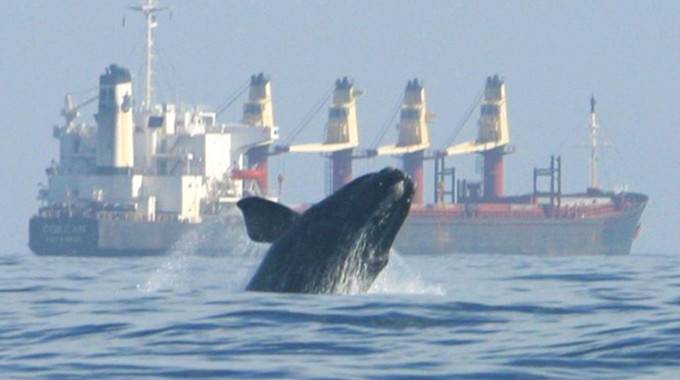 [Ship collisions identified as the main cause of death for right whales necropsied during summer 2017. Photo by Florida Fish & Wildlife Conservation Commission]

The effect of the federal government’s right whale emergency measures on the fishing industry had a less severe impact, as the fishing season was nearly over by the time the early closure was enforced. Due to the rate of right whale entanglements in fishing gear, there will be a strong focus on making equipment more “whale-friendly”. When prompted about new, modified fishing gear, a North Shore fisherman who wished to remain anonymous responded with a sceptical, albeit encouraging tone, outlining the difficulties and preoccupations he foresees with new gear, while “being open to experimenting with new gear if it can save the whales”. 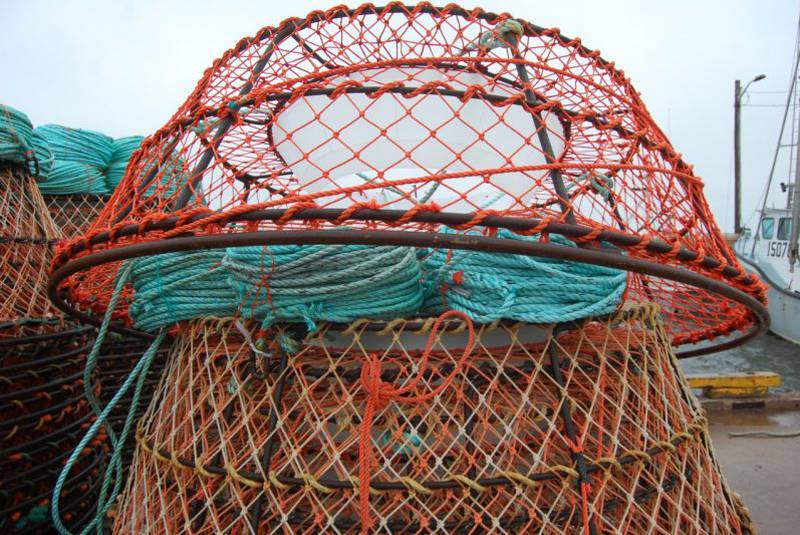 [Pots used to capture snow crabs are linked by thick rope, right whales often get entangled in them. Photo by Eric McCarthy]

As we enter 2018, what actions are being taken to protect the North Atlantic right whale?

It certainly seems like both the shipping and fishing industries are inclined to collaborate to help reduce the loss of right whales. Bruce Burrows, President to the Chamber of Marine Commerce, said: “We’re pleased to see the speed restrictions lifted as our ship operator members continue winter deliveries of vital products to Canadian companies and northern communities. We are working in tandem with the scientific community and government officials over the winter to develop solutions based on strong science that both protect North Atlantic right whales and minimize economic impacts for all Canadians.”

[What are we doing for right whale conservation in 2018?]

DFO continues to hold regular meetings focusing on right whale conservation and management. In addition to the federal actions and measures, a large group of stakeholders has been meeting as part of the North Atlantic Right Whale Consortium (NARWC). The Consortium, consisting of both non-governmental and governmental organisations and individuals, including scientists, conservationists, and representatives of the fishing and shipping industries, who were brought together to discuss the critical situation and to discuss further measures that need to be taken to ensure right whale recovery. “I think if we’re going to be successful for right whales we have to work with coexistence” states Moira Brown, a right whale expert at the New England Aquarium and the Canadian Whale Institute. At the Consortium meeting in Halifax last October, she stated that she was “encouraged by the good response of both the fishing industry and the shipping industry to see how they can alter either their seasons, their timing, or their gear to reduce and prevent whale deaths”.

What role do we, the public, play in all this?

The right whale story has garnered much attention and support from the general public thanks to media coverage on all platforms including television, newspapers, and social media. Moira Brown believes that “[the public] has a role to play...There’s letter writing and emails to stay on top of the issues and help us by writing to politicians to let them know you’re interested, to let them know that it’s not just some researchers that are interested in this species, but that as a Canadian you’re interested in this species and I think that’s really important.”

[Photo of a right whale necropsy posted on Facebook. Photo by Joey-john Stewart]

One way or another, Canada has huge stakes in saving the right whales. It is clear that collaboration between stakeholders is key, and most importantly, everyone has a role to play in ensuring that the North Atlantic right whales are not forgotten.

There is an ever-increasing awareness of the threats to our oceans. An Ocean Symposium was held at the Royal Ontario Museum in December 2017 that brought together some of DFO’s highest officials, representatives of Canada’s main marine research and conservation organisations, along with ocean users, storytellers, and Indigenous representatives to discuss the future of our oceans. Now it’s time to continue the ocean conversation.

For more information and updates on right whales, visit the Department of Fisheries and Oceans (DFO) website. 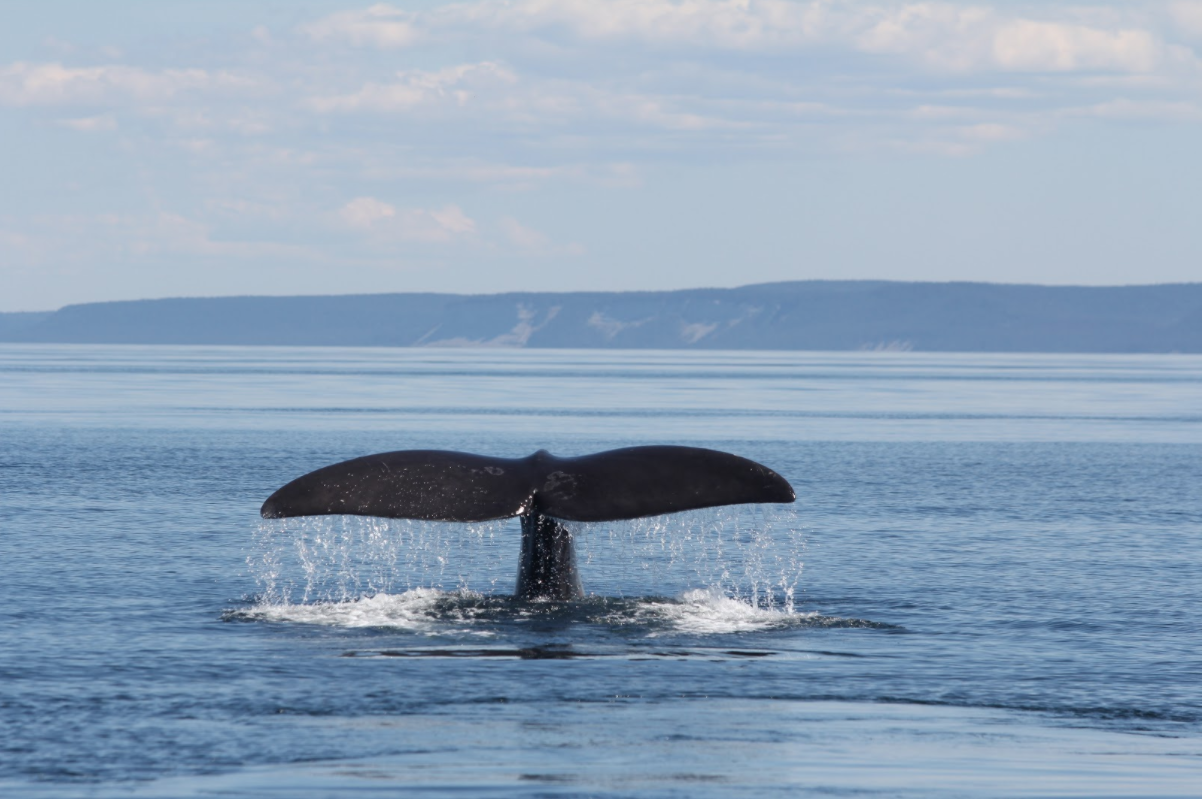 [A right whale dives into the rich waters of the St. Lawrence, July 2017. Photo by MICS]