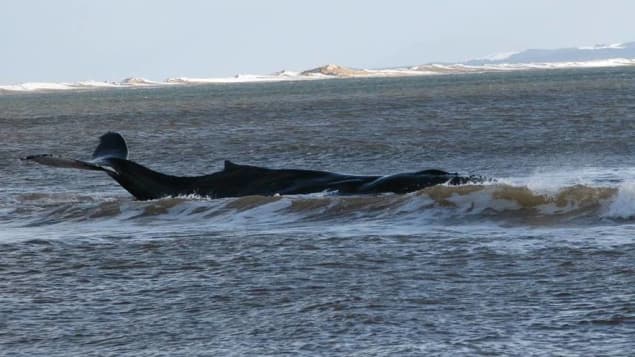 Humpback whale that stranded alive on the coast of the Magdalen Islands. Photo by Daniel Cyr.

The following is an opinion piece about live strandings by Dr. Christian Ramp, Research Coordinator at MICS.

The 2018 season has not yet started and already two dead humpback whales were reported in Atlantic Canada. The second one was washed ashore alive last Sunday and died within a few hours on a beach on the Magdalen Islands. It might have been a yearling born in 2017 that did not survive the weaning process from its mother. A humpback whale usually stays with their mother for 10-11 months and get weaned in the late fall to early winter. They start feeding on their own while still with their mother, but after that, they need to survive on their own. This moment in the life history of a humpback whale is one of the most dangerous ones, which sees the highest mortality. As with all mammals, humpback whales have U-shaped mortality curve with most deaths occurring both at a very young and very old age, while in their prime it is close to zero. We must not forget that that many whales also die due to natural causes (i.e. age, illness, parasites) and we cannot help them. This is also part of their life.

As to live strandings, there have been a few videos circulating around on social media recently where people succeeded in refloating a baleen whale in a joint effort by pushing and pulling the animal back in the water. This has been heralded as a great sign of humanity and it is indeed admirable that some people care so much for other species. Unfortunately, there is no evidence that any baleen whale has survived after being refloated by humans. For the purpose of this article, we will not mention strandings of smaller toothed whales such as dolphins, because these are completely different cases, one of the main distinctions being the weight of the animal. Thanks to the reduced physical constraints of living in water, baleen whales have evolved to enormous weights and sizes that no bones could carry on land. Once they are beached on land, their own weight crushes their inner organs. Most animals refloated by humans were found dead hours or days later, floating or washed ashore again. Another reason why refloated whales don’t survive is because strandings tend to happen to animals with already severely impaired health or other injuries – it is extremely rare for healthy baleen whales to strand. Most stranded whales are emaciated, which could be caused by old age, parasites, sickness, or a variety of human induced factors. The sad truth is that once a baleen whale is washed ashore its chance of survival is next to nil.

While we focus on the biological and scientific reasons in this case, there is also an animal welfare question which needs to be addressed. Pulling and pushing an animal back into the water might cause the animal even greater pain and stress. There needs to be a discussion about euthanasia for fatally injured animals and other cases where the animals are beyond help.

There is also the question of human safety. A dying whale splashing its tail or just even a carcass moved by the surf poses an enhanced risk of injury or death for humans. MICS advises people not to approach the stranded whale on their own, even if the sight is heartbreaking. Please contact the local emergency networks (Quebec 1-877-722-5346, Maritimes 1-866-567-6277, Newfoundland-Labrador 1-709-895-3003 or 1-888-895-3003, anywhere in Canada: DFO 1-800-465-4336) or the local Fisheries Officers (any law enforcement can contact the correct stations). There are also legal restrictions prohibiting the public to approach certain species.

Veterinarians will conduct a necropsy on the dead humpback whale in the Magdalen Islands. Data that comes from these necropsies is important, because they show us the magnitude of human impact on these species. Entanglements, ship strikes, plastic bags blocking their esophagus or filling their entire stomachs… the list of human-induced mortality causes in whales is very long. And that is where our compassion should lead us: to fight the causes, not the consequences.

Our responsibility is not only to the individual whales but to their entire ecosystem. It might be more satisfying and an obvious response to help one individual in distress, but to truly help these animals we must alter the way we live and consume. Using less plastic, less oil, buying local, eating certified seafood… these small changes – if made by many – will make the difference.

ADDENDUM: The results of the necropsy have confirmed that the stranded humpback whale in the Magdalen Islands was indeed a female yearling that did not survive the weaning process: