Eat your heart out! Story of a feeding frenzy 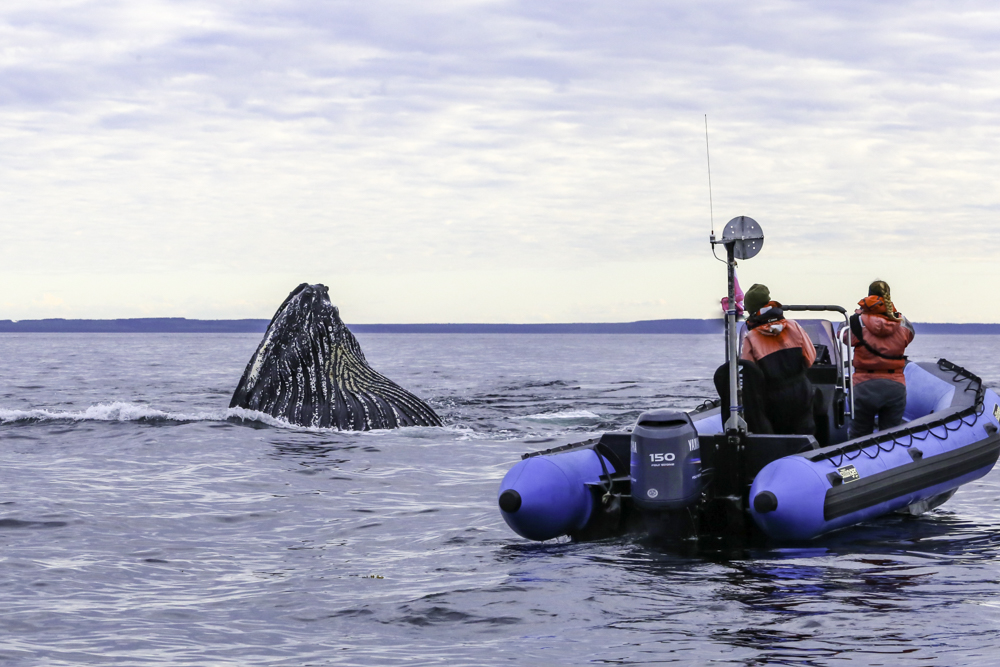 A humpback whale lunge-feeds on fish close to Sirocco

It was as if a dinner invitation had been sent out to all species in the Mingan-Anticosti region of the Saint Lawrence.

It had been a windy couple of weeks, forcing us to stay on solid ground. It was therefore with excitement and eagerness that we left the port of Ekuanitshit (the indigenous name for Mingan) that morning, our two boats taking a Southeastern course between the Mingan Islands.

The day began much like our previous trips -- without much sign of life apart from a few grey seals that surfaced to breathe and watch us as we passed. It was not until we approached Anticosti that we saw the first blows. Four fin whales were relaxing in the same area, but they didn’t give us much to photograph, barely lifting their dorsal fins from the water. The increasingly thick cloud coverage also rendered our photos of their “chevrons” (the distinct pigmentation on fin whales, located on the right side, just behind their heads) less and less useful for photo-identification. It was time to continue our route, this time towards the West. 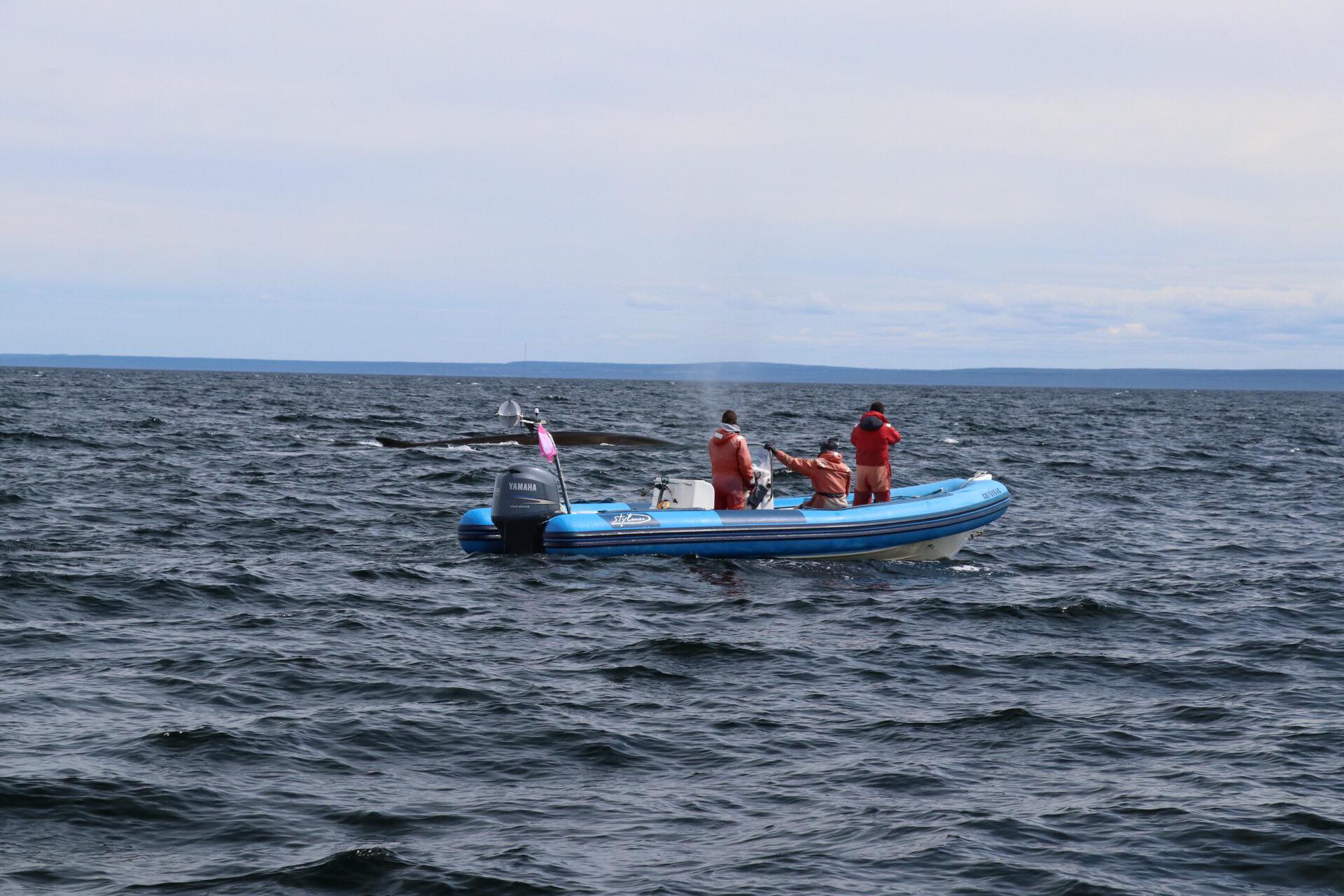 The two boats took a similar course, separated by the usual two nautical miles to cover more 'ground'. While Mistral continued its course, devoid of blows, the team on Sirocco encountered a couple of solitary fin whales along the way. Yet the previous scenario repeated itself: the spouts were difficult to see due to haze and dark skies.

Later on, the team aboard Mistral contacted Sirocco over the radio: “We found some whales. If you don’t have any whales in your area, we suggest that you join us here”. So, the team on Sirocco started out towards Mistral’s position, stopping periodically to photograph the occasional scattered fin whales along the Anticosti coast.

Once again Mistral came on the radio: “You should come here. Fast.” The team on Sirocco stopped photographing the fin whales and changed course towards Mistral.

As soon as Sirocco arrived at Mistral’s location, it was easy to understand the urgency in their radio call. Mistral was in sight, a tiny spot on the horizon. It was then that we saw the spouts. One after another, jetting vertically into the air, all around Mistral. Then we saw them. Their huge, dark bodies propelled out of the water surface. This technique -- known as “lunge-feeding” -- is typically used by rorqual whales to feed, only it often happens below the surface. They launch their bodies at high speed towards a school of prey (fish or krill), opening their mouths wide at the last second, and engulfing an enormous amount of water and food, thanks to their large extensible ventral pouch. They then flush the water out through their baleen, harvesting prey like a giant colander. 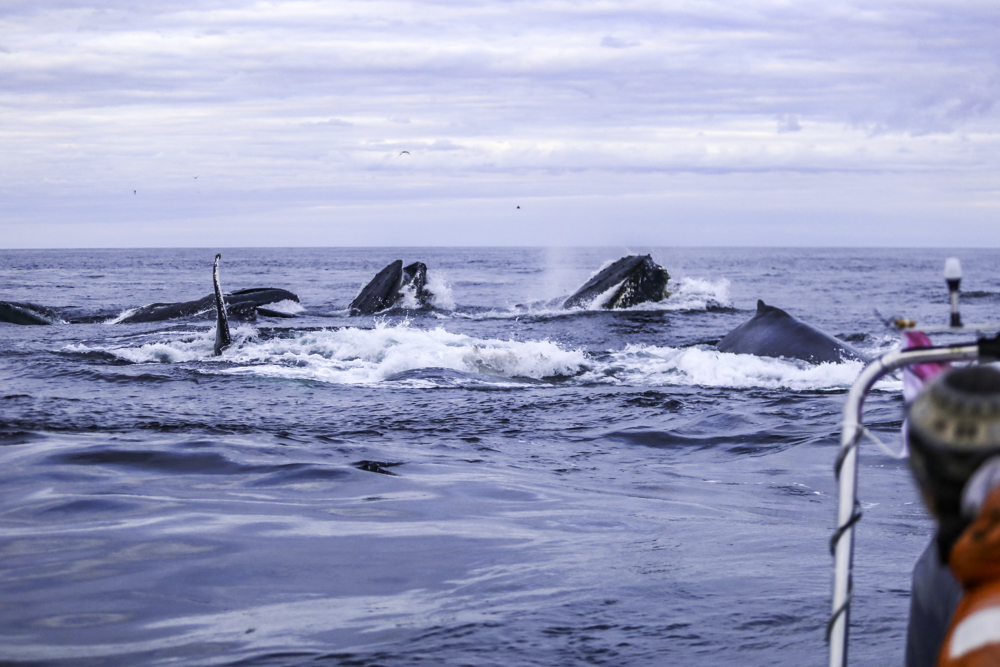 A group of humpback whales lunge-feeding at the surface

When we arrived closer to the scene, we noticed the incredible number of species present: fin whales, humpback whales,  minke whales, gannets, Arctic terns, gulls, groups of harp seals… This area of just a few hundred square meters was teeming with life, and it was easy to understand why -- as we bent over the water we saw tons of capelin swimming in dense schools beneath the surface. The Saint Lawrence is known for being a summer feeding area for many species, including whales, thanks to its unique underwater topography that push up nutrient-laden cold currents to the surface (a phenomenon known as "upwelling"). 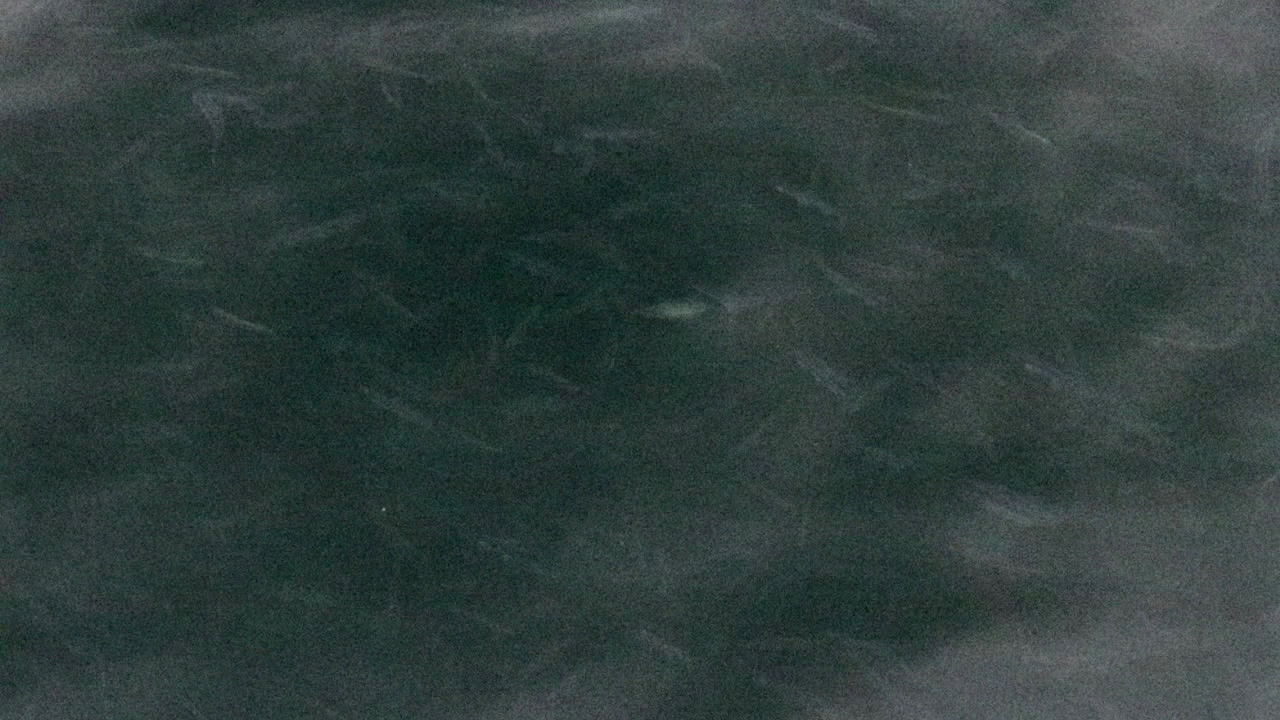 A school of capelin, visibly swimming at the surface. 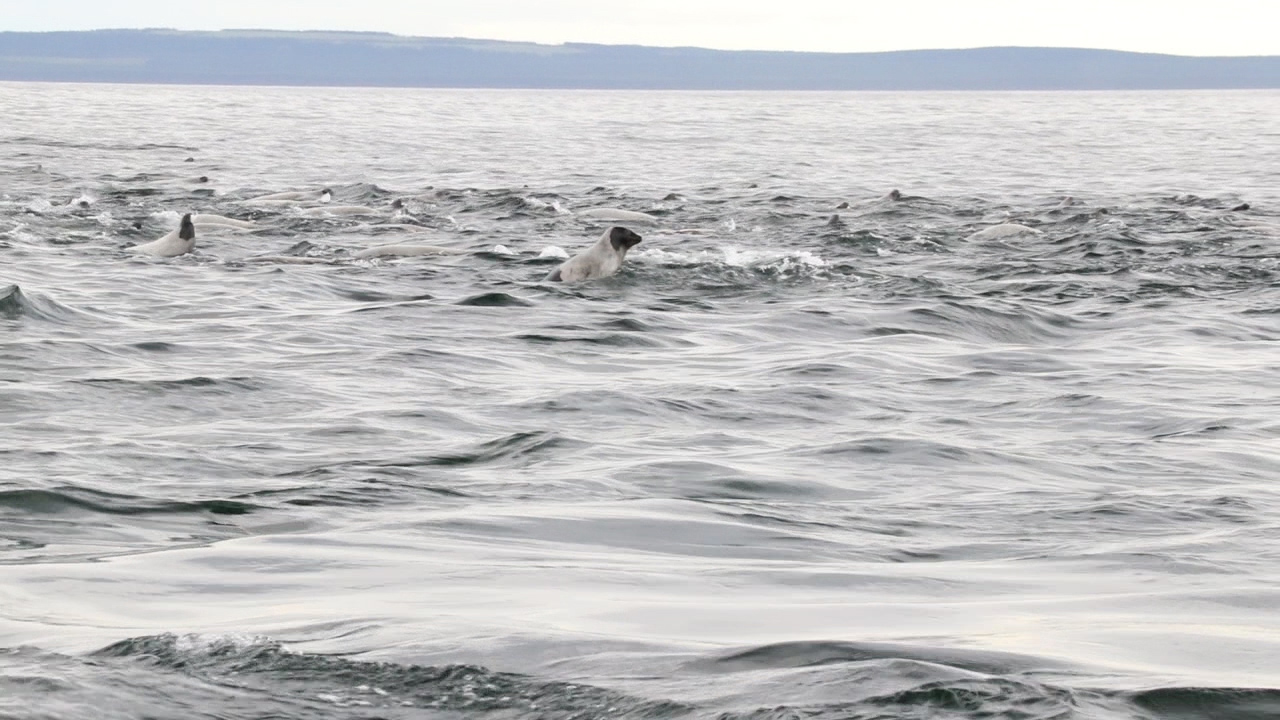 Harp seals are often found in large groups of tens, even hundreds of individuals, and can often been seen swimming on their backs.

The two boats approached slowly, one next to the other, to discuss a strategy: how were we going to photograph all of these individuals? “It’s crazy! They are everywhere!”, said Christian, “They’re lunge-feeding, it’s impossible to follow them… Take any photo you can, and we will try to distinguish individuals later. There is a humpback whale mother with her calf, make sure you get pictures of them!”

We separated and slowly, carefully, navigated our way through the groups, ensuring that we didn’t collide with anything. We moved into two strategic positions to try to spot as many animals as possible. 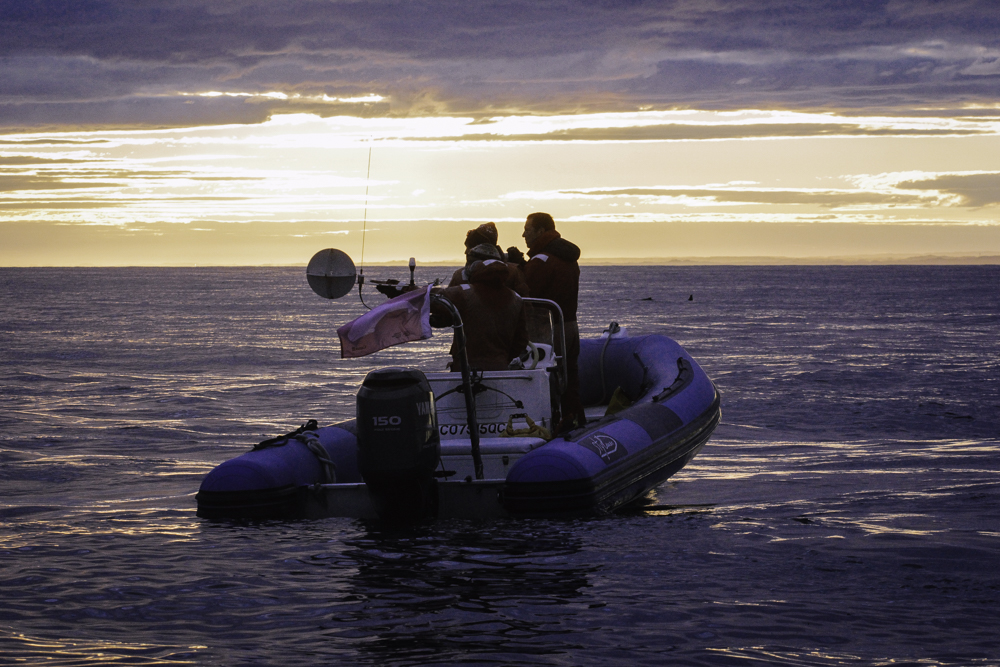 The team on Mistral positioning themselves strategically

The moments that followed were of organised chaos. From our boats, we had the impression that we were watching a free-for-all. At times, the seals began to stir, giving the impression that the surface of the water was boiling; at times, groups of five humpbacks would break through the surface waters in total synchronicity. It seemed as though what we perceived as chaos on the surface was actually a perfectly coordinated underwater ballet. 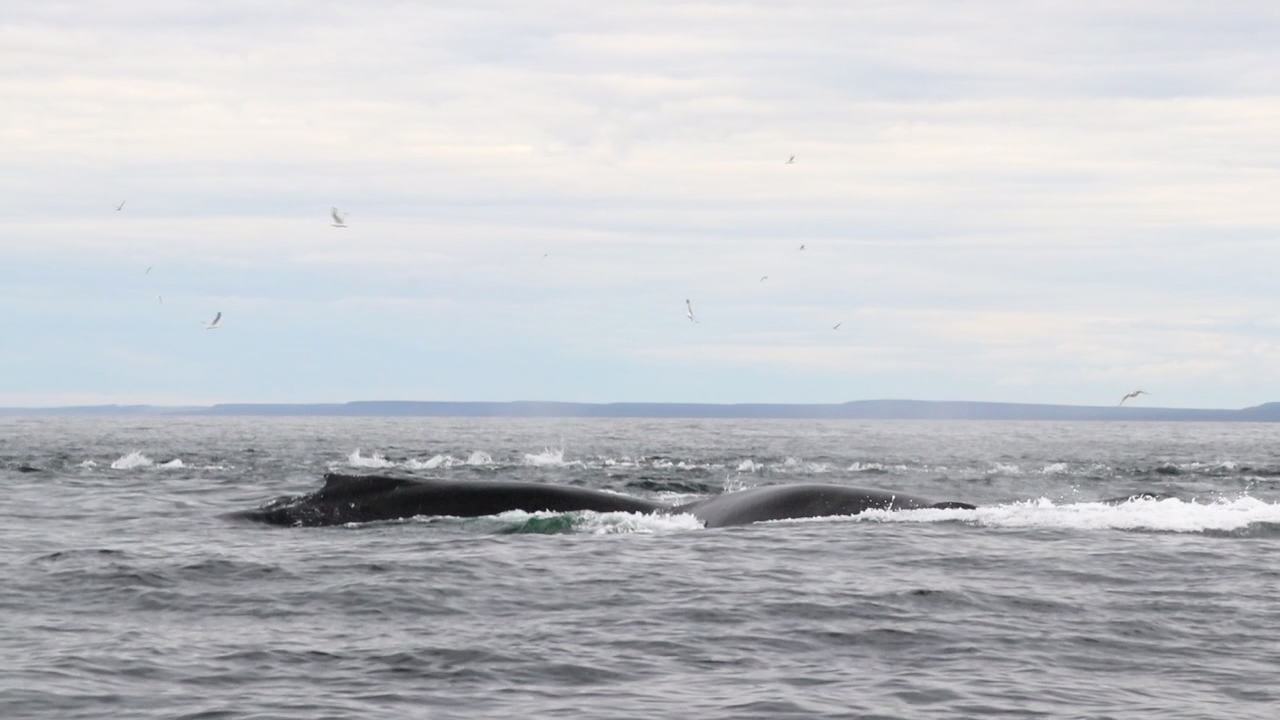 A group of harp seals gets agitated behind the humpback whales as marine birds fly over the scene. 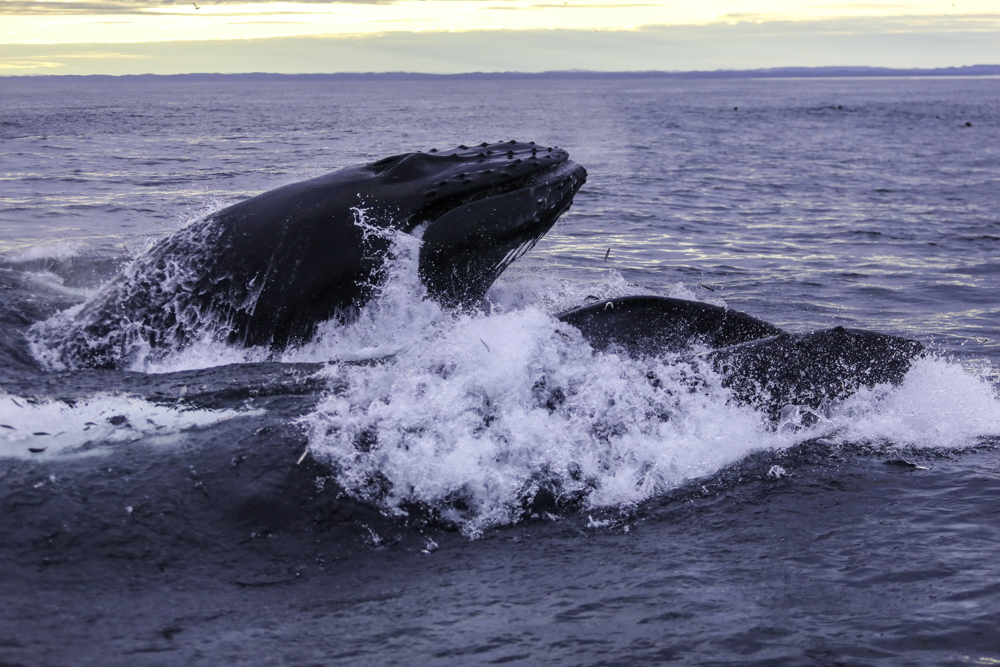 Humpback whales launching themselves out of the water as they lunge-feed at the surface. 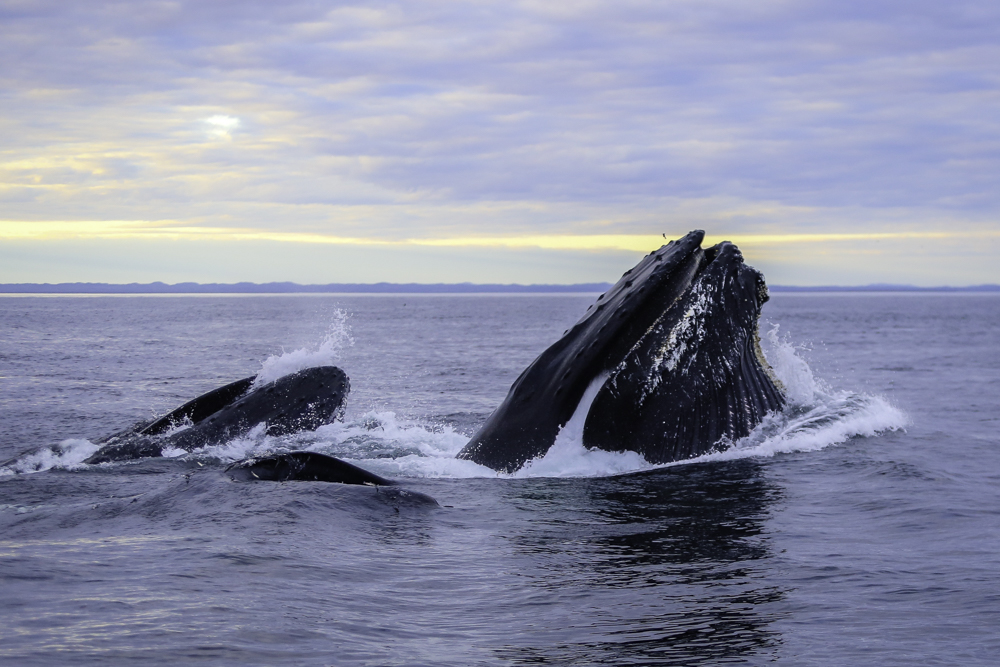 We can clearly see the water streaming out of the corner of the humpback whales' mouths.

As time passed, we began to anticipate where the animals would surface. We sometimes had a mere half-second warning, when the surface of the water began to simmer under the flapping of the capelin as they frantically tried to escape the mouths of their predators. It was then with complete euphoria that we observed the large rostrums pierce the surface of the water, engulfing vast quantities of fish.

There were times when, despite ourselves, we were so engrossed in the scene that we forgot about our mission as scientists and lost ourselves in the moment. We sometimes gazed over at each other, mouths open, cameras down, transfixed by the grandiosity of the show. 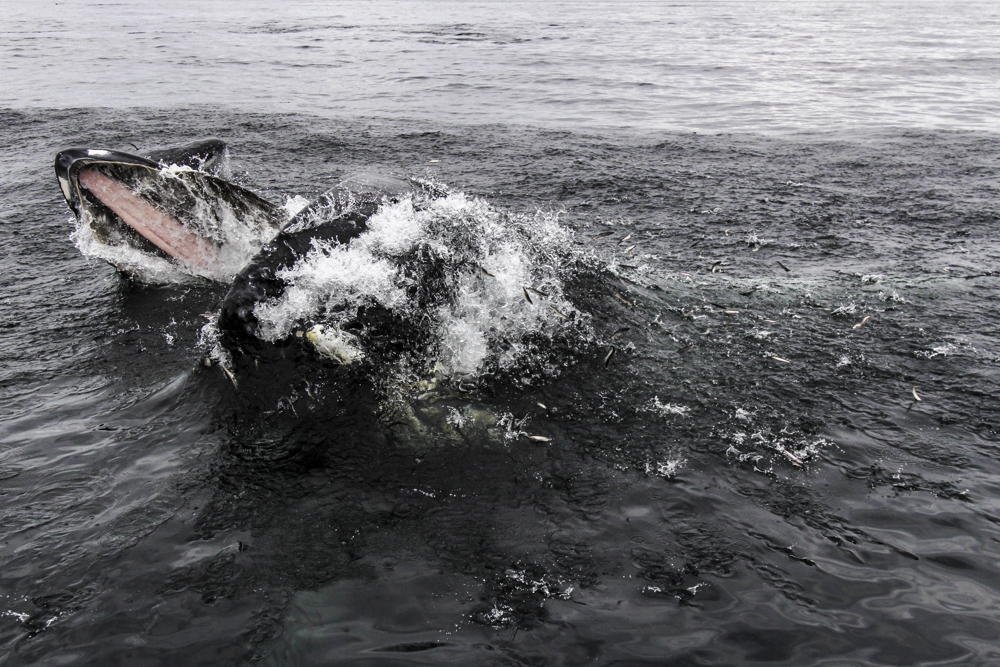 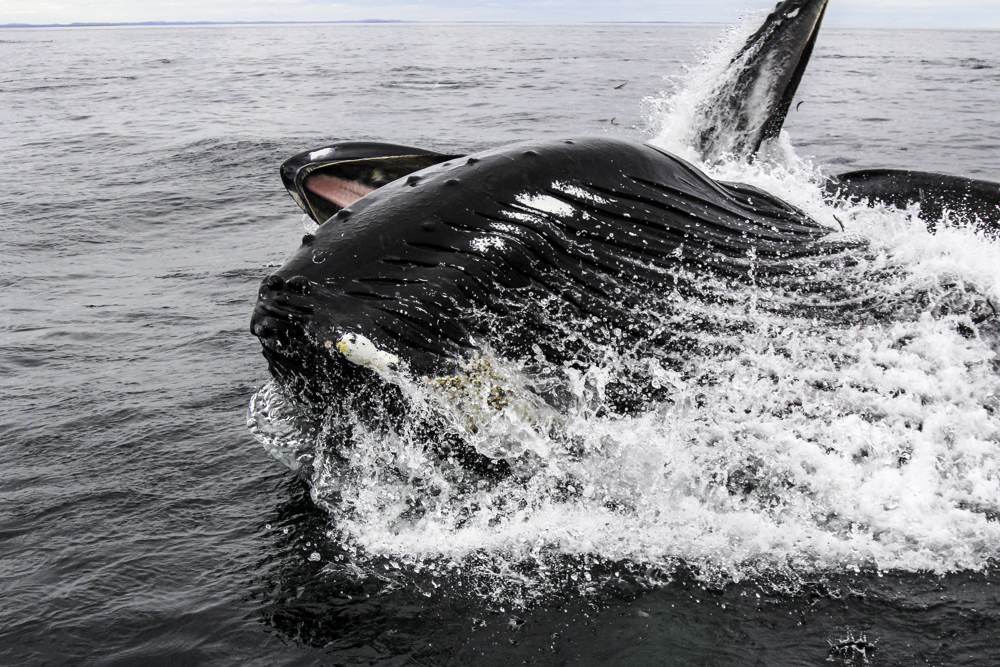 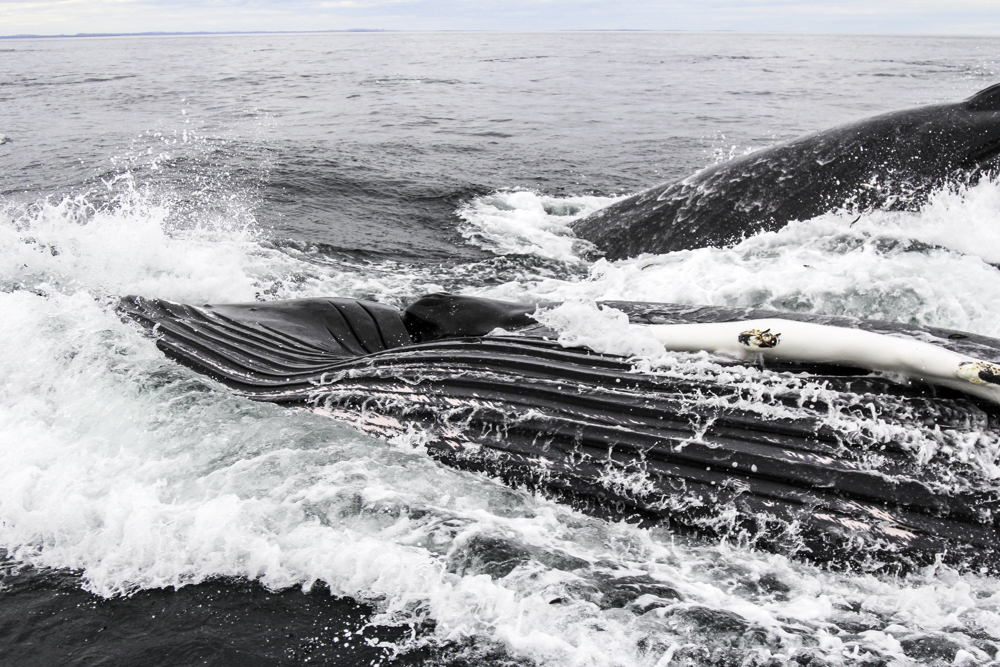 Humpback whale lunge-feeding sequence. We can see the capelin fly out of the water, a fully extended ventral pouch, and eventually the eye appears (bottom).

As the sun began to set, we were forced to stop our photo-identification efforts and head back to the harbour, knowing that we still had many miles to travel before arriving at Ekuanitshit (Mingan). It was in the glow of a warm orange light, under a heavy sky and on a silvery sea, that we returned to the dock, our heads swimming with images of the perfect whale ballet... 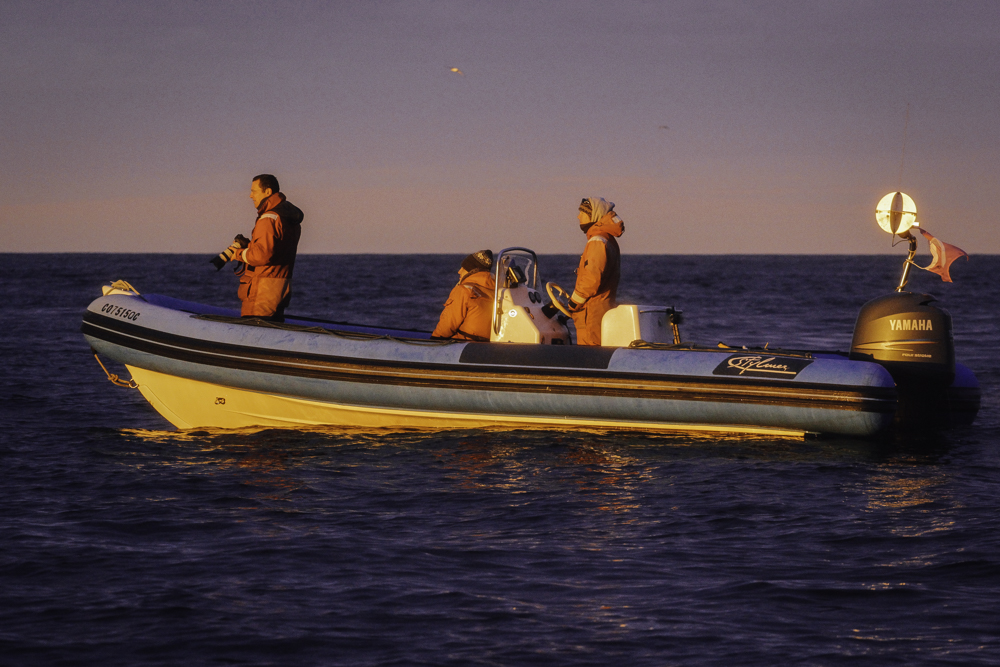 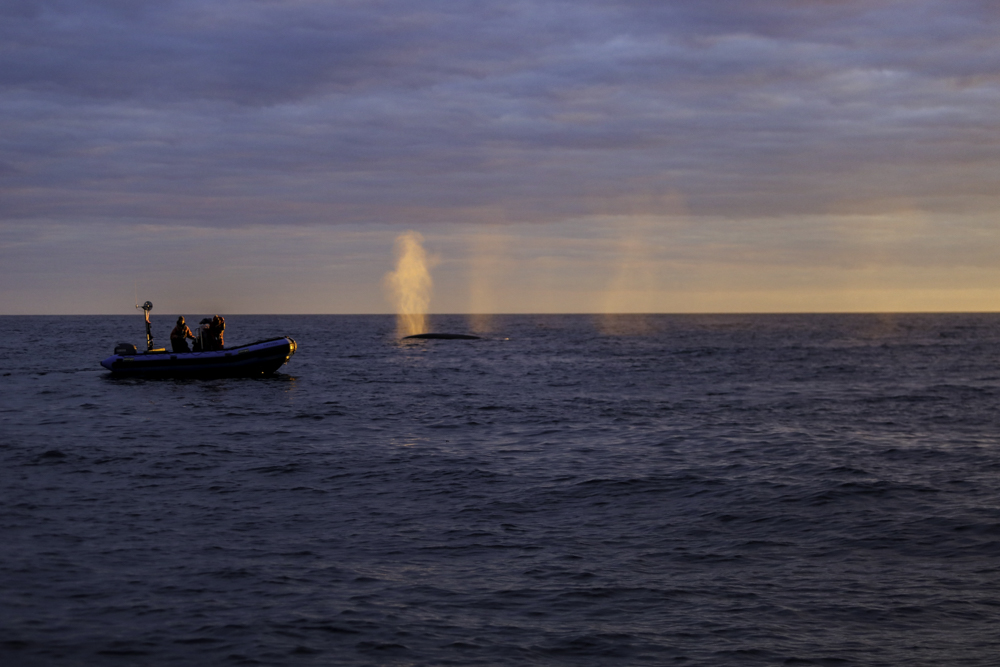 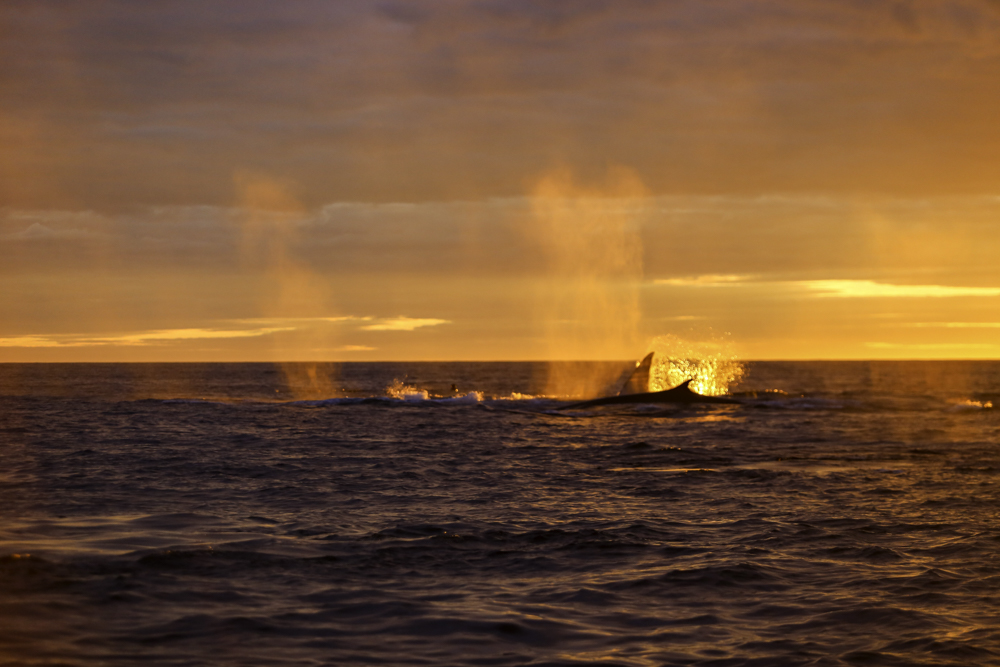 And last but not least; a short video of the action!