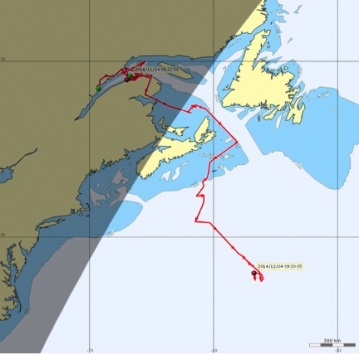 B244 a female blue whale named Symphony was first seen in the St Lawrence during the summer of 1988 and has returned quite regularly since then. Despite a very low number of blue whales sighted in the St Lawrence in 2014, B244 was observed in the Estuary off Forestville in October. And on November 4th a satellite tag was placed near her dorsal fin while Symphony was foraging off Forestville. There it stayed for about 2 weeks before deciding it was time to leave the St Lawrence and travelled in a few days to the tip of Gaspe, and on quickly to the Magdalen Islands before heading through Cabot Strait mid November. Symphony chose a route along the western edge of the Laurentian Channel until it reached the Scotian Shelf, where she turned sharply right and travelled SW along shelf waters. On November 22 she headed offshore and eventually reached a point about 1000km out in the North Atlantic, before doubling back to the shelf and coastal waters by December 17. She then headed west and south across the mouth of the Gulf of Maine, and spent time on and off the shelf off Delaware Bay by early January, where it spent a few days then proceeded south as far as the Carolinas. The last we had heard from the tag, after nearly 3 months the whale was working an area off Cape Hatteras on and off shelf waters late January. The details of its travels along with those of other blue whales tagged over the last 5 years will be reported in a scientific journal in the near future with much more detail. However, suffice to say we have already learned a great deal more than we knew concerning winter movements of blue whales. And even though the latest information comes from only one whale, we hope to add much more dispersal data in coming years. We will undoubtedly be further surprised by their travels and winter distribution. This data along with our cross Atlantic 30yr photo-ID match indicates how much more there is to discover and that we need to study these animals in terms of whole ocean basins not just coastal shelf waters.

This satellite-tagging program is a collaborative project between MICS and Dr Veronique Lesage of DFO. 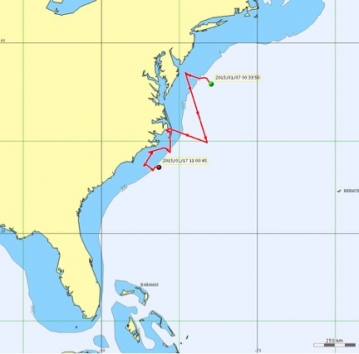