The 37th season was marred by extended cool, foggy dampness, and endless windy rain pelted days early on.  By late July, however the elements seemed to remember that summer needed to have its moment.  And the brief glimpses had by our team of finbacks and minkes in good numbers along the North Shore to BBR and out towards the western end of Anticosti, gave way to a full view of a productive ecosystem filled with as many as 60 fin whales and perhaps more than 100 minkes, throughout the Jacques Cartier Passage.  In fact 100 minkes were sighted on a single day between This season’s pattern appears similar to what we experienced in the 80s, though blue whale continue to be rare visitors along this section of North Shore.

During the summer of 2014 we did not see one blue during our fieldwork off Gaspe or during our trip aboard Sedna IV to Cabot Stait. See earlier 2014 newsletter. A four-year downward trend was reversed in 2015, which yielded 72 individual blue whale IDs.  Most were found between Anse a Valleau and Cloridorme 30nm west of Cape Gaspe.  Ian McQuin of DFO, conducting a euphausiid survey along the northern Gaspe coast reported several blues off Anse a Valleau in early August.  His surveys there revealed large concentrations of krill, on which the blues were gorging. In fact our sounders indicated broad bands of krill 40 meters thick in the water column.  Many regular blue whales known for over 30 yrs were sighted including Alacran B122 a female, B009 Jagdor-male, B197 Persiedes-female, B082 Crinkle-female, B273 Lucanus-male,B166 Mantis-female, and B244 Symphonie-female, to name but a few of the 20+ blues observed at one time in the immediate area of the krill concentration. B151 Quicksilver a female photo-IDed off Cape Breton Island by NOAA aerial surveys in late July and by us mid August, joined this concentration of blue whales along Gaspe. The most surprising and interesting sighting was that of B105 Invasor, sighted most recently in the Azores in 2014 30 yrs after its first and only 1984 St Lawrence sighting. It was now back in the St Lawrence after 31yrs of not having been sighted there.  Though the cross-matching of NWA and NEA catalogs has not been completed, this is still the only cross-Atlantic blue whale match.  At times one wonders who is tracking whom, because this whale seems to be following us around-they will never cease to surprise. Throughout our study period B105 was sighted regularly over 5 weeks and was one of the last blues observed there in late September off l’Anse a Valleau.  It was biopsied so we will soon learn the sex of this individual. 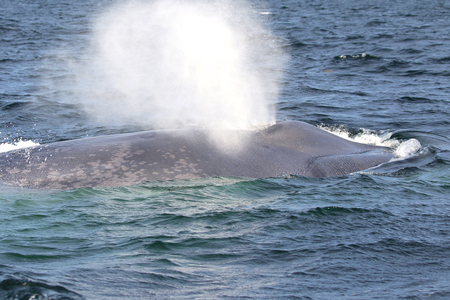 We satellite tagged female B168 off Cloridorme in late August and the tag gave very regular positions in that general area and offshore into the Laurentian Channel for 18 days.  The fact that there was no significant movement away from the area it was tagged in, suggests she found abundant local prey.

Most of our time commuting was spent off Cloridorme or Anse a Valleau, and we never worked off Cap Gaspé or in Gaspé Bay as is more usual.  Them Changes as Buddy Miles wrote.

We arrived on April 23, found good weather and reports of blues whales.  The first week went well with good weather and regular, if few blue whales. The second week was even better weather wise, but the numbers of blues were not as we had grown used to over the last few years.  Still we were able to photo-ID 11 different blues of which 3 were whales already sighted in the Azores in previous years.  The number of re-sightings for the local portion of the catalog remains at around 10%.  This year they probably chose to pass further offshore, beyond our reach, perhaps due to more regular northerly winds, which tend to keep the prey to the South in deeper water.

We did manage to place a satellite tag on the last blue whale we saw within 4-5nm from the southern end of Pico.  The animal had been fluking regularly and very high out of the water and did so even after we had deployed the tag.  Needless to say that at close quarters this added greatly to the intensity of the moment, because the 16-18ft wide fluke towered above the boat briefly before slicing through the surface as the whale dived. The whale of course went in the direction we least expected and traveled nearly 100nm south then East to an area offshore of Sao Miguel and returned a day later to the waters south of Pico, but still far offshore.  Another whale tagged at the same time by the University team at Faial traveled northward.

The 3rd week of our stay was marred by bad weather, however, even when we could get out no blues were sighted.  Such are the vicissitudes of nature on year to the next or even one week to the next. Blue whales were as present in June as in May or April in 2016 and the last blue whale sighted passing by the Azores was during the first week in July.  The migration of blue whales North past the Azores was was strung out from late April to early July, though most of the 31 IDed were sighted from late April to the first week in June.  Five of the 31 photo-IDed had previously been sighted off the Azores in spring.  In the meantime the matching goes on for the Azores and to new ID images being sent to us by collaborators working near Spitsbergen.  What we learn about the NEA blue whales changes almost weekly and so more news to follow.