There are many humpbacks for which we have long sighting histories, and the whale presented here helps to illustrate how several collaborators using photo-Id and contributing to a central photo catalog, can contribute a great deal to our knowledge of a species. Through matching and exchange of data, collaborators can learn about their movements and habitat use over time. In fact this is the essence of long-term studies and is vitally important to understanding population trends over several decades. Long-term data sets are built up gradually over time and these layers enrich our understanding of a species' varied natural history.

The above male humpback whale's North Atlantic catalog code is NA0458, while in our MICS database it is H240 known under the name SST. It was first seen in 1985 on Stellwagen Bank in the Gulf of Maine by the Cetacean Research Unit and was named Halley. Two years later he was in the British Virgin Islands, where he was photographed by Rox Corbett. He was not seen again for a few years, but during the dedicated YONAH project, was photographed in the winter of 1992 in Samana Bay, Dominican Republic and in the St Lawrence the summers of 1992 and 1993. MICS photographed him in the St. Lawrence again in 1994 and 2004, where he is considered a fairly regular visitor, particularly in the northeast Gulf near the Strait of Belle Isle.

So we have a data set spanning nearly 30yrs on well-traveled humpback whale sighted in the Gulf of Maine, Gulf of St Lawrence and in three different areas of the West Indies.

It is always enjoyable and satisfying to see what our pooled long-term efforts can yield in way of valuable data. 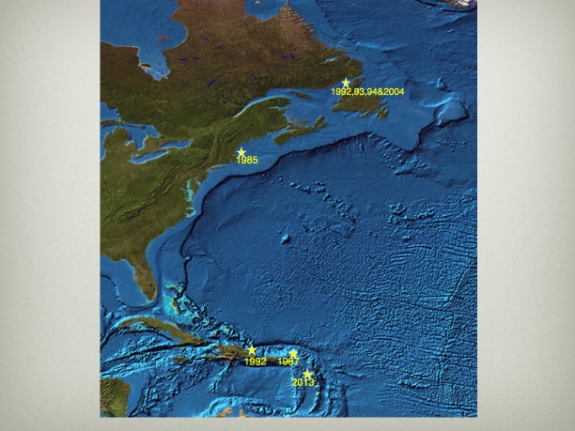