MICS's 2014 field season is slowly gaining momentum. The ice left the northeast St. Lawrence much later this year that in the recent past with the last break-up in the Strait of Belle Isle finally occurring during the first and second weeks of June. In the past month we have had some adequate stretches of good weather to head offshore and get some much anticipated boat time after the long winter! However, while the seas have been smooth and we have been able to cover significant ground with two boats offshore, we have not encountered many signs of life beyond the islands. Good weather seems like a waste when there aren't any whales! 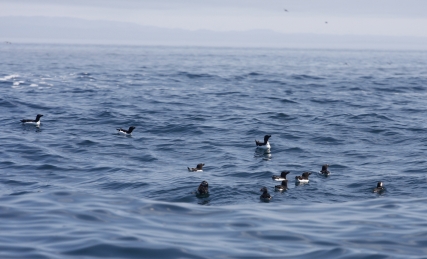 Razorbills and puffins off of PT 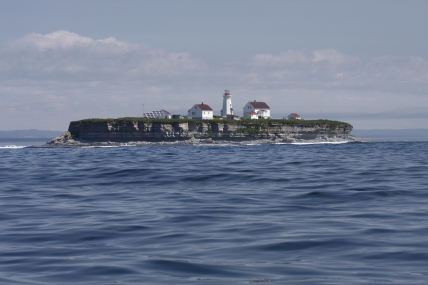 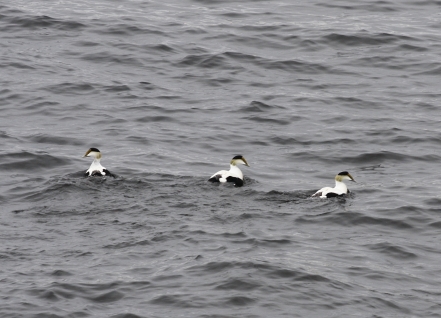 Male Eider ducks
The most interesting visible biological productivity is within the islands and even at the dock in Mingan at the moment! We don't even have to get in the boats to observe some close-up feeding behavior by several minkes that have been targeting the masses of capelin around the harbor which we have seen clearly through the water column for the past few weeks. 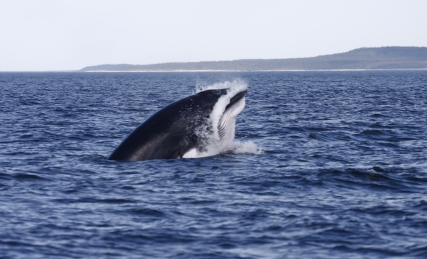 Minke vertical lunge!
The minkes are spread out over our study area, feeding close to shore and around the islands as we usually see in the beginning of the season and since their energetic feeding behavior often makes it easier to predict their surfacings, we have been able to obtain several biopsies already for this species which we have started to direct more research effort and attention to in the recent past. 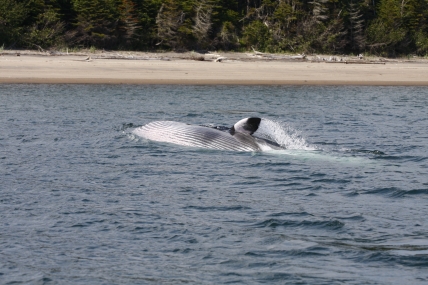 Minke lunge! Look at those ventral pleats!
Over the last month there have also been many groups of 100+ harp seals between the coastline and the islands appearing very, very busy and swimming in a very determined manner on their way farther north. The gannets have only shown up in significant numbers in the past few days along the beach here in Longue-Pointe, plunge diving into huge schools of capelin. 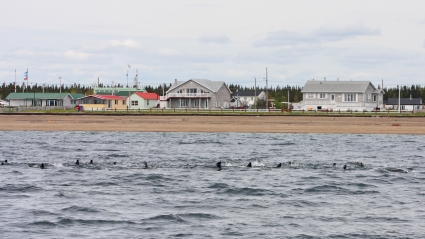 Harp seals just off the beach in Longue-Pointe
We have at least seen one large rorqual in the past month! Milady-F299 is a fin whale known by MICS since 1987 and as in past years, we have found her in shallow waters, west of Ile-aux-Perroquets, most likely feeding on the capelin that is close to shore. The depth gauge read 8m in the first location we found her and since the water was so shallow she didn't need to breath more than two or three times before diving down again. Easy, relaxing foraging for her, but difficult behavior for us to get any photos or for Rene to try to put a tag on her! 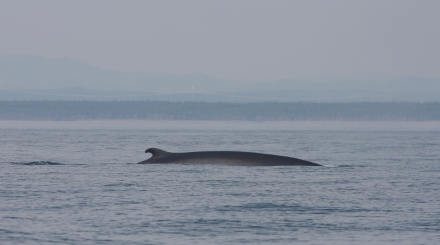 Milady-F299 in ~8m of water
Our collaborators have had a bit more luck with the large rorquals. Department of Fisheries and Oceans (DFO) sighted B017-Scythe, a male blue whale we have known for a long time, off of the Gaspe Peninsula. Rene Roy, who operates out of Matane, sighted several fin whales, minkes, and one humpback-H129-Whip- on July 2.

Now that remnants of the hurricane Arthur have hit the Gulf we wait in the office and watch the swells or the fog patches and catch up on data from past years, waiting for the sun and the whales to arrive!