Sharing the Oceans Can Lead to Entanglements

It's been a slow field season in Gaspé. Just as our collaborators are reporting few whales in the Bay of Fundy and the St. Lawrence estuary, we have had few sightings of any species around the Gaspé Peninsula. Given the few whales, we were excited when, even in wind and rough seas on the 30th of August, we found a lone humpback whale on a bank just off of Gaspé Bay with a dark fluke and two white patches resembling oven mitts. We followed the whale for a while as it dove and surfaced and we noticed a 20 meter thick band of food at the bottom when we checked our echo-sounder. Clearly there was food around, even if there weren't many whales. With the sea conditions worsening, we returned to port for the night.

The following day the wind was strong in the morning but had dropped by afternoon, allowing us a few hours of work on the water. As soon as we left the bay, we spotted our first spout and came across the same whale not far from its location the day before. As we approached however, we all noticed a green rope laying over its back. This whale was entangled. 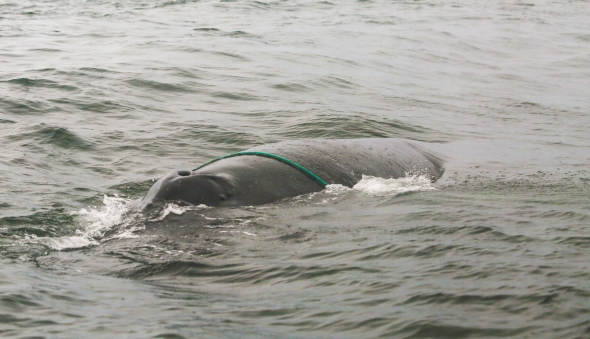 As a member of the Quebec Marine Mammal Emergency Response Network, MICS takes part in responding to marine mammal emergencies. This is dangerous work requiring specialized training, as entangled whales often become stressed and agitated, trying to free themselves with explosive force, tail-lobbing, breaching, and moving with tremendous power. A boat and crew caught unprepared can easily find itself capsized and seriously injured if the whale strikes the boat in its attempts to shed the lines. We called to shore to see if we could find a boat that could bring us our disentanglement equipment and act as a spotter if something went wrong, but it was late in the day and no one was available. Fortunately we had our GoPro camera with us and we put it in the water to try to assess how exactly the line was wrapped around the whale, since we couldn't tell from the surface.

Given how stressful an entanglement can be for a whale, we approached cautiously and slowly, allowing the whale to get used to our boat. It made more sense to approach to a certain distance and then to let the whale come to us in its own time rather than to race over to it to help, potentially scaring it when it was at its most vulnerable. Eventually it did swim over, gently surfacing and spy-hopping next to the boat, allowing us to film the whale up-close underwater with our camera. It's difficult to know what a whale is thinking in such a situation and it's easy to project our own feelings and emotions onto an animal, but we couldn't help thinking that, even if we couldn't free it at that moment, maybe it was at least comforting to the whale to know there was something out there with it in its moment of distress. It was amazing that, even entangled  exhausting itself, struggling to breath, and trying to get rid of the gear  the whale came right over to the boat. A whale in such a situation can't feed, might fight to reach the surface to breathe and could certainly feel the line digging into its body and rubbing the skin raw. We can only imagine how terrifying a similar situation would be for a human.

After watching the whale thrash and spin out of the water in an attempt to get free, but with no way of getting it disentangled safely, we turned back to port as the sun went down, ready to organize the resources we would need to free the whale. Back ashore we viewed the underwater footage and found that the whale was entangled worse than we thought with the ¾-inch line running through the humpback's mouth, trapped behind the baleen right at the farthest point of the mouth and above the eye. When it approached the boat, we saw it try to roll, only to be pulled back by the line that was anchored to something  a crab pot, rocks, or something else in the depths. We pulled our gear together, enlisted the help of the local whale watch company for a spotter boat, and made a plan for the following day.

At 5:30 in the morning we left the dock with one of the conservation staff from Parcs Canada's Forillon National Park and headed to the whale's last position. For over four hours we swept the area in all directions, but found no trace of the whale despite unlimited visibility on this very clear day. The local current system travels offshore over the bank where the whale was last spotted, and we considered that maybe, exhausted, it had been carried that way by the current, but the whale watch companies operating in that area spotted nothing. From shore we drove down the coast, stopping in small towns to scan the water with our spotting scopes, but still found nothing. If the whale was anchored firmly to the bottom it may have drowned, but we remain hopeful that it managed to pull the line through and swam free, leaving the area. This humpback is an animal that has been spotted in the Gaspé region each year since 2009 and we hope that we might just see it again next year if not sometime this season.

Entanglement is a constant threat to whales particularly in coastal areas and, even outside of the fishing season, "ghost gear"  fishing gear that has been abandoned or gone adrift and been lost  continues to fish of its own accord, whether that be for the crabs, lobsters, or fish for which it was designed, or indeed for whales as in the case of this unfortunate animal. A whale foraging near the bottom might not even notice a line if it's hidden in a dense layer of krill or fish until it's too late and its mouth has already closed around the line and the prey. A study conducted by the Center for Coastal Studies in Provincetown, Massachusetts found that roughly half of the humpbacks sighted in the Gulf of Maine exhibited scars consistent with a prior entanglement, and these only represent the number of animals that managed to get free. In this region, snow crab is an important fishery, and fishermen use a "trawl" of traps to catch them. Buoys mark the end of a row of traps underwater and each trap is linked to the next by a long rope underwater called a ground line. Ground line is often made of a floating plastic fiber which keeps the rope from dragging on the bottom and becoming worn. A whale feeding between traps can easily find itself caught in one of these lines, and potentially anchored to the bottom.