Patience and Persistence- The study of Blue Whale dispersal over an ocean basin:

As you know we began collecting blue whale photo-ID data in the St Lawrence in 1979 and have added to the western North Atlantic (WNA) catalog, which now includes 475 individuals, each year since. The research effort has been for the most part quite steady, particularly along the St Lawrence North Shore. From the late 90s on we have increased our effort in the Estuary and along the south shore from Matane to Cape Gaspe. Colleagues have contributed ID images from the Canadian Maritimes and New England waters.

Photo-Id data from the eastern North Atlantic (ENA) was first collected in the mid 90s by MICS in collaboration with Gisli Vikingson of Icelandic Fisheries off western Iceland. In fact the two main sources of blue whale photo-Ids from the ENA are from western Iceland and the Azores. However, the ENA catalog now includes IDs from northwest Africa, Spain, the Canary Islands, Ireland, Jan Mayen, east Greenland and Spitsbergen. Though most surveys have been concentrated in the Azores and Iceland, this effort is much more sporadic and of a much lower temporal value than that for the WNA. And yet the catalog of individually identified blue whales for the ENA is rapidly catching up in numbers to the WNA catalog. Interestingly, we have seen many more calves on the other side of the pond off Iceland and the Azores than in the St Lawrence.
Even with a catalog that will surpass 400 individuals this year in the ENA, we still have very few long-range matches. We have, however, linked NW Africa to Iceland, the Azores to Iceland, and the Azores to Spitsbergen, which shows the broad extent of blue whale distribution and dispersal. And without stable long-term observations sites throughout the North Atlantic will make it quite difficult to better understand population numbers and seasonal distribution.

The effort in the Azores has been centered off Pico and Faial Islands, with additional IDs contributed from Sao Miguel, and many of the Ids have come due to valued collaboration with whale-watching companies operating there. Our main collaborator is Espaço Talassa based in Lajes de Pico. Thank you Serge, Pedro, Rui and Joao and all those who contribute to your efforts at sea there each year.
We have, however, also received significant and steady contributions from Lisa Steiner, DiveAzores, and the University of the Azores-DOP.

Our latest news is that after more than 25yrs of collecting blue whale IDs from the eastern North Atlantic and 35 seasons on this side, we finally have a long-range match between the Azores and St Lawrence. B105 seen once by us in September 1984, right off the Quebec North Shore just West of the Mingan Islands, was observed long enough to take ID photographs of its right side. This blue showed off Pico Island in the Azores on June 17 and 18, 2014, 30yrs later. We now have a complete set of images of the left and right sides, as well as the fluke. Where has it been all this time? It shows how limited our access is to blue whales over an entire ocean basin, and our understanding of blue whale dispersal and distribution. 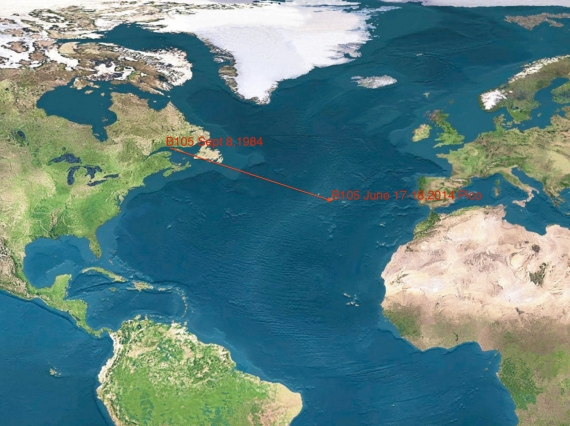 Such cross Atlantic matches are, thus far very rare, yet it prompts us to view the question, as to whether or not the blues from each side of the North Atlantic form discreet populations, a bit differently. Are the two populations largely discreet in migratory patterns to and from feeding areas, with a few outliers who travel between the two sides of the N. Atlantic? Genetic results suggest that there is not much divergence from ENA to WNA. Could the blues from both sides of the Atlantic be sharing a breeding area, which would result in genetic mixing? It interesting to note the two satellite tagged blues that were heading away from the eastern Canadian shelf waters in October/November of 2013. I refer you to our news on blue whale satellite tagging from earlier.

The spring of 2014 was exceptional for the number of rorquals sighted along the southern coast of Pico and Faial and we still do not have a definitive count, however there were near 60 different blues seen. The closest best years were 2006 when 39 blues were photo-identified and 2010 with 33 blue whales photo-identified. There have been many years, however, when just a handful are seen and only 5-10 photo-Ids are collected.

In the St Lawrence of course we have worked with regular effort since 1979 and collected 475 Bm Ids with much more data on individuals.

On the same day we sighted B105 near the Mingan Islands, other well known blues were also seen in the immediate area, including: Backbar, Alexander, Laser, Scythe and Spindle. The only one of these other blues still seen is an old male-B017 Scythe, who has already been seen in 2014. The others have not been seen since the early 1990s, but who knows they may show up as has B105 some tens of years later in another part of the Atlantic. Such long-range sightings, over extended periods of time, of long-lived animals, show the importance of long-term research studies. Without this type of research effort we would have but vague impressions of their lives, which are difficult enough to discern even with extended studies of the type we have here in the St Lawrence.