On September 8 four of us-RS, David Gaspar, Rachel Sullivan-Lord and Alex Borowicz joined the Sedna IV crew to carry out a survey of the southern St Lawrence from the tip of Gaspe to Cabot Strait and out along the Laurentian Channel as far as St Pierre&Miquelon-the French islands just off Nfld's Burin Peninsula. We were principally searching for blue whales, which had not yet appeared in our study area off Cap Gaspe. 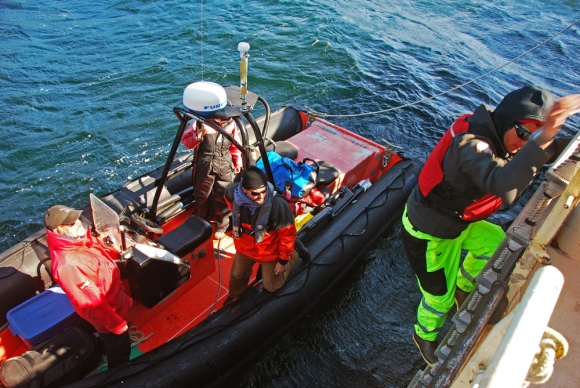 Glacialis Productions
Leaving 15 finback and 2 humpbacks in our wake at the mouth of Gaspe Bay, we headed out to Orphan Bank and then began transects along the western edge of the Lauretian Channel. The offshore bank offered a few Atlantic white-sided dolphins, however, despite good sighting conditions our transect lines did not yield much. At night we drifted near the end of our last survey position waiting for the daylight at 05:30, to pursue our observations. On morning of the September 10 we passed by the eastern side of St Paul Island at the northern end of Cabot Strait, and spotted one finback and several small groups of Atlantic white-sided dolphins. However, weather conditions degraded quickly to poor visibility and strengthening wind to a full SE gale, rendering observation effort useless. We suspended research effort and headed to the Magdalene Island for shelter to wait out the storm and subsequent NW gales. Backtracking was not ideal, but at least we were able to visit these low-slung sandy islands that sit-for the most part-low on the waters of the southern St Lawrence. On the 12th we departed the Magdalene Islands for St Paul Island and Cape Breton once again. Again we found several groups of Atlantic white sides in proximity to St Paul and pursued our track across Cabot Strait to Burgeo Bank off southern Newfoundland. Not much was sighted to during our rotating 2hr watches despite fine conditions. The next morning brought more wind from the south, though not at gale force and we were able to carry out watches for most of the day even though conditions were not ideal- we had no marine mammal sightings.

Life continued aboard ship, as it always does, chipping of rusty paint, replaced by a fresh coat, captain Dany and first mate Guy exchanging watches, Jerome-the boson- seemingly everywhere, kept the deck hands on the move, adjusting a sail, a lashing, making certain the 51m Sedna IV ran as she should in all manner of weather. Below decks the film crew waited for the call of a whale sighting anything that would galvanize them into action to film researchers at work and whale behavior. But no sighting call rang out and they tended their camera or sound equipment. The cook kept his balance in the ship's roll, baked large quantities of wonderful bread and prepared meals for all. The engineer reported what was needed to the captain and on the days went on waltzing to the swell or waves. 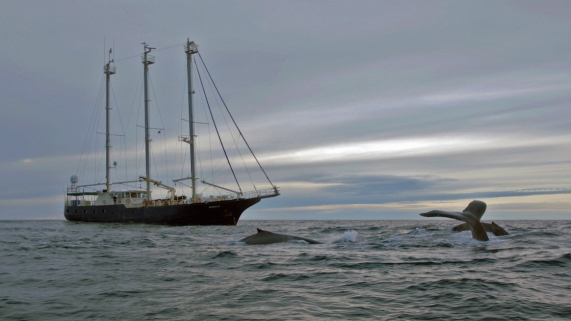 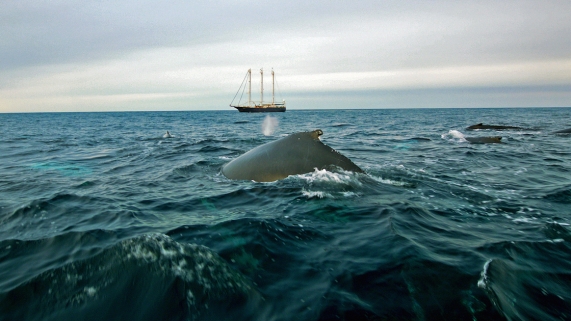 The MICS team made certain that notes and data were properly noted in logs and computer and that any images taken were cataloged and burned on DVDs for storage. We planned and re-planned transects and observation strategies with the captain influenced by the ever changing weather.

The evening of the 12th we anchored in the welcome lee of Miquelon Island in French waters and waited for the wind to abate. The morning of the 13th brought sun and promise of a diminishing wind. We headed to St Pierre and found 5-9 fin whales within 5 miles of shore, but no blues. We had received reports of numerous whales further south offshore, from a local marine mammal observer Joel Detcheverry, who had shared blue whale and humpback observations with us over the previous years. By early afternoon we had found several large groups of humpback whales and estimated 40-50 in the area south of St Pierre within French waters. We spent the day taking Id images of what turned out to be more than 50 humpback whales, though none were whales known to us in the St Lawrence. We spent the 15th with these humpbacks making certain we had good quality IDs of most individuals in the sector and enjoyed calm weather throughout. 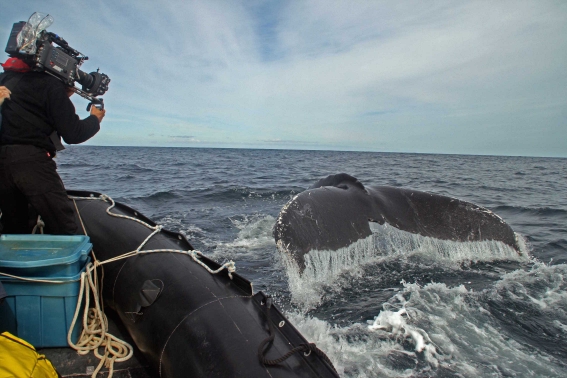 The 16th we lingered in the same area until noon then headed back towards Burgeo Bank and surveyed along southern Newfoundland in good conditions. We sighted a few dolphins, a minke here and there and 3 fin whales off Port aux Basque at the SW end of Newfoundland, as we headed back into the St Lawrence. The 17th we tracked along the Laurentian Channel towards Cape Gaspe and spotted one minke, a finback and several groups of Atlantic white-sided dolphins all heading south. The weather turned from warm to abruptly cold as we approached Gaspe, where we arrived the evening of the 18th facing a wonderful sunset. We disembarked from the Sedna the next morning and returned to our cottage base in Cape aux Os near Forillon Park. The next few days were spent waiting out strong winds and the Sedna stayed anchored in Gaspe Bay. On the 22 we went out in our RIB to look for whales and as the early morning fog dissipated we met up with the Sedna and worked with a group of three humpbacks. We collected biopsies from all 3 including old-timers Fleuret and Splish along the cliffs just outside Gaspe Bay. These whales should appear in one of the film segments presented as part of the series for 1000 Days for the planet produced by Glacialis Productions in the next few months.

That ended our Gaspe and southern St Lawrence surveys for 2014 and I headed home very much surprised that we had not seen one blue whale the whole time and of course not deployed a single satellite tag, but such is nature. RS 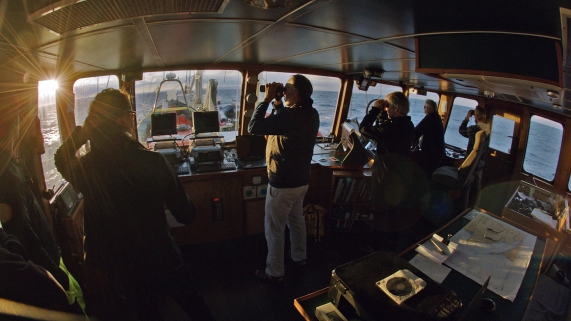 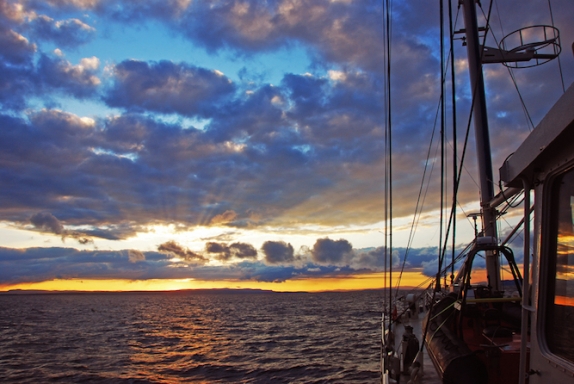