The first humpback whales arrived shortly after mid-July by way of X-Mas (H493) and Ébène (H042), two long-known females, and a first tag was deployed on X-Mas. 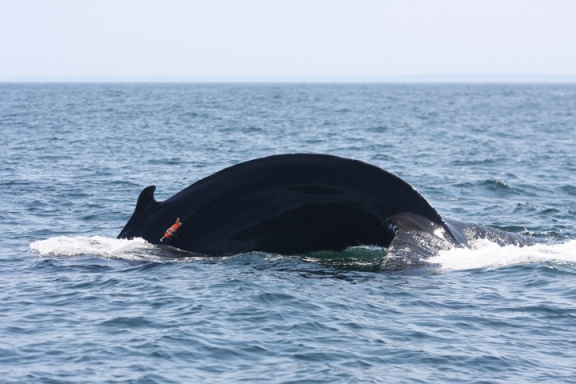 Other fin whales later joined Milady (F299): Perroquet (F045), followed by Topper (F028)  two long-known males  as well as Curly (F002), a big beautiful female known since 1982. These individuals exhibit very high site-fidelity, as we have been seeing them in the same areas of the Jacques Cartier strait over the years along the North Shore, off of Magpie and BBR. A total of a dozen fin whales had been sighted by end of July and beginning of August, as well as a few humpback whales  Tingley (H277) and Darkstar (H140) amongst others. Thousands of harbour porpoises had also been sighted off and around the Mingan Archipelago. The season had finally started

Perroquet F045                                                           Topper F028
August carried on being densely populated by gannets, harbour porpoises and minke whales, which seemed to be moving increasingly offshore throughout the season. After a temporary stay in the St Lawrence estuary, Aramis (H689) was spotted in the company of X-Mas in the waters of the Mingan Archipelago, a rather rare occurrence for adult humpback whales. Tingley and Darkstar were also present in the area. At the same time, Splish (H002) and Quill (H168) were spotted in Gaspe by our collaborator René Roy, followed by Calypso (H573) and a calf a few days later. 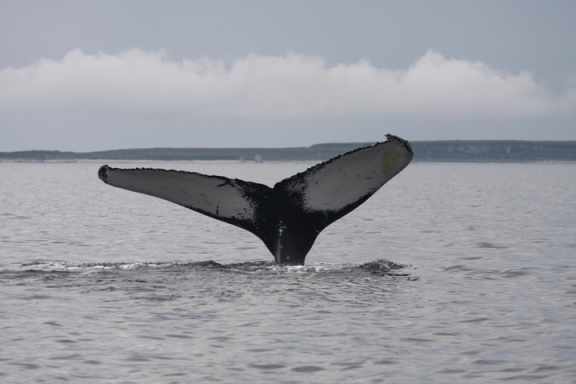 Tingley H277, off Ile Nue, Mingan Archipelago
Still in August, we witnessed the return of an old-timer who had deserted the Mingan-Anticosti area since 2010: Siam (H007). Other humpback whales slowly started to make an appearance, such as Tic-Tac-Toe (H509), Irisept (H492) and H753, later named 'Bad Chemistry' (the origin of this name can be found on our Facebook post here: http://bit.ly/1zi2sWB) . Just as it was the case in the 80s, the animals spent a large amount of time along the North Shore this season, while sightings along Anticosti were rare, even for harbour porpoises. Barbillon (H405) was seen in the company of his grandmother Pseudo (H008), but we were still without news from Fleuret (H009), respectively their mother and daughter. Several fin whales were still present in the area around Magpie and BBR, of which Perroquet, Stratum (F102) and Curly. 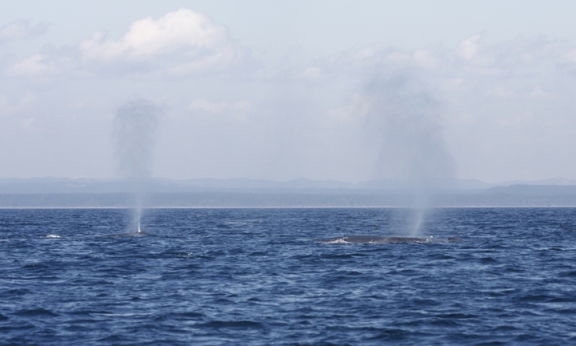 Fin Whales off Riviere-au-Tonnerre
Trauma (B349), a male blue whale, joined the other species in the same area he was sighted back in 2012. He unfortunately was the only blue whale we saw in Mingan this year. He was also later sighted in the middle of the Strait, south of Havre-Saint-Pierre. 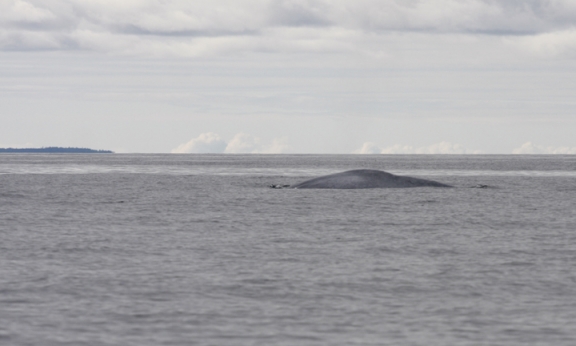 Trauma B349, recognizable by the depression on its back

August in Mingan ended with the massive arrival of Atlantic white-sided dolphins by the hundreds, including many young individuals and calves, and more and more whales, topped with the wonderful cherry on the cake that was the regular appearance of northern lights. These dolphins were the reason that Nikki Vollmer, a postdoctoral fellow from the National Oceanographic and Atmospheric Administration (NOAA) and the Smithsonian Institution, joined our team in order to study the population genetics of this species (http://www.rorqual.com/news.php?art=220&archive=0&lang=en).
In the meantime, on the other side of the Gulf, on the South Shore in Gaspe, another research season was starting: the blue whale satellite-tagging project.

Atlantic White-sided Dolphins
Lagenorhynchus acutus
In early September, the number of humpback whales slightly increased. Spines (H151) was present, as was BBR (H626)  who had not been seen in Mingan since he was a calf back in 2005  X-Mas, Aramis, Barbillon, Tingley, and a new, small individual, who had been spotted earlier this summer in the Estuary alongside Aramis.
Regarding the fin whales, their numbers increased much quicker, including males such as Stratum, F371, F348, F037, F320 and F150; females such as F181, F253, F491 and F344; as well as many more individuals who have not yet been biopsied, such as F540, F336, F189 and F241, to name but a few.
A great surprise came in the form of a right whale on September 1st. It is a very rare, and very exciting sighting for us, seeing as it is one of the most endangered species of cetaceans. Our pictures were immediately sent to Moira Brown from the New England Aquarium, who identified the individual as #1162, a male who has been known since the 80s. This is the first time this individual has been sighted in the Gulf of St Lawrence. He was resighted in the same area  south of Havre-Saint-Pierre  on the 5th and 7th of September. Welcome to our waters dear friend, and may you stay as long as you wish! 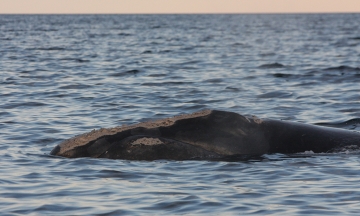 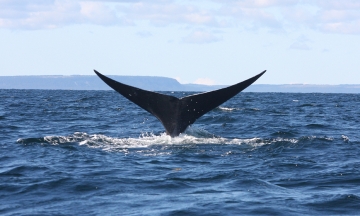 Northern Right Whale
Eubalaena glacialis
The most beautiful day of the season occurred on September 13th, with over 40 fin whales, 12 humpback whales, and over a thousand dolphins. Unfortunately for us, the days were slowly getting shorter and colder, meaning we no longer had many opportunities left to go out to sea. 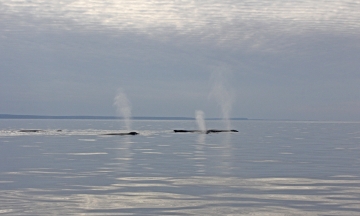 After that splendid day, bad weather came along, bringing rain, fog, and even sunny days that were riddled with strong winds. Patience is a virtue One of our colleagues, Katy Gavrilchuk, embarked aboard the Roter Sand sailboat in Rimouski for the Nomades des Océans Symposium, a 10-day expedition in the Estuary and Gulf of St. Lawrence, from the 9th till 20th, including 5 stops along the Gulf and the Estuary (http://www.m-expertisemarine.com/projets/symposium-nomade-des-oceans/). The project brought together 18 participants, among whom specialist St-Lawrence cetaceans researchers, representatives from various marine mammal conservation NGOs, and marine ecology students. Among them, Sonia Giroux from the Réseau d'observation de mammifères marins (ROMM), Lyne Morissette from M - Expertise Marine, Josiane Cabana from the Quebec Marine Mammal Emergency Network, and our Katy.

Our Gaspe team (Richard, David, Rachel and Alex) embarked aboard the Sedna IV on September 8th in order to perform transects along the southern edge of the Laurentian channel. A few minke whales, one humpback whale and some Atlantic white-sided dolphins were sighted, but no signs of what was their main focus: blue whales.
Finally, the weather allowed us a last day out at sea on September 26th. We noticed that there were still many animals present in the strait. Around twenty fin whales, ten humpback whales, many porpoises and minke whales, but no dolphins.

Among the humpbacks, we saw Whip, Tingley, Spines, Aramis, X-Mas, Barbillon, Leprechaun (H379) and St. Laurent (H152). The latter had just been sighted off the coast of Gaspe.
We also had the pleasure of having the Sedna IV and Jean Lemire's team visit Mingan. Our own team members were extremely thrilled to get a tour of this magnificent boat. It was a great way to end our 36th season.
While we were preparing the station and the boats to be stowed away for the winter, we had a beautiful, windless week. How cruel, don't you think?
In any case we wish to thank all of our collaborators and partners, everyone who has been sending us pictures of humpback, fin, and blue whales, and to our visitors who came to meet us at the museum and joined us out to sea.
A great big THANK YOU to our team members, volunteers and sessions, without whom none of this would be possible.
See you next season 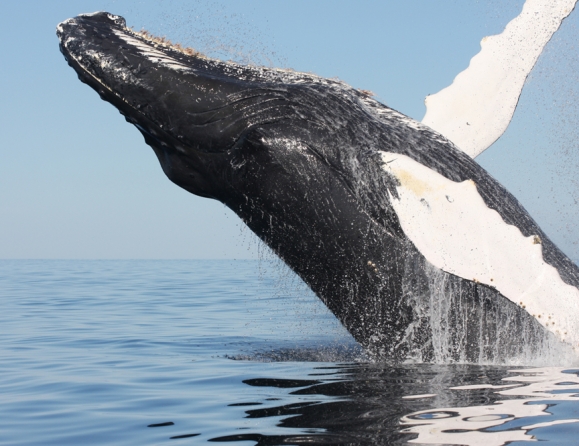