August 30th the day started off with promises both from the marine weather office and the sea, and we were inclined to believe the calm conditions would remain as predicted. However, we soon learned that the weatherman had missed by a long shot once again. We left the house in Gaspé early in the morning and drove to the harbor at Cap-des-Rosiers, on the north side at the tip of the Gaspé Peninsula, where our boat, Squall, is kept. This harbor is only a short 10K drive from our house overlooking Gaspé Bay. From this position we have quick access to either side of the peninsula, depending on weather and whale distribution. We are located where the Appalachian Mountains literally drop off into the ocean. Both the landscape and the bathymetry of this region is dramatic, driving tourism productivity on land and whale-food productivity in the sea.

Out of Cap-des-Rosiers harbor we headed north and encountered a few minkes and grey seals, which we commonly see here from our scoping spot up on nearby Cap Bon Ami. Upon reaching the 100m contour, we turned east towards Banc des Americans. We stopped to have lunch and listen, and saw nothing but a small (4-5ft) shark traveling along just below the surface. This bank is oceanographically interesting because of the sudden rise in depth, which encourages productivity caused by wind-driven and tidal current upwellings. Mixing of the water column over and around the bank creates a dynamic and productive environment. The rich plankton soup formed attracts fish, seals, whales and birds. Historically Banc des Americans has been a much sought-after fishing area, particularly for cod.

After looking and listening at Banc des Americans we continued on to Ile Bonaventure. This island is a large migratory bird refuge and home to the largest northern gannet colony in the world. Around 120,000 gannets nest here, in addition to thousands of other seabirds such as razorbills, kittiwakes, common murres, cormorants and puffins. 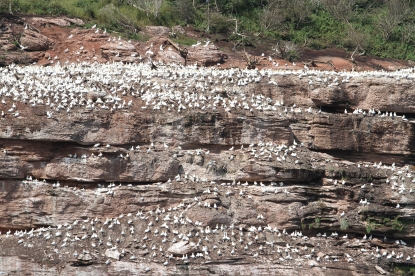 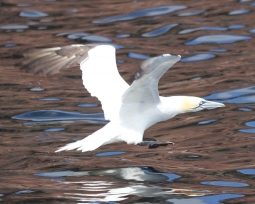 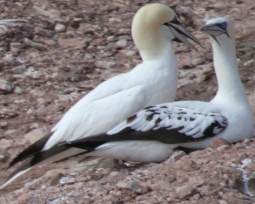 The island and seabird colony is accessible by land, but our view from the boat was especially impressive as thousands of birds flew overhead, back and forth from feeding grounds to the island, occasionally making an unwanted deposit into our boat. A gang of grey seals was also present, following us along the base of the cliffs and eyeing us from the water as we snacked. 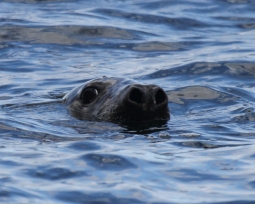 (MICS Photo) "Is that the bacon kind?"

After bird watching at Bonave 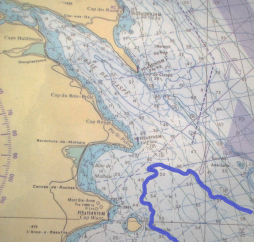 nture we noticed a whale-watch boat go by and head offshore. We stopped and scoped just north of Bonaventure Island, and as the wind finally died down we saw a tall spout a few miles offshore and headed towards the whale. It was a blue whale, very calm and swimming slowly, not showing much of its body until it dove. We took photo ID shots of its left side and Richard immediately recognized this individual as B161, a male who has been sighted in this general area before. B161 was first sighted in 1981 near Mingan and has been seen 19 other years since then, off Mingan, in the estuary and around Gaspé. The last year this whale was sighted was 2008, just southeast of Bonaventure Island.

This time, we were able to follow him for several surfacings and it appeared that he was feeding along a 50m contour (highlighted in dark blue on the chart below). The northwest wind and the swells picked up quickly, however, and the opportunity to try to obtain more ID photos or place a satellite tag vanished in the onrushing swells and sea foam. Things only got nastier with the northwest wind slamming Squall and I heard Richard mutter something about "norte".

We headed north again, and saw another blue whale off Ile Plate, but the sea conditions were too nasty to follow it offshore. After battling the waves for a while on our way back to Cap des Rosiers, we decided to duck into Gaspé Bay instead and head to the harbor at Grand Grave. Protected from the wind as traveled along the North side of the Bay, it was smooth sailing to the harbor. On our way Richard spotted a small black bear on a beach below a cliff walk that tourists were hiking on. We stopped and watched him from the water as he scrambled up the hill into some brush no doubt stocked with berries for a snack.

Fingers crossed for more whales and the weatherman to be right about calm weather in a few days! 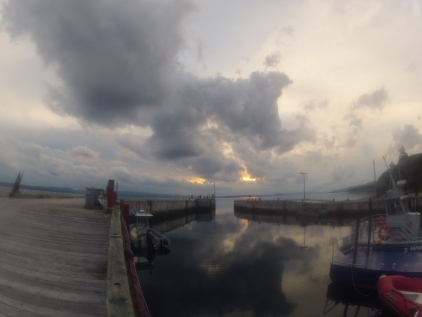