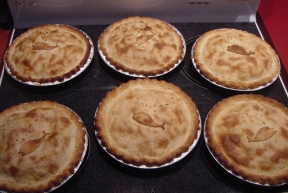 In a cloud of flour, Sue Smith, singer-songwriter, and longtime friend and supporter of MICS from Guelph, Ontario, can bake 20-30 delicious apple pies in support of blue whale research in rapid rhythmic time. An avid blue whale observer, Sue has on several occasions, in recent years used her culinary skills to raise funds for blue whale research. Sue bakes one of the finest apple pies one can taste and she has found moments in her busy music teaching schedule, to bake numerous pies, that have barely had the time to cool in her kitchen before being whisked away to a friend's dinning room table. The pies have met with so much success that Sue has raised considerable funds for our research operations and endowment fund.

Her hands may expertly write musical notation and dance along a piano keyboard, but they also create delicious apple pies that are as pleasing to taste as her music is to the ears. Both are valuable to our well-being and little do blue whales realize, that golden brown disks of pure delight help in discovering more about their lives.

The whales, but mostly those of us studying them, thank you and those who donated to our work by purchasing your pies. Please keep making these delights, because they taste so good. 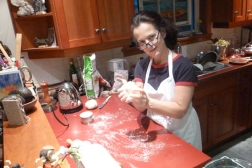 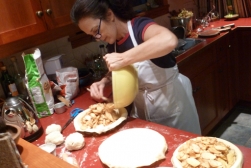 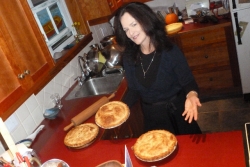