News from the 2012 blue whale satellite tagging expedition in Gaspé! Most of the exciting work so far has been accomplished on land, as we wait patiently (or try to) for good weather to get out on the water. There have been strong winds and considerable swell just offshore ever since we arrived late last week (around August 23rd). However, yesterday (August 28th) we had reports of two blue whales sighted farther to the southeast so at least we know animals are in the area and hopefully the weather will clear up soon! We are occupied with good food (including a singular apple pie) and by matching various blue whale photographs to the MICS catalog here at our land base in Gaspé.

Today (August 29th) Richard received photographs of a mother and calf blue whale pair sighted by Mike James of DFO, working with the Canadian Sea Turtle Network (CSTN) was tagging leatherback turtles off of Cape Breton, Nova Scotia. The pair (yellow dot marked as 2012) was sighted off the northeast tip of Nova Scotia, along the western boundary of the Laurentian Channel, and in the scale of blue whale movements, not too far from where we are now in Gaspe. The CSTN researchers drifted alongside the whales for 10 minutes and were able to obtain identification photographs for both the mother and the calf.

This calf is only the 22nd blue whale calf ever sighted in the Gulf of St. Lawrence in 34 years! While adult blue whales have been regularly sighted in the gulf since MICS started blue whale research here in the late 1970's, calves have always been an extremely rare sighting in this region. No one is certain why more are not seen here. 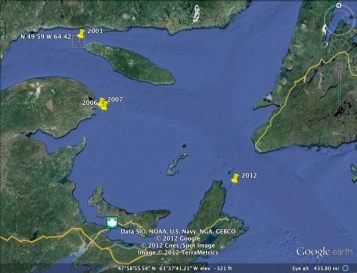 Richard was able to match the mother to the Northwest Atlantic blue whale catalog and identified her as B373! This whale was first sighted in 2001 off the northwest tip of Anticosti Island, within MICS's normal range of summer fieldwork, and had also been previously sighted in 2006 and 2007, both times within the Gulf of St. Lawrence, and twice very close to Gaspé. The sex of this individual had been previously unknown, since she had not been biopsied. The presence of the calf, besides being important in itself, identifies this whale as a female. 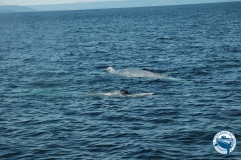 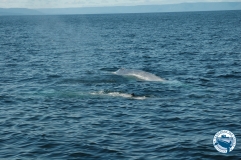