St Lawrence Calf Blues-Where have you been all these years?

In August of 2002 Christian and myself were carrying out our annual blue whale survey in the estuary where we had been infirmed that amongst the blue whales present was the unique-looking female Chameau accompanied by a calf.  After a few days on the water we found her and calf near les Escoumins. The calf was quite small for this late in the season and in fact reminded us of the size of much younger blue whale calves we often see in the Sea of Cortez in March. This calf was in good physical shape, quite playful, engaging in speed swimming and at times more than kilometer from its mother. Working until sunset, we were able to capture, with some difficulty a few ID images of the calf on August 23. Little did we realize that these August 23rd sightings would the last for a long time. We seemed to have witnessed the moment the calf was weaned from its mother, because over the next month Chameau was seen regularly without the calf.  We even worried that the young whale might have come to a bad end, perhaps struck by a ship.

Fast forward to 2011, one of the worst years for blue whale sightings in the St Lawrence to date, with only one or two blues seen at a time off the eastern end of Gaspé. Four have been seen in the Mingan study area and as many as five seen at one time in the Estuary. By late August the Gaspé region is usually one of the best places to see blue whales in the St Lawrence, but this has been the summer of the blue fin tuna not the blue whale. That is, however, a story for another time. On August 18, 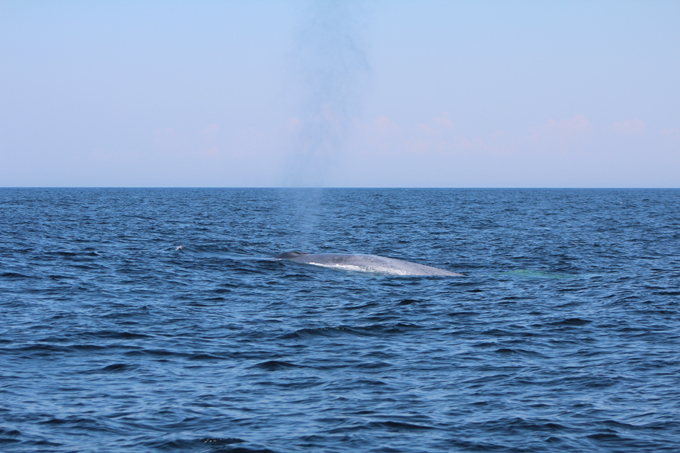 while aboard a whale-watch boat off the eastern tip of Gaspé Mr. Gilbert Grondin enjoyed the sighting of a blue whale and luckily, for our purposes, was able to take several pictures of a pale blue whale, 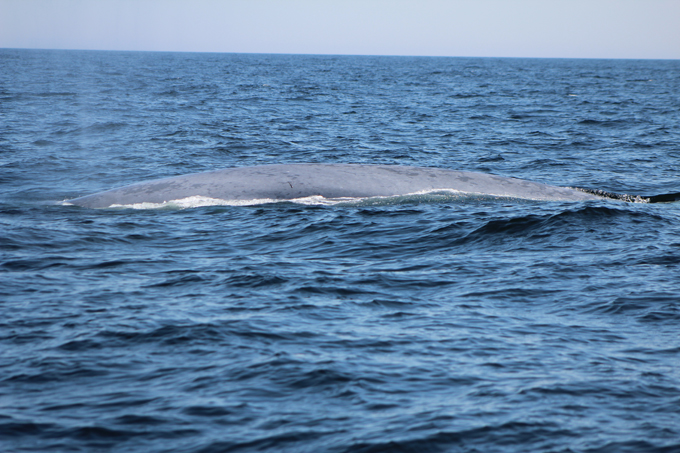 which turned out to be Chameau's calf first and last seen in August of 2002.  Now 9yrs old, what has this whale been up to all these years?  Has it been back to the St. Lawrence before and just not been seen by researcher or whale-watcher.  Where has it traveled? Hopefully we will learn more about this whale in the years to come.

Even though we have known Chameau since 1991,we have not sighted her every year, and she may or may not have had other calves. Only 20 blue whale calves have been confirmed in the St. Lawrence since 1979 and this is the first of those very few that we have seen return.

We would like to thank Mr. Grondin for generously sharing his images of this whale.  If anyone else has images of blue whales that may help us add data of this nature we encourage you to send them to us with date and position if possible.