Our 33 season has started well with some wonderful outings that included encounters with fin whales, humpback whales, minke whales, a few different seals and various seabirds. We arrived in Longue-Pointe-de-Mingan (near the 50th parallel) at the beginning of June where the nights were chilly and small patches of snow still remained in the surrounding forest.

Part of the fleet

The station and boats were prepared quickly because motivated team members were anxious to being exploring for animals both near the shore and outside the archipelago. It was a calm first week and we only observed a few seals, some dispersed seabirds, and a few minke whales near the beaches. Small groups of harp seals were observed heading east, likely as part of their summer migration out of the St. Lawrence toward higher latitudes.

Then everything started changing when capelin began rolling (a Quebec word for spawning) on the beaches.  We started observing increased numbers of northern gannets, gray seals and minke whales, although they were further offshore compared to previous years.  We also began to see some harbour porpoises outside the islands.  A few sunny days, interspersed with bad weather days, allowed us to patrol the western part of our research area all the way to Banc Parent. And then finally aSPOUT! The first spouts were seen, as the elegant fin whales had returned once again to the area.  This time they were in the St. Jean River area, with a few whales near shore and others further offshore. The team was particularly happy when some of the fin whales approached near the station inside of Perroquet Island. Milady (F299), a female fin whale that we have known for a few years, was even observed lunge-feeding on capelin in only 7.5m of water! 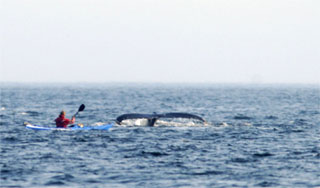 On June 14th we observed two feeding humpback whales near the beach just in front of the station! With little time to spare, Sirocco and crew got to the whales to take pictures and biopsy samples, while David observed them in a kayak. We observed the same two whales for a few days in this area but also continued to encounter fin whales between Longue-Pointe-de-Mingan and the St. Jean River.

Dr. Brian Kot from Texas A&M University has returned to continue his experimental research project in these same shallow water areas. With assistance from fishermen friends aboard the Dandy Jim and Lady Elise, he deployed cumbersome oceanographic monitoring equipment and then began his daily experiments to test for behavioral responses of minke whales to experimental fishing gear (see below for more details of his project). 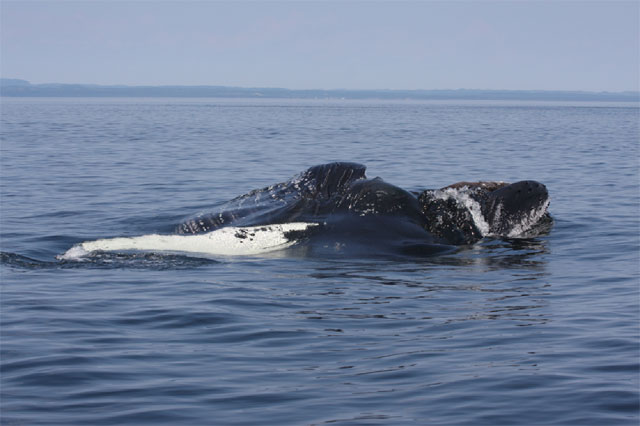 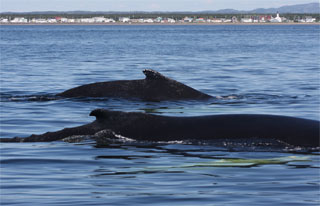 Our trips offshore are now slowly adding up and the museum has welcomed its first visitors of the season. During some of these very first trips our visitors have seen remarkable displays of behavior from lunge-feeding minke and humpback whales.  One humpback (Graffiti  H640) repeatedly broke the surface near the boat with its enormous mouth wide-open!

The last day out on June 23rd was a great success, especially for the visitors because they didn't have to wait long to see whales. Grafitti and the 2010 Calf (H775) of Koudou was just offshore of Longue-Pointe, a group of four fin whales (including F299) was near the St. Jean River, and seven other fin whale were close to "Lady Bug along Anticosti Island. As a special treat for the day, a curious minke whale approached and spyhopped multiple times next to the boat. What an amazing experience it is to peer into the eye of a living whale! 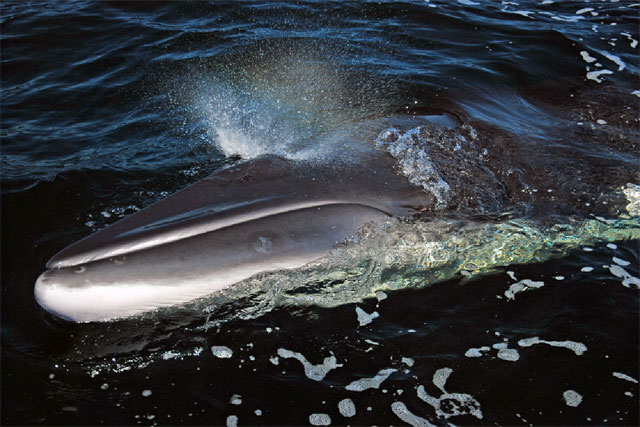 The weather has now become unfavorable, dampening the mood for the St. Jean Baptiste bonfire and leaving us landlocked once again. However, bad weather has allowed us to advance certain projects including renovations to our dark room.  For the MICS alumni, the dark room is no more.  In the near future it will become a wonderful new working lab for students and scientists