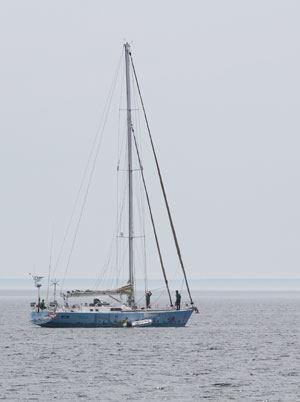 When we arrived at the dock after a pleasant day on the water July 14th, we were delighted to meet the Pakea Bizkaia Basque sailing team. We immediately recognized the marine paintings which decorate the hull of the 20m Challenger 67 sailing boat. After a sporty career travelling over 80,000 miles, Pakea Bizkaia has embarked on a socio-educational program.

The goal is to acquire educational material during each of their expeditions. The first expedition under their new program was in 2010 to North Cape (Norway) which included visits to over 10 countries.
This year for their second expedition, the Basque team have decided to retrace they ancestor’s voyage across the Atlantic. They left Bilbao (Basque Country), arrived in Greenland after 2 weeks, went through the Strait of Belle Isle and finally moored at the harbour in Mingan. Between Anticosti Island and the Mingan Archipelago, the crew observed minke, fin and humpback whales. They did not observe any basking sharks, however. We visited their sailboat and learned more about the Pakea Bizkaia educational projects such as promoting environmental stewardship, encouraging education based on values, popularizing the practice of sailing, and integrating it as part of their history. They also wish to use sailing as a didactic tool, to develop relations with other cultures, and finally, to open the world to Bizkaia and open Bizkaia to the world! To manage this, the crew plans to meet organizations across the world having objectives similar to their own.
The morning following their arrival in Mingan they filmed some educational videos in the interpretation centre at our station.

Pakea Bizkaia has continued her journey to Quebec City and will visit us again before heading to Newfoundland and crossing the Atlantic once more. To learn more about Pakea Bizkaia visit: www.pakeabizkaia.com.