Monday August 1st, even though the weather forecast predicted a short day at sea, we still offered tourists to come out with us. Rafale and Mistral left the dock at around 7:30am and went between  Grande-Île and les Îles à Bouleaux. While crossing in between the islands, we encountered a thick fog. Mistral’s crew lost sight of Rafale, who was only a few hundred meters away from them. The breeze was rather warm, and the sea already had a swell and waves. We decided to head towards the North Point of Anticosti to search for animals. On the way, only a few harbour porpoises were sighted, even though they were difficult to spot due to the sea state. Usually this time of the year we see many porpoises.

We arrived in the zone where fin whales were seen recently but no spouts were seen. Waves and wind, but little to no sign of underwater marine life. However, sea birds were present in the area : Gannets, Arctic sterns and a few puffins. Then, all of the sudden, we sighted a spout in the distance. Mistral headed in this direction. A whale with spotted pigmentation A BLUE WHALE!

We were all amazed and really excited. Everyone on board was appreciating the opportunity we just had.

The Station was first established in Longue-Pointe-de-Mingan, among others, because blue whales were highly abundant in the survey area in the 70’s. However, in the early 90’s, blue whales became significantly less present in the area, nearly absent. Blue whales feed on tiny crustaceans (krill) but due to their large size they need to feed on large quantities (up to 4 tons a day). Fewer observations of blue whales in Mingan in recent years could be indirectly linked to the collapse of cod stocks in the early 90’s. Krill is also consumed by small fish such as capelin, sand lance and smelt. Cod then eats these fish species. With the decrease in cod stocks, smaller fish species may have been released from cod predation and consequently experienced a growth in their abundance and distribution. This trophic shift could have induced higher predation pressure on krill. Blue whales may have disappeared from Mingan because krill densities were not sufficient enough to satisfy their hunger (Comtois, 2010). However, blue whales are often observed in the Estuary or off Gaspé. Prior to our blue whale observation this year, the two latest blue whale observations in the Mingan area were in 2006 and 2010 (Mercure, B061).

The blue whale observed this year was identified as Zaffre (B101). This female was observed for the first time in the area close to Sept-Îles in 1984.  She was then seen almost every year in the Estuary or in Gaspé. It was the first time she was sighted in the Mingan area. Perhaps she managed to find a patch of food near Anticosti.

Both boats had time to observe Zaffre as she surfaced and we were able to take the photo-identification pictures needed. We then continued our survey heading west and found H731, a female humpback whale first identified in 2008 and seen often this season. 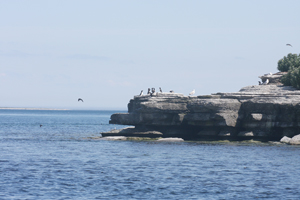 Due to unfavorable weather conditions and an increasing wind, we had to head back to Mingan sooner than hoped. We came back, passing close to Île aux Perroquets where we found sun, calm sea and lots of puffins and other sea birds.

What a day: start off in thick fog, swell and waves and encounter a unexpected giant