Brax was not the most gregarious of humpback whales, however, when with whales in the waters off Mingan and Anticosti she chose the company of two other well-known female humpbacks, Ebene and Tingley. 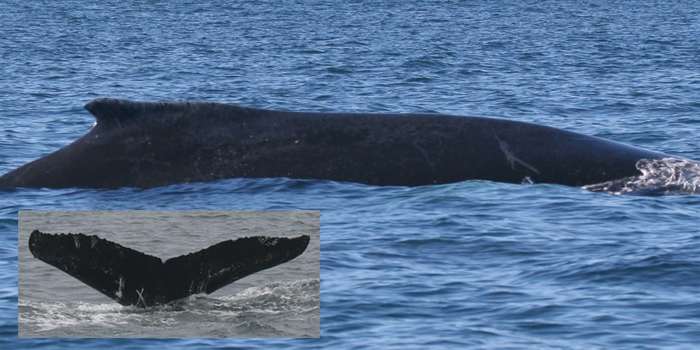 Named for the X (Brand X to a less bland and more personal BRAX) and other scars left by killer whales on her flukes, Brax had also acquired some additional scarring on her tail stock due to partial entangled in fishing gear She survived, however, to spend many summers in our study area along western Anticosti Island.

Brax was first seen in 1982 and was the most regularly sighted whale in the Mingan/Anticosti region, observed in 24 years out of the 29 we knew her.  She was noticeably small for a mature female and in fact we did not know Brax was a female until she was first biopsied in 1992. Brax appeared to be particularly fixed on the Mingan region in the St Lawrence, because she was never seen anywhere else, not even Gaspe, Blanc Sablon, the Estuary or even Sept-Iles, though she most likely did at least pass by Gaspe in her travels, even if far from shore.

Brax was first observed with a calf in 1998, and she subsequently had calves in 2001, 2004, 2007, and 2010  at very regular 3-year intervals. It is surprising, that she was not seen with a calf prior to 1998, despite the fact she was at least 17 year old when she returned to Mingan with her first calf. Because, she has an almost uninterrupted sighting history, it is unlikely that we missed many calves.

She was seen in 1989 in Samana Bay (Domincan Republic) (CCS) part of the main Caribbean humpback breeding area, so was probably reproductively active by then. She may have had calves that did not survive the long migration to the feeding grounds.  Perhaps her small size was a factor, because larger females usually give birth to larger calves, which appear to have a higher degree of survival.

We are fairly certain that she lost her 2001 calf, because we saw her with calf at the beginning of the season, but strikingly from August on the calf had vanished. It seems too early for weaning because humpback calves will stay with their mother late into the fall.  We have never, in fact seen any of her calves in subsequent years, though that probably does not mean much since dispersal is more common in young whales.

Because this whale had been known since the very first years of MICS’ existence her death leaves perhaps more of a trace and all the more so since she appears to have been a relatively young animal. Will we ever know the reason for her demise and subsequent beaching on Anticosti Island? Probably not, but at least Brax passed in an area she knew well and where she enjoyed many summers in an area rich in food, in the vicinity of a growing humpback whale population and accompanied on occasion by one of our research inflatables.