Today we left the dock in the fog, again. As we approached Grand-Ile, the scenery was ghostly- only the tips of the trees could be distinguished in the thick white fog. Scirroco led the way, followed by Mistral and Twister in a triangle formation. Keeping visual contact in the fog is the safest way to go. As we exited the islands, the visibility ameliorated. After several days of rain and wind, we decided to return to the same sector we had originally found the whales...hoping they had not moved very far.

Three boats went out on this exceptionally flat calm day: Twister was attempting to places VHF tags on minke whales offshore, Scirocco's plan was to get biopsies and photo-identification data, and Mistral had 7 tourists participating in a day on the water with MICS biologists.

We found fin whales in the same sector we had been a few days prior. They were quite dispersed and not taking many breaths at the surface, so it was difficult to estimate the total number of fin whales in the area, but approximately 15-20. The sea state was so calm you could see a perfect reflection of the clouds and they birds as they flew overhead. Despite the optimal working conditions, the whales were not exactly easy to approach. Most of the time, their dive times were random, and surfacing patterns unpredictable. We were always too late to get to the animal before it decided to dive into the depths. Then it was a guessing game to see where it would surface next. Sometimes pairs and trios would remain together for a couple surfacings, and then split up underwater and resurface quite far from eachother. These whales were an excellent test of patience. We did not complain however- the waters were rich with life. Harbour porpoises are becoming quite abundant, as well as minkes and harp and grey seals. The patchiness of food resources in the ocean is truly impressive. This is most evident when we pass through zones brimming with many species, to zones that seem completely lifeless.

Today we also had the pleasure to encounter a few basking sharks. Usually they can be spotted by their characteristically large, triangular dorsal fin sticking out of the water. They swim slowly at the surface filtering water and consuming tiny plankton. It seems ironic that a shark this massive is so serene and gentle. 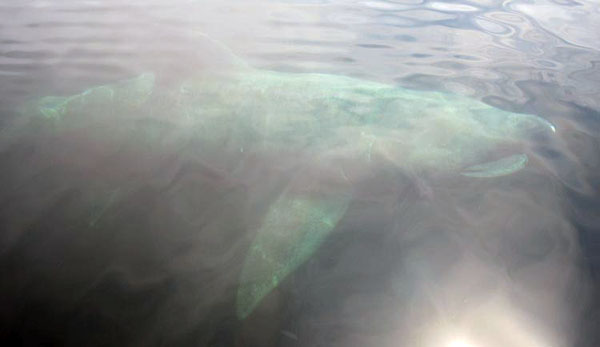 We also had an unexpected and unpleasant event today. At 12:30pm we received a radio call from a non-MICS boat in the same area notifying us of dead whale floating approximately 3 miles from Anticosti Island. Two of our three boats went to find the whale to investigate. We found it floating on its back with its ventral pouch distended. It was a young female fin whale, possible a calf from this year (~ 12m in length). It was still relatively fresh, the skin was not yet decomposed. Our first impression on the cause of death was a fishing entanglement. However, there were no visible fishing gear (ropes or buoys) around the whale. There were shallow lacerations on the ventral pouch and deep lacerations on the peduncle. These could have been caused by ropes. We took skin, blubber and muscle samples as well as several photos. This may have been one of the calves we had already sighted this year. We will keep an eye on the fin whales we had identified as mothers this year to see if one of them no longer has a calf.

Unfortunately, Twister was unsuccessful in tagging any offshore minkes...but they get closer and closer every day. It is certainly a difficult skill to master. Ironically, the other boats out that day did encounter a couple of curious minkes. In the picture below, if you look close enough you can see very small hair follicles on the chin. We suspect these hairs to be important for sensing their environment.

Starting July 15th, 6 team members are leaving for a 2-week offshore project to the Flemish Cap (a few hundred miles East of Newfoundland). Richard Sears is interested in determining if this area is frequented by blue whales. Since the collapse of cod stocks in the early 1990s, populations of small fish (capelin, herring, sandlance) appear to have increased, perhaps a result from the release of predation. An increase in these fish populations likely increases the predation pressure on zooplankton species, such as krill. An increased abundance of these small fish may be attractive to fin, humpback and minke whales, however, blue whales specialize on krill and may be more restricted to zones of high krill densities.

Since the early 90s, blue whale sightings in Mingan have decreased, while sightings of fin, humpback and minke whales have increased. Blue whales are still sighted regularly in the Estuary and Gaspé regions. Regions off the coasts of Newfoundland may also be hot spots for krill aggregations, however there is little research effort in these regions and consequently, we have no knowledge if blue whales feed there. The goal of this 2-week expedition is first and foremost to verify the presence of blue whales. If blue whales are found, the team is well equipped with various equipments to get as much data as they can from the individuals they encounter.

It was time for Dr. Brian Kot (Texas A&M University, USA) to retrieve the 4 hydrophones he had deployed a month ago just off Longue-Pointe-de-Mingan. These hydrophones had been strategically placed near his experimental set-up of cords and buoys in order to determine how minke whales interact with these types of gear (refer to the newsletter of June 20 2010). The deployment of the hydrophones was much simpler than the retrieval. We fished the hydrophones out using grapnels (lines with metal hooks) and patience. Will Brian be able to detect any interesting minke vocalizations around this system of cords and buoys?

The sense of hearing is quite developed in marine mammals and is used for communication, navigation and to detect their prey and predators. Sound travels much faster in water than on land, and can thus travel substantial distances. This is one of the reasons we have to be cautious about the underwater noise generated from our various activities (seismic surveys, underwater construction, etc.).

Through his hydrophone recordings, Brian may be able to detect specific sounds made by minkes in the presence of his experimental rope and buoy set-up.

Today, only one boat went out because we had no tourists. It was a memorable day which merits a few sentences
Fog was hanging in the islands as we left from Mingan harbour on this day. The sea state was so calm that

the reflections on the water surface were like mirror images.

As we made it offshore the fog was too thick to see spouts, so we stopped the boat and cut the engine to listen for whales. At first we heard only harbour porpoises and grey seals breathing at the surface, but then came a deeper and more powerful - a juvenile humpback. We approached it for photo-identification pictures and then waited patiently for its next surfacing to obtain a biopsy. We didn’t recognize this whale. As we waiting, a basking shark conveniently popped up right next to the boat! They’re quite archaic lookingbut none the less impressive.

Later on, we found several fin whales, including two cow-calf pairs. One of the cow-calf pairs was so relaxed with the presence of our boat, that during our approach we could see the cow’s eye and the whole length of the calf underwater. It was breath taking. Pictures would never be able to capture this beautiful moment. The profoundness of these types of encounters can only be preserved in our memory banks 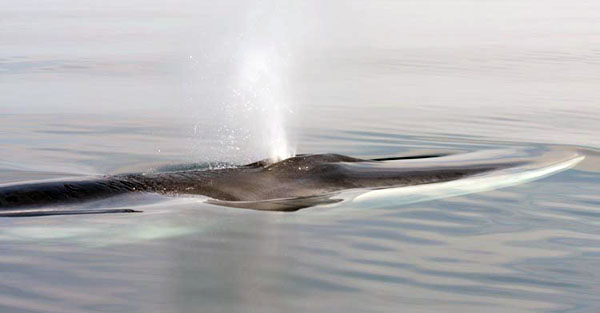 We’ve been able to squeeze in a few good days on the water in between the thick-fog days and rainy days. Since the beginning of July, the whales have decided to stick around one particular area, which makes them easier to find if we are grounded for a few days! We are finding mainly fin whales; we estimate 25 in the area, but there are likely more. There are also several minkes both offshore and within the islands.

It is now July 12, and we have only seen 5 humpback whales- all juveniles, we believe. Have our other veteran humpbacks found a more profitable feeding spot outside our research area? Or perhaps they are still on their way from their wintering grounds?
One of our team members, who also conducts research in the Caribbean, was surprised at how late the humpbacks left the breeding grounds this year. In general, they start migrating to their feeding grounds end of April, but this year there were still some humpbacks in the Caribbean in June. This could explain their late arrival to this area.

On July 8, 2010 one of our gracious colleagues, René Roy, sighted four humpbacks in the Gaspé region. Three of our well-known whales were among those sightings: Splish (H002), Hunter (H458) and Tingley (H277)- all mature females. Will they be coming to this area after? We’ll keep you updated!