Beginning of June 2010: Hold on tight.the season has begun!

With the MICS truck and trailer loaded to the maximum with equipment, computers, gadgets, food, carpet, fridge, freezer, 2 sofas and anything else we may need for the season, the team happily arrived in Longue-Pointe de Mingan May 29th. We were welcomed by warm sun, cool sea breeze, friendly neighbors, and a couple of minke whales popping up close to shore! 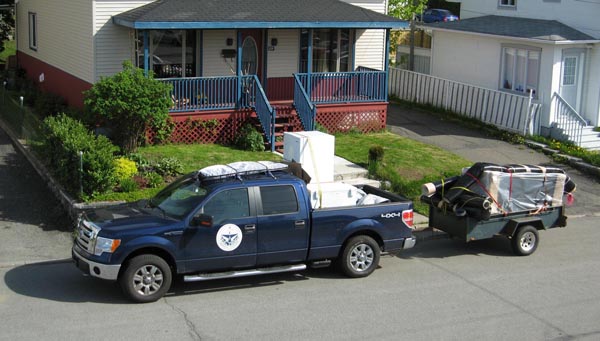 The first three days were spent doing some renovations in our faithful home, the blue house.’ New carpet, freshly painted rooms, stained clothes, revamped house. From June 1st to 4th seven of our team members participated in a training course dedicated to safety and navigation of small vessels. During the first week of June we also took our fleet of six boats out of winter hibernation and started the routine maintenance in preparation for the season.

Once one of the boats (Mistral) was prepared, we took her out for the first outing of the season on June 5th! After leaving the dock in Mingan, we didn’t even make it out of the islands before encountering two humpbacks within the islands! Judging their erratic movements, shallow diving and short surfacings, these two juveniles were likely feeding. The past few nights we have seen capelin rolling on the beach, so these humpbacks are probably taking advantage of this plentiful resource.

One of the humpbacks was recognized immediately by its distinctive scars. 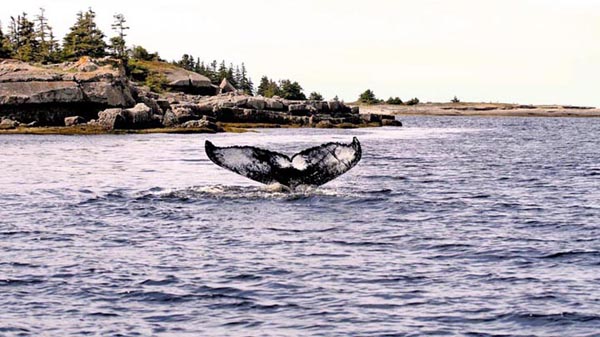 He was sighted for the first time in 2007 and had killer whale teeth mark scars on his dorsal fin. In 2009, he returned with the large scar, or rather with a chunk missing from behind his dorsal fin, probably caused by a boat propeller. He was thus appropriately named Glück auf which mean Good luck’ in German. We were glad to see him this season so early and in seemingly good shape! We did not recognize the other humpback so we are in the process of searching our catalogue to find a match. If no match is found, we will have a new addition to our humpback catalogue!

After collecting the information we needed from the two humpbacks, we ventured out of the islands and headed towards Anticosti island to see what other marine mammals were in the area. As we approached Anticosti, we saw large aggregations of birds and hundreds of harp seals beneath them. It didn’t take long before we began to see tall spouts in the same area! We approached close to 10 fin whales for photo-identification pictures, and there were at least another 10 spouts that we spotted in the area. Their behaviour is comparable to that seen in previous years early in the season. Single individuals or groups of two or three individuals which take few breaths at the surface and do not have clear movement patterns. Groups will often split up for a certain period, and then possibly return together. We also saw a few minkes and grey seals during the day.

On June 14th, we will open our doors and welcome visitors for guided tours in our unique interpretation centre and to spend a day on the water with our researchers. We are looking forward to seeing you!