On April I joined Misa Prica and friends for pleasant evening in a fine Lisbon seafood restaurant and a walk through an animated Bario Alta. The following morning we left Lisbon aboard the cramped confines of Tap airlines tight for anyone over 5’ 8- for the 2hr 50 min flight to the new airport on Pico Island in the Azores. Eight years had passed since my last visit and I was glad to find Pico again and hopefully blue whales who scoot past these waters on their way north in the spring. I had learned to never expect to see more than a handful 1-5 in late April/May, which is usually the peak sighting period for blues off Pico and Faial.

We were met by overcast skies, which hid the towering 7,000ft volcanic cone that gives the island its name. There was a slight drizzle as we stepped out of the new Pico airport and found that Serge had kindly sent a van to take us to Lajes. As we drove through the very green countryside, we saw that it was calm at sea and thought we might get out on the water since it was still early afternoon. We exited the van in front of the revamped Espaço Thalassa center to meet Serge and staff and were told that we could go out as soon as we were ready.

Within an hour we were heading out from Lajes’ new marina-now protected from the battering North Atlantic by an imposing jetty-in a 9m rigid-hulled inflatable skippered by Joao, assisted by Marianne. The long swell was moderate for this time of year at around 4 meters, but it was still calm, though gray and damp. Misa and company wedged themselves into the tight seats array in two rows in the center of the inflatable, feet planted firmly, hands gripping the seat, as we barreled out over the swells.

The sea surface was covered in Portuguese man of war jellies. The air filled bladder-like sail of this species, ranges from clear to blue, green, purple iridescent transparent colors. Pretty, but painful if one mistakenly touches the tentacles trailing below.

Corey’s shearwaters glided close to the surface all around us, skimming in unison with the roll the swells, looking for a meal. We headed out about 2-3 miles from Lajes and joined another inflatable captained by Pedro Madruga, who had located a blue whale. The whale soon appeared close by and marked its presence with the powerful detonation of its breath, much to the pleasure of all aboard. One moment the whale was high on the crest of a swell, then in the trough or in between, offering us varied views of its form in the rolling sea. Within 30 minutes we had a complete photographic profile of the blue. To pass the time between the whale’s surfacings we observed the teaming life in the surrounding waters, which teamed with myriad jelly-like organisms of all shapes and subtle translucent colors. The Azores was revealing the great productivity that can be found in these oceanic islands from micro to macro organisms.

I first traveled to the Azores 18yrs ago, during June-more to work on sperm whales than blues. In fact blues had not been reported with any regularity from the Azores and their presence in these mid-Atlantic waters remained largely undocumented. This was mainly due to lack of human awareness to the presence of rorquals there, as is often the case in such matters.

In fact a number of blue whales pass by the Azores in the spring on their way north to places such as Greenland, Iceland, Spitzbergen, Jan Mayen, northern Norway and perhaps Russian waters. The Azores seem to be a perfect stop-off point in the middle of the Atlantic. The blues and other species may follow the mid-Atlantic ridge on their travels north and the Azores provide a valuable oasis at which to rebuild reserves they may have lost during the winter for the push to even richer waters to the North. Blues probably make it at least as far south as Senegal, certainly Mauritania, during the winter breeding season. A few have been reported from the Canaries and Madeira, while others pass closer in off Spain and Portugal. Some travel up to southern Ireland and probably from there to Denmark Strait or east of Iceland.

The first half of May 2010 yielded a good photo-identification capture of blues with 23 different whales sighted along the south shore of Pico and Faial. We had new blues each day and all seemed drawn by the inshore waters of Lajes, where judging by the regular brick-red dye markers released by the whales during the day, there appeared to be a substantial amount of krill. We had several pairs and even some speed swimming between two individuals who raced along shore from the western end of Pico to Lajes. The whale seen on the first day was seen throughout the first 9 days. Indicating that some blues do stay for a bit in the islands, while most probably just pass by for a snack during migration. 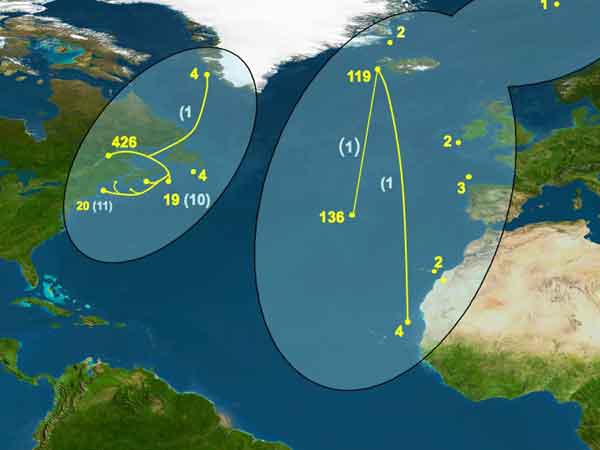 Blue whale distribution and long-ranges matches in the North Atlantic

This may be the highest total thus far for blue whales IDed during spring migration and the Azores blue whale catalog now stands at 136 individual blue whales. So far this year’s batch of whales has not yielded matches to other sighting years in the Azores or to any other area. Though this does not help to clarify dispersal for this species in the North Atlantic, it is good for blue whales, because the population seems to be larger than we perceived. In addition, the fact that we have still only one match from the Azores to Iceland may mean that they travel to northern sectors where few human observers have been present. And so there are more questions and much to discover concerning blue whale movements in the North Atlantic. Where are they going or coming from and how many are there? This year’s IDs are vital and significant new additions to the local and overall eastern North Atlantic catalog of identified individuals. We now have 119 IDs collected off western and northern Iceland, with a sprinkling of IDs from Mauritania to East Greenland and Spitzbergen for a total of 269 in the eastern North Atlantic. Every new bit of data brings us a bit closer to a better understanding of blue ecology in the North Atlantic.

Many have contributed to the catalog that now exists for the Azores. Serge Vialelle of Espaco Thalassa has welcomed our research visits and greatly encouraged ID photography of blues over the years. The two main contributors from his staff are Pedro Madruga and Joao Queresma, both excellent boat handlers around the whales, in often difficult conditions, as well as being very good photographers who have contributed many excellent quality blue whale ID pictures to the catalog. We have received significant contributions from Lisa Steiner, who has worked in the Azores for more than 20yrs predominantly on sperm whales, but has great interest in all species observed in the Azores.

Other contributors include Monica di Silva of the local university’s cetacean research group, Karin Hartman of the Atlantis Foundation and wildlife photographers Manu Tardis, Gerard Soury and Alex Goebels as well as many visiting tourists who have kindly sent us their blue whale images. Tiago and Joana in Horta and Marianne in Lajes, have also contributed to this effort.