The time has come for a mid-season news update from MICS! Over the last few weeks, we have been able to get three boats out on the water at a time: one research boat and two boats with tourists participating in outings at sea with our team. We are also pleased that our interpretation center is welcoming numerous visitors daily. Each visit marks a unique experience shared with one of our passionate interns or team members. Allow them to guide you through the world of marine mammals, explain the research conducted at the station, and share some great anecdotes with you!

Our outings on the water are intermittent- nestled in between rainy, windy and/or foggy days. As much as we would rather spend every single day in the field, sometimes bad weather days are needed to catch up with data-entry at the station.

There were a few days on the water where the ride back to the dock was quite an exercise. As forecasted, the wind would pick up in the late afternoon, just in time for the trip home A nice muscle-toning experience! Don’t let us discourage you though, these have been some of the best days of the season (weather, work, and whale-wise !)

Presently, the whales are somewhat concentrated in a particular zone of our research area, which takes approximately 1 1/2h to reach. But this 1 1/2h travel time flies by as everyone becomes captivated by the beauty of the sea and sky. As we approach the zone where the whales are, we will often ask the participants to start scoping for spouts. On of the best parts of the day occurs as the very first spout is seen; a wave of exhilaration and motivation fills the boat and everyone stares at the spout to be sure not to lose it! The whales have congregated in the east, which is more or less confirmed by one outing we took to check the western part of our research area. Here. we found only a trio of humpbacks (who happened to be traveling east). Within this trio were two well-known females  Fat Bee (H456) and Quill (H168)  and one unknown.

Yesterday (August 11), we managed to see the first spout of the day after only one hour. We took a bearing towards it, and headed towards Anticosti island to see who it was. As we approached, the visibility ameliorated and we began to see not only the single spout, but at least a dozen! It’s an overwhelming yet satisfying feeling when you need to call over the other MICS boats for help to cover all the whales around! We started working with a cow-calf pair of fin whales. The calf was covered in round, white lesions- an observation we have made on many calves over the past few years. It is still unclear what causes these lesions, however they seem to be non-lethal. Using remote biopsy techniques, we are able to sample a piece of skin from these calves to hopefully determine the cause of these lesions. This cow-calf pair has been sighted several times before this season. After this pair, we headed towards a group of humpbacks which looked as though they were intensely feeding. They turned in circles, expelled air forcefully at the surface and rolled onto their sides. They surfaced so close together that they must have been rubbing against each other underwater. They were also emitting reddish-colored feces, which could indicate a foraging bout on krill, which are also reddish in color. Four of these humpbacks were recognized immediately once they dove,  giving us a chance to take a picture of their flukes. We jumped with excitement as we realized a veteran female was among them- Pseudo (H008). As well as Triad (H163)-a well-known male, Pythagore (H671) and Adiego (H678). 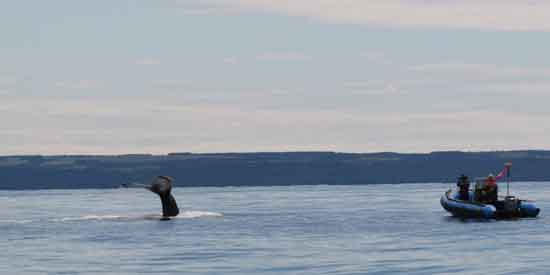 As we approached a small group of humpbacks to get photo-ID pictures, suddenly we were approached by finbacks and minkes in the same spot! Triple-species efficiency! It is interesting to observe these three rorqual species in such close proximity during the feeding season. As the humpbacks dove, we rapidly took picture of their flukes then turned the camera towards the finbacks to get their pictures just in time for their dive, then finally the minkes! While waiting for the humpbacks and finbacks to re-surface, we took advantage of the many curious minkes around the boat to take some biopsies. At this time of the season, minkes become quite abundant offshore and have nearly vanished from their early season habitat inside the Mingan islands. Normally, minkes are solitary, however this season we have observed pairs and trios of minkes on regular occasions. Some individuals are more curious than others and may approach the boat to take a peek at this large object they notice at the water surface. If the water is calm enough, and the light decent, you can often see the entire body of minkes through the water as they approach the boat and roll onto their sides to see you better. Often we first catch a glimpse of their white pectoral fins through the water and if you look carefully enough, the form of the body becomes visible. Breath-taking. The day was quite productive- good light and sea state for identification pictures, six biopsies, and a boat-full of happy participants (and team members, of course!) 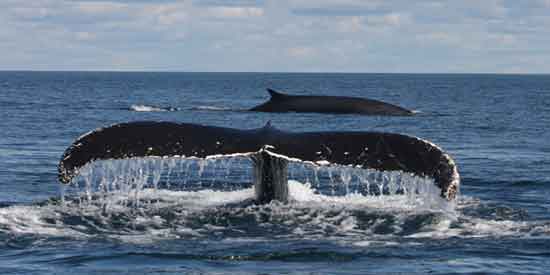 The rides home so far have rarely been flat calm. Except once. But then of course we encountered fog so thick that visibility was reduced to 5 meters. That day we were three boats on the water and as we encountered the fog, all boats joined up and continued in a single file fashion following the leader. Our plan was to pass between two lovely islands (Ile au Perroquet and Ile de la Maison) to show our day trips the magnificent bird colonies. Unfortunately, the fog was coating the islands like a wool blanket and the only thing visible as we passed through was the tip of the lighthouse on Ile au Perroquet. At least the day trips could hear the birds
The fog stayed with us until the entrance of the harbour. So for 3 minutes we regained our vision and then docked the boats. Another unique day to share with the rest of the team at the dinner table in the evening. 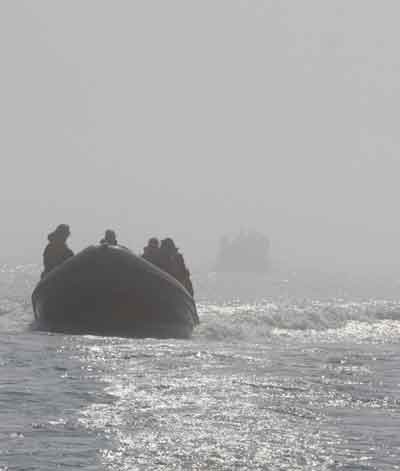 Twister and Mistral in the fog

The season is rolling at full force now-lots of tourists, lots of whales, lots of work, lots of fun. Our biggest threat is the weather, of course-so if anyone knows a kind and generous sun god- send him/her our way ! Apart from that, we are looking forward to welcoming more participants for a day on the water with us as well as sharing our experiences with you in our interpretation centre. 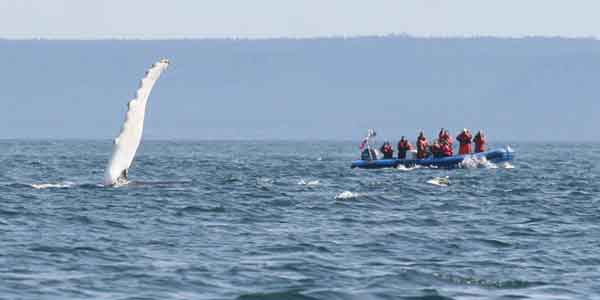