The 2009 field season ended a bit earlier than usual. Our last outings included a few notable late arrivals such as H004 Circé, H151 Spines, H163 Triad, H405 Barbillon, as well as F155, F243, and F306. The MICS team was particularly happy to see Circé once again. She had not been observed in the Mingan-Anticosti area since 2005! As for Spines, he spent nearly an hour around the MICS boats. Ever since he was a calf in 1989, Spines has had the reputation of being curious with the boats, circling them, spyhopping, even touching a boat on a few occasions! 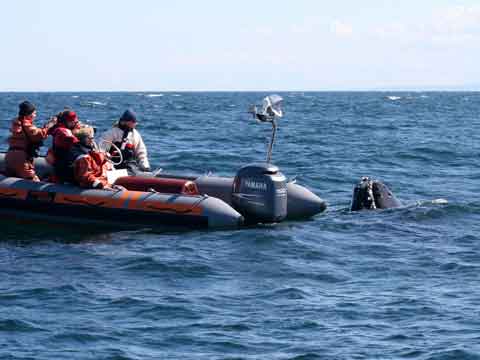 Humpback and fin whales appear to have left Mingan fairly early this year. By mid-September, we were observing only a few individuals during our days on the water. It may be that the majority of the animals had just moved on to a different area, but unfortunately, strong winds and rain prevented us from exploring the western part of our study area. Considering the MICS team was forced to stay on land during the first half of July, the 2009 Mingan field season was still fairly good. Over 150 fin whales were observed including over 100 who have already been matched to the catalogue. Just under 100 humpbacks were identified this year. Our annual expeditions to Forestville and Gaspé yielded interesting information about the movement of blue whales within the St. Lawrence and a total of over 75 blues were identified! What was unusual, however, was the fact that we did not observe noticeable concentrations of blue whales in the estuary region again this year.

We have observed fewer calves this year. Over the past few seasons, we had noted a baby boom for humpback and fin whales. This year, only 5 finback and 6 humpback calves were seen compared to 16 and 10, respectively, in 2008.

Once again, MICS would like to thank its collaborators around the St. Lawrence. René Roy, Croisières Baie de Gaspé, and Stéphanie-Carole Pieddesaux (Réseau d’observation des mammifères marins) for the information they have gathered along the Gaspé Peninsula. Yvon Bélanger and Dany Zbinden (Mériscope) for their support during the estuary expedition.

An unexpected change has occurred this year in our main research area.  Every weekend, from mid-August to mid-September, MICS team members noticed an increase in the number of private and commercial boats on the water.  On one day alone, we observed over 15 other boats in the area where the whales were!  The increase in the number of boats was probably due to warm, calm-weather days combined with the fact that the whales were less than an hour south of Havre-St-Pierre.  Due to the variability of whale distribution, it is unlikely that large-scale commercial whale-watching operations, such as those found in the Tadoussac area, will be established in our region.  However, if the whales continue to congregate in areas that are easily accessible to private and commercial boaters, we may be faced with increased disturbance to the whales as well as higher risks of collisions.  During the days of higher boat traffic, we noticed several boats zipping from one flipper-slapping whale to another with little concern for harbour porpoises, minke whales, and other marine mammals that were in the area.  If this continues, we may hold special information sessions in Havre-St-Pierre to educate boaters about proper behaviour to limit disturbance of the whales.  Through education and public awareness, we hope to benefit from the collaboration of local boaters to help us identify the movements and presence of whales in areas where we are absent.

On the night of September 18th at around 11pm, we were informed that the fishing dock in Mingan had been set on fire!  Several of the MICS team members rushed to the scene to witness this dramatic incident and to assist whichever way we could.  When we arrived, it was obvious that none of the 5 fishing boats could be saved as they were already ablaze.  Fortunately for MICS, the floating dock where we tie our boats had not been damaged.  We were able to use the only remaining boat we had in Mingan to survey the damage from the water and move the boat away from the conflagration.  Arson was the cause of the fire.  As of yet, it is unknown where or when the dock will be rebuilt.  The fishing industry in Longue-Pointe-de-Mingan suffered a great loss due to the fire since many people from the village work on the fishing boats or at the processing plant. 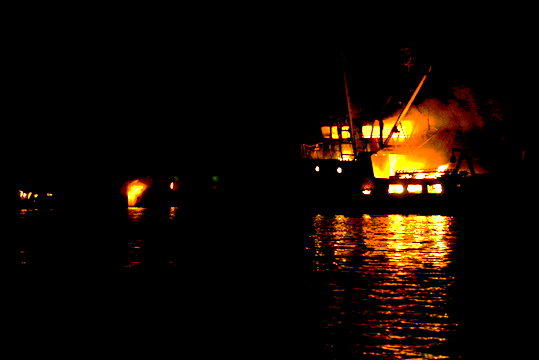 A fishing boat on fire!

The 18th Biennial Conference on the Biology of Marine Mammals

This year, the Society for Marine Mammology held its biennial conference in Québec City.  MICS took advantage of the proximity of the event to have as much visibility as possible.  MICS data was presented in a total of 9 oral and poster presentations.  Richard Sears presented observations of male-male competition in blue whale trios.  Sophie Comtois presented her Masters thesis on the change in distribution and abundance of blue whales related to the groundfish collapse.  And Per Palsbøll presented his work on the genetics of minke whales in the North Atlantic.  For a complete list of the MICS oral and poster presentations visit our research section on the left tab of the website.  MICS also had a booth at the conference to present its 31 years of fieldwork on blue whales as well as MICSPix, a software we developed to assist the digital photo matching process and catalogue management.