Quest for the whales continued

After a few days of bad weather (fog, strong winds, swell), we grew restless and looked forward to going offshore as soon as we would be blessed with accommodating weather! On August 11th, with little to no wind and the sun already warm at 6 o’clock in the morning, we hastily gathered our equipment and discussed what area to cover offshore to situate the whales.

And we are pleased to report that the quest to find the aggregations of whales was successful! Several groups of two to six finbacks as well as singles, pairs and trios of humpbacks were found close to Anticosti Island. We suspect there was a very nutritive patch of prey in this area, since it was teeming with an assortment of species.

The finbacks seem to have formed larger groups than what we had seen earlier in the season. However, these groups still remain dynamic: in one surfacing we may find five individuals together, and during the next surfacing only three may remain together, while the other two have chosen a different direction and be found some distance away. Through photo-identification, we are able to detect changes in group composition during the day, and even over the course of the season. Knowing the sex of these individuals through biopsy techniques provides another dimension to understanding the social behaviour of these animals. F100, a finback easily recognized by the hole in its dorsal fin was seen, as well as Perroquet (F045), and F291 with her calf of this year. Finbacks will often have yellowy-orange patches of diatoms (microscopic unicellular algae) on their skin, which may help us to recognize them in the field during the day; however these diatoms may be shed periodically with the skin and can not be used as reliable markings of the animal. One day, F291’s calf was so covered in diatoms, its body appeared entirely yellow rather than the true dark grey color of the skin! We still have not matched all the finbacks seen this year to our catalogue, thus there are some identities to still be revealed!

Other species among the giants

In the same zone as the great rorquals, dolphins, harbour porpoises, seals and basking sharks have been observed. Basking sharks are most easily spotted when their large dorsal fin emerges at the water’s surface, given the water is relatively calm! They skim the water peacefully, feeding on large quantities of plankton.

Two white-beaked dolphins were seen August 7th - they playfully swam around one of our boats, and took advantage of the waves created by the boat to surf! A dozen or so of these dolphins were sighted again August 12th.

Around 200 Atlantic white-sided dolphins were sighted August 11th. Now and then demonstrating their energetic style, they will propel themselves out of the water allowing us to appreciate their characteristic flash of yellow and white coloration on their flanks. Now both dolphin species are accounted for this season in our research area! 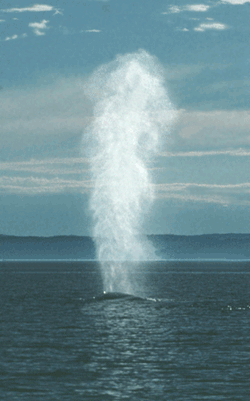