For many years, René Roy has been one of our most devoted colleagues, contributing to our research in more ways than one. Every year, he scopes the waters off Gaspé and the Lower St. Lawrence, searching for whales outside our main research area.

During November of last year, MICS team members Christian Ramp and Frédéric Paquet received reports of several spouts in the bay of Gaspé. And at the end November, thanks to René who graciously took out his boat La Macreuse’, the three ambitious researchers set off to find the whales. I say ambitious’ because lest we forget temperatures are quite frigid at that time of year! As illustrated by frozen parts of the boat! The first two days of their expedition were spent in rain, wind, and low visibility, with no animals discovered. Scoping from shore on the 30th, they saw at least one spout, and decided to give it another shot. Despite gusting winds and growing waves, they were delighted to have gone out. That day they sighted two blue whales, one of which was identified as B117. A few more spouts were spotted further East, however as the weather deteriorated, the team had no choice but to head in. B117 has been known since 1984, and was last sighted in 2003. It is usually seen at the end of the season in Gaspé or the Estuary.

After a short winter break, Frédéric Paquet, René Roy and Pierre Caron re-visited the bay of Gaspé on May 25th after seeing spouts from the shore. After a slightly rough start for their trusty boat La Macreuse, the team made it to the spout they had seen. A blue whale! This individual has yet to be compared to our catalogue to determine if it is a known whale, or a new addition. Other sightings on the 27th included three finbacks and two minkes.

Recently, René and Pierre sighted even more blue whales off Gaspé including Chameau (B103), Glaucous (B139), Bell (B189), B369 and B419. Sighting Bell this year was particularly interesting since the last time we saw this whale was 24 years ago! This represents the longest span between two observations for MICS. Also sighted near Gaspé was the 2008 calf of Darkstar (H140), one our regular humpbacks. Last year, our photos of her calf were not of high quality enough to be entered in our catalogue, and it was entered in the HITLIST. Rene’s pictures from Gaspé will allow us to give the calf an official number. 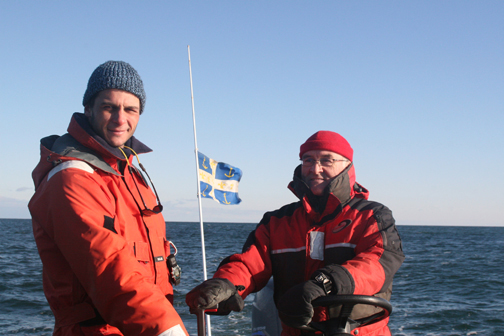 Photo of Fred and René

We are grateful to René Roy for the valuable data he provides towards our research
(see also newsletters from June 18th and September 17th of 2007).

In addition to his help on the water, René has also been an essential ally for some of our computer technology needs. As previous coordinator of the Informational Technologies Department at the Cégep de Matane, his collaboration has been vital in the elaboration of our computerized matching database, MICS Pix, and for the digital scanning of all our logbooks.

There are numerous occasions in which to thank René for the work he has done for MICS. This is why we take the opportunity to devote a part of this newsletter to describe the ways he has contributed. We know that throughout the upcoming season, he will continue to be one of our most valued collaborators, and his efforts will not go unnoticed.

On July 8th of this year, our first well-known humpbacks were sighted in the Mingan-Anticosti research area! Tic Tac Toe (H509), La Souffleuse (H531) and Gronier (H228), three older females, seemed to be among the first to arrive on the feeding grounds after spending the winter on tropical breeding grounds. Interestingly, Tic Tac Toe and La Souffleuse were sighted just 5 days earlier in Bergeronnes! These two females likely journeyed together from the Estuary to Mingan, providing further insight to the mysteries of their social behaviour. 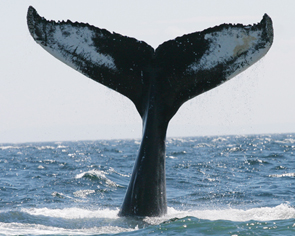