Quest for the whales!

The field research conducted at MICS is heavily tied to the weather, and thankfully, mother nature has been relatively cooperative since mid-July. Among the days we went out in July, we were able to find some of our frequent humpback visitors: Anchor (H118), Ebène (H042), and Anakin (H624; Ebène’s daughter). However, as the weather became dominated by fog patches near the end of July, we seemed to have lost track of the animals. In past years, these three humpbacks have been known to pass by Blanc Sablon before coming into the Mingan-Anticosti region.

It is not uncommon for these whales to displace themselves often throughout the season in search of large aggregations of prey. Every year, we find them in a slightly different zone within our research area. And you can imagine that if they displace themselves by several kilometers during bad weather days, it can be difficult for us to find them again when we have next opportunity to go on the water. For example, in 2007, the whales were feeding around 30km west of Anticosti, which was quite a trek to go work with them if leaving from Mingan. Thus, we moved our boats to Rivière-au-Tonnerre (Boom Boom River), a 45-min drive from Longue-Pointe-de-Mingan, in order to decrease the travel time and increase the time we had to work with the animals.

On August 2nd, three boats in our fleet headed east from Mingan to try and cover the eastern limit of our research area in hopes to locate our typical groups of whales. Despite certain doubts we had about finding the animals, we were very pleased with what we encountered that day. We observed a plethora of harbour porpoises, several minkes, and three large basking sharks which were feeding at the surface (a common behaviour since they feed exclusively on plankton). Two of the basking sharks demonstrated their curiosity by swimming around and under the boats, allowing us to appreciate the sheer size of the world’s second largest shark (the first being the whale shark). 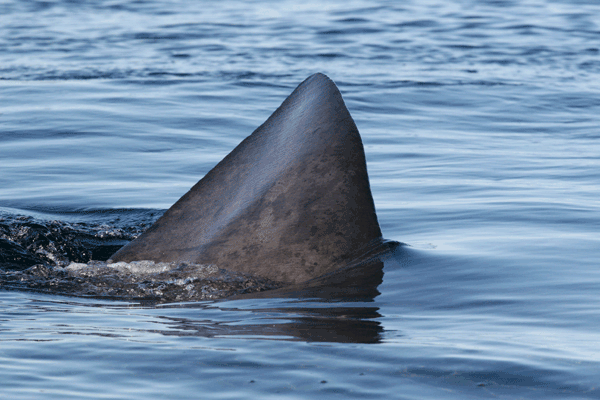 We found at least ten finbacks, and several humpbacks including Illusion (H146), Gronier (H228), Fissure (H164), and yes, the very acrobatic H704 from last month’s newsletter ! H704 can’t seem to get enough of the boats, as he/she spy-hopped, swam under the boats, flipper-slapped and tail-breached numerous times in our presence! 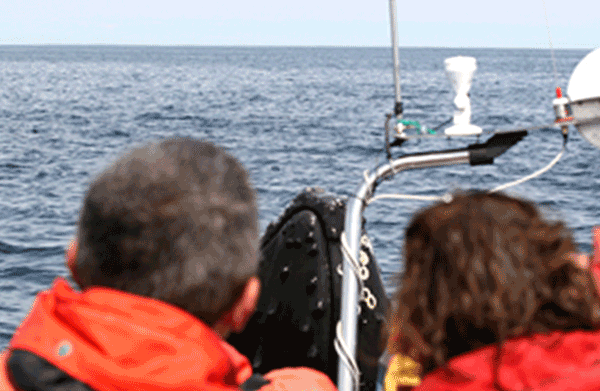 And finally, the dolphins have arrived! On August 2nd, we observed for the first time this season several small groups of Atlantic white-sided dolphins, which were feeding under a mob of gannets!

Now that we have an idea of who’s in the east, we’re looking forward to finding where our other regular visitors are feeding!

July 21 was particularly exciting because it was packed with action! Two boats, Twister and Mistral, set off towards Anticosti today in the warm sun and light breeze. Even though it was nearing the end of July, we still wondered where all the whales were hiding. As we cruised along, Richard Sears on Mistral saw some white flashes on the horizon, followed by water being splashed up. A quick look with the binoculars and we jumped with excitement at what we saw: a humpback slapping its flippers vigorously at the surface! We thrust the boat forward to get better look. As we neared the whale, the engine was turned off and we observed. And how curious this whale was! It came towards us and swam around the boat a few times, then spy-hopped to get a better look! Gawking human eyes met a huge whale eye and our adrenaline soared! After checking us out, the whale proceeded with an elaborate display of over 20 tail-breaches, rolling on its side, and back to slapping it’s flippers on the surface. The passengers of Mistral stared in awe and fumbled with their cameras to capture this moment for proof of this incredible behaviour. No one has ever been certain why humpbacks demonstrate these grand performances. Communication? Playing? Agitation? In between tail-breaches, we were able to get a photo of its fluke, and identified the individual as H704, seen for the first time in 2007, and soon to be named. Shortly after, Richard Sears biopsied this individual to obtain a small sample of skin and blubber. Part of the skin is allotted to genetic analyses, including sexing the individual, the other part to stable isotope analysis for diet determination. Blubber is used for toxic studies. 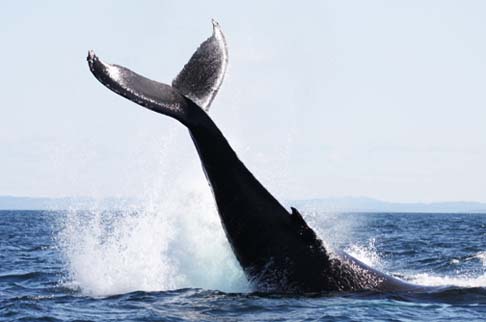 After an hour, we left H704 to go find other whales. We approached a pair of adult finbacks swimming next to each other, and prepared to take photos for identification. All of the sudden, the flanking finback cut in forcefully towards the leading finback, and some form of interaction took place underwater! The leading finback rolled on its side showing part of its tail above the surface, while simultaneously out of nowhere popped a finback calf 300m ahead of this interacting pair! The calf was charging full-speed ahead, with so much torque that it managed to propel its body half-way out of the water (we call this behaviour porpoising since it resembles how a porpoise or dolphin surfaces, rather than a great whale!). We tried to follow the calf, but its direction was totally unpredictable as it travelled at a speed of 10 knots (18km/h)! This finback calf’s behaviour could be likened to that of a colt frolicking in a field, testing out its body and covering every inch of its new environment wildly. What a sight! 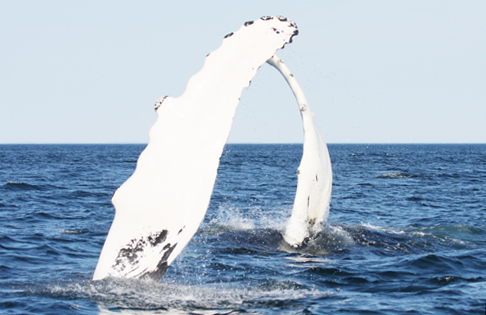 We also saw at least 15 finbacks, with more spouts that we didn’t cover! And at one point, we drove straight into harbour porpoise heaven, because we were surrounded by these tiny cetaceans! Fast swimmers just zinging by, popping up momentarily to fill their small lungs with air. Taking an artsy picture of these animals is quite the challenge!

As we approached a different pair of finbacks in the afternoon, I observed something that I had never seen before: a minke whale breached vertically right in between in the two finbacks! We were startled and chuckled a little because the minke looked completely out of place!

As the sun began to sink, a golden hue was cast across the sky, and the passionate MICS biologists decided to head home before dark. Another exhilarating day to enter in our logbooks!

Stranding at Grande Île in the Mingan Archipelago

Although at MICS we work mostly with living whales, it is inevitable that certain opportunities present themselves to study these whales post-mortem. Working with stranded whales contributes to our research in several ways: first, it helps us to determine the cause of death, which in turn helps to discern the threats imposed on the marine mammals of the St. Lawrence. Second, it allows for the collection of various samples which we would otherwise not have access to with living whales.

On July 14th, the MICS team was notified that a dead humpback whale had stranded on one of the larger islands in the Mingan Archipelago. The following day, we scrambled around the station to prepare all the equipment needed. When the opportunity arises to learn more about these whales (even dead ones), you want to make sure you have the proper tools to collect all the information you can! Alas, although the entire team was itching to go meet the dead whale, a few had to stay behind to man the station. Four team members, Katy Gavrilchuk, Marion George, Bertrand Charry and Frédéric Paquet, geared up in a hurry and set off in one of MICS’s trusty boats, Twister, to Grand Île.

We had been warned that there was nowhere to dock the boat on the southwest side of the island, ironically where the whale was. So we moored Twister to a small floating dock on the east side, hopped into another boat provided by Parcs Canada, and hauled ourselves to shore. Equipment in hand, we hiked along the shoreline in our bright yellow mustang suits and knee-high rubber boots. Two sweaty hours later, we came across the carcass. Fortunately, with the nice breeze, the typical putrid smell of whale carcass was barely apparent. Something that had been trailing at the back of our minds since we received this stranding report was: Is this an individual that we know? As we approached the carcass, we recognized its state of decomposition was too advanced to be able to identify it. Apart from Frédéric, this was our first experience with a stranded whale. Seeing the entire whale right in front of you makes you appreciate the sheer size of these animals, something you seldomly comprehend when you only see them surface momentarily in the ocean. The skin actually feels like a rubber tire! 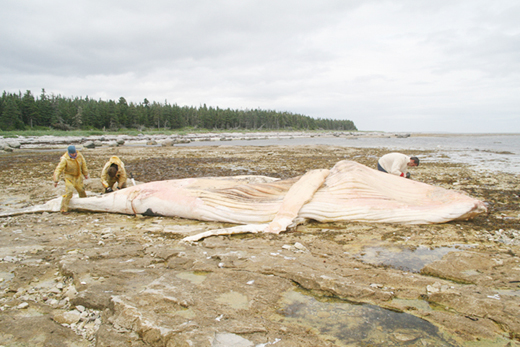 We immediately got to work in order to collect all the information we needed concerning this whale; Fr édéric began with taking pictures, Bertrand with scalpel and knife in hand began taking tissue samples (skin for genetic analyses and diet determination, blubber for contaminant analyses), while Katy and Marion took various measurements of the whale.

Cause of death is still undetermined; no scars or lacerations were found, nor any signs of entanglement. The length of the whale was approximately 9.7m, which is quite long for a young female humpback whale. (We were able to determine it was a female by locating the mammary slits). Curiously, the baleen were quite small, seeming underdeveloped. Was this a calf of this year still feeding on its mother’s milk? Stable isotope analyses of the skin and baleen may indicate whether the diet of this whale comprised mainly of milk or more solid food. We also took additional samples including barnacles attached to the lower jaw, the eye ball, and cartilage and bone from the pectoral fin. We wanted to take the whole pectoral fin back to the station to display the bone structure in the museum, but that plan was soon abandoned when we realized that all four of us could barely lift it! After one hour, the tide began to rise and we were forced to leave the whale. We were unable to access the internal organs, which could have provided more insight to the cause of death, and at the least, the internal state of decomposition. We prepared for the long trek back to Twister, lugging our newly acquired dead whale samples (which merited several rest-breaks along the way!). Once we heaved our weary bodies into the boat, we headed back to Mingan bobbing up and down in the growing waves. Back at the station, we cleaned all the equipment (which was entirely smothered in whale goop), and labeled and stored the samples in the freezer.

What an adventure! Each day is filled with unique experiences when you study these magnificent creatures, dead or alive!