Late August of 2007 I enjoyed a much too brief period in the field observing blue whales with two other members of the MICS team in the Forestville-Escoumins area. In a summer of disruptive weather we were presented with one of those remarkable flat calm, clear days, which make working at sea in a small boat a pleasure. The summer, however, had yielded few blue whale sightings and no more than 2-6 had been seen in this portion of the St Lawrence Estuary per day since early July.

We glided upriver on a mirror towards Les Escoumins. Billowing spouts of 3 or 4 blues stood out against the dark forested North Shore. We first approached a pair recognized as female B197 known since 1988 and male B185 known since 1984. The female swam in the lead, the male flanked to the side, as is commonly observed in female/male pairings of this species. Such pairings last from a few hours to at least five weeks. Females accept to be trailed by tending males as early as late July. And though mating usually takes place in late fall or winter, the longer a male can maintain such contact, the better he can display his fitness and make an impression that will last until the female is ready. By flanking the female to either side, the male may benefit energetically using less energy as it swims and forages. It is possible that females tolerate a tending male, because he may keep other less fit males away, reduce harassment and thus allow her to feed without expending energy used in avoiding other males.

If another male approaches aggressively, the calm demeanor of a pair changes in an instant. Slow, almost lazy movement at the surface between 10-12 minute dives is suddenly replaced by rapid change in direction, very short dives, and quickened pace. Here the intruder was male B335-known since 1996 and as was the case for the pair a regular visitor to the St. Lawrence Estuary.

The scene we viewed changed from aquatic pastoral to explosive bursts of water in an instant. 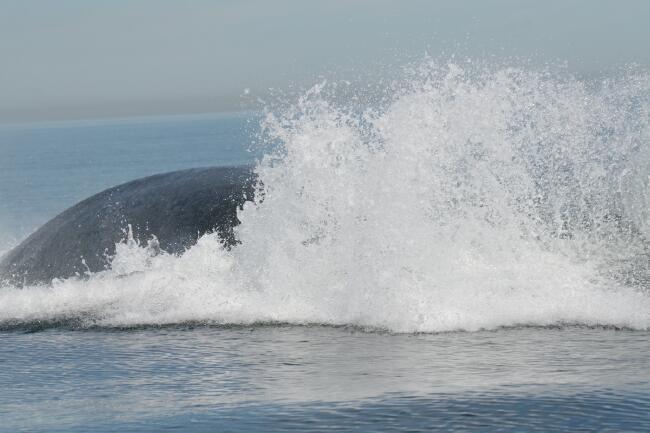 B335 had accelerated and closed with the pair during the last dive from a distance of at least 800m. Having disrupted the moment, the intruding male caused female B197 to speed up suddenly, forcing both suitors to scramble to keep up, as B335 tried to displace B185. During these first furious moments of activity we observed portions of heads, body rolls, and tails flicked in a violent boil of water. The conflict quickly escalated into a twisting, turning spray-filled high-speed drag race of 70-80-ton bodies during which tail, flipper and body slams were delivered forcefully.

As the pace quickened and we saw the submarine-like shapes of all three whales hurtle, concatenated, pulling from the surface in an envelope of water, their spouts initially kept to subsurface bubbling by the surface tension, finally bursting free in a mighty explosion of spray forced up by the irrepressible rush of massive bodies. It was stunning to witness these powerful animals held-even if briefly by the elastic grip of the surface, stretching the liquid envelope as they furiously tore through. The water seemingly trying keep a firm hold and not allow them into the welcoming air.

In an adrenaline filled moment the three blues erupted high through the surface, positioned to land on us, it seemed. Their forms projected half way out, towering above and fortunately just to the sides and behind us, before porpoising forward in a splendid projection of spray. For a moment we thought we would be but a nuisance piece of flotsam dispatched by their fervent gamboling race, but they managed to avoid us and despite an impressive landing splash we somehow escaped barely sprayed.

A bit stunned, we watched as the two males raced by, up and out porpoising side by side banging and slashing into each other as they went. The female B197 content to course ahead letting the males settle who would remain to tend her, revealing, for the moment who was the most fit of partners. The spectacle was powerful and grandiose.

After 24 minutes B335 the interloping male pulled reluctantly away, perhaps collecting his strength for another bout on another day. The contact had been swift and thunderously violent in a fluid display of massive muscular sprints, head rushes, body slams, tail swats and numerous body-part glances.

We were reminded of horses or antelopes coursing side-by-side trying to displace or unbalance each other to establish dominance. Land animals have to contend with falls to the ground, landing on all matter of strata or even from cliffs, while whales fall back into cushioning water from brief forays into the air. It is a fast-paced shoving match between super heavy weights, which must leave the combatants bruised and tired. And in this instance the males must have been evenly matched for the joust to last as long as it did. After 8 minutes B335 surfaced several hundred meters away from the pair, abandoning the heated chase to return to feeding and stretching away his wounds in the cold waters of the St Lawrence.