2007: a record-breaking year!
The 2007 season has been particularly frustrating for MICS team members. Wind, rain, and fog have prevented us from going on the water on several occasions. Even more frustrating is the fact that this season may turn out to be a record-breaker with regard to the number of different individuals photo-identified as well as the number of calves observed! With good weather, what would it have been like? At this point, we have seen over 200 (perhaps as many as 300!) Fin Whale individuals and we are approaching the 100 mark for Humpback Whales. As for calves, we now have 15 finback and 14 humpback calves. We have already beaten the 2006 record number of identified humpbacks (79 different individuals in 2006) and we are very close to equalling the 2005 record for humpback calves (16 calves in 2005). What’s more, we have been able to observe all these individuals even if we have had considerably fewer days on the water. As of this date in 2006, we had 67 outings compared to only 47 so far this year! Additional difficulties this year include the great distances covered by the animals on a regular basis (see previous newsletters) as well as their short residency time in a given area, making them difficult to track.

A day to remember
Though strong winds often forced us to spend shorter days on the water, we have had a few memorable days in the field. Last Friday August 31st, was a day to remember! After three hours of roaming through the south-western edge of our research area, the first spouts were sighted. Two MICS boats were finally able to work in good sea-state conditions and good light (a rare opportunity this season!). Both boats were able to cover the 25 finbacks that were dispersed in the zone. In the midst of the Fin Whales, dozens of Harbour Porpoises were darting back and forth and a lone humpback, Stalagmite (H472), was observed logging and playing with algae. Once the whales had all been identified, the two boats went separate ways and found more humpbacks further East and South. Those who were on board Twister would have been happy about their day if it had ended there That was not the case! 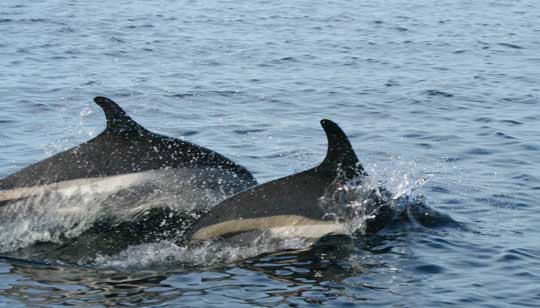 Far in the distance, some splashing caught a few peoples' eyes. What originally looked like a flipper-slapping Humpback Whale turned out to be leaping Atlantic White-sided Dolphins! A group of approximately 100 dolphins was feeding in the area. Some of them showed signs of curiosity towards the boat as they came turning around it or followed it in its wake. With only a few hours of sunlight left and a thick fog moving in, the team-members aboard Twister, Frédéric Paquet and Limoilou Renaud, decided it was time to make the long trip back to port. As they started moving away from the dolphins, an enormous dorsal fin came out of the water next to the boat. The team-members were suddenly filled with a mixture of surprise, confusion, and excitement at the realisation of what they had just seen: an Orca!

This is the first Killer Whale sighting in this part of the St. Lawrence Gulf since 1999. During the late 1980's and 1990's, a pod of four transient Orca (the Jacknife pod) were observed almost every year along the North Shore. Jacknife, Jessie, Javelin, and Junior had attained an almost legendary status at MICS after having been observed on a few occasions attacking Minke Whales. The legend had grown throughout the years since 1999 when Jacknife, the big bull of the pod whose peculiarly shaped dorsal fin was unmistakable, was last seen roaming alone along Anticosti Island. There is no definite explanation for the disappearance of Orca from the western part of the gulf, though one of the possible causes could be that, as top predators in the food chain, they may be at a higher risk of accumulating toxic contaminants in their blubber. The pictures taken of the solitary Orca last week will allow us to compare with other catalogues of the North-West Atlantic and find out if it is already a known individual. Aside from the shape and notches that can be present on the dorsal fin, the characteristic marking on these whales, the saddle, is at the base of the dorsal.

The young male observed last week followed Twister for over 30 minutes as the fog thickened around us. He would come next to the boat presenting his ventral side and often tail-slapping or swimming under the boat. By the time the team-members reluctantly decided to leave, the sun was almost down. The trip back to Rivière-au-Tonnerre, in the fog and drizzle, took over two hours and it was dark by the time everyone was back on land. We have not had the opportunity to return to the area where the Orca was spotted and he has not been seen since. Even if we may never see this individual again, he will have left us with a day to remember and a legend that lives on! 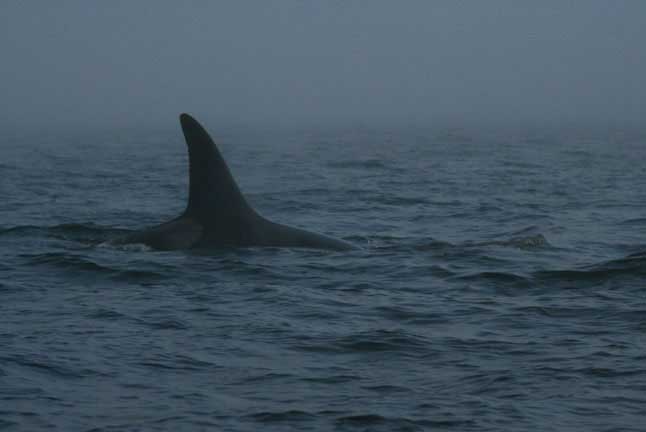 The tall dorsal fin of an Orca coming out of the fog.