A Blue Whale calf in the Gulf of St. Lawrence

2007 started off with a promising observation in Gaspé. In the beginning of May, the Croisieres de la Baie de Gaspé team notified us of a Blue Whale cow-calf pair seen in the area. This is only the 17th time a Blue Whale calf has been observed and photographed in the St. Lawrence by MICS since our foundation in 1979. Long-time friend and MICS collaborator René Roy spent 2 days in difficult conditions to find and photograph the two whales, and his hard work paid off! His pictures of the mother were matched to B295. This whale was first seen by MICS in 1993 in the Mingan area. Since then, she has mostly been observed in Gaspésie and was photographed once in the Sept-Iles region.

In July 2006, B295 was observed along the Gaspé peninsula coast by Andrea Bendlin and Valentine Ribadeau Dumas during a MICS research expedition. Two months later, she was seen again, this time by Richard Sears and Frederic Paquet during a three-week trip aboard the Shelagh. A blubber sample taken from B295 in 2006 may reveal interesting information as to her hormone levels. Since gestation in Blue Whales lasts approximately one year, B295 would have been pregnant when the sample was taken. Will we ever be able to perform pregnancy tests on whales?! Why are Blue Whale calves so rare in our waters? Though it is still unsure why we observe so few calves, it may be that high contamination levels found in St. Lawrence Blue Whale population affect their reproduction. Many questions relating to the reproduction of these animals remain unanswered. Hopefully, the 2007 field season will bring us a few steps closer to solving some of these mysteries.

Though we have yet to find large concentrations of rorqual whales in the Mingan-Anticosti study area, sightings are increasing around the gulf. Two MICS collaborators, Jacques Gelineau and Guy Coté have already observed juvenile Humpback Whales along the North Shore!

MICS's interpretation centre has a new exhibit. A 50-foot (17-metre) sculpture of a Fin Whale now swims along our exhibit hall! Daniel Grenier and his brother Christian designed and installed it over the past three weeks. Daniel will be returning in September to finish painting the Finback as well as a mural covering a whole wall of the interpretation centre. Daniel's murals and life-size sculptures are the primary focus points of our guided interpretations and educational programmes relating to the ecology and natural history of the marine mammals of the area. The new mural will incorporate the Fin Whale sculpture and show all the species of marine mammals found in the Gulf of St. Lawrence. It replaces Daniel's first mural that was used to educate visitors for over 10 years. The old mural was taken down and we are currently looking for an organisation that would be interested in displaying it. If you know of anyone who is willing to house a 30’x15’ Daniel Grenier original, contact us at mics@globetrotter.net ! MICS would like to thank the Canada Economic Development, Parks Canada, and Alumineries Alouette for their financial support to complete this addition to the interpretation centre. 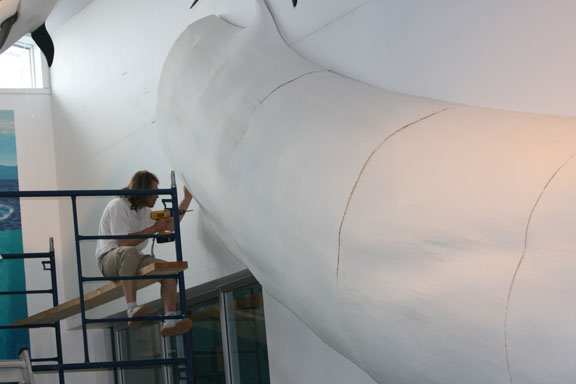 ...replacing
the old one 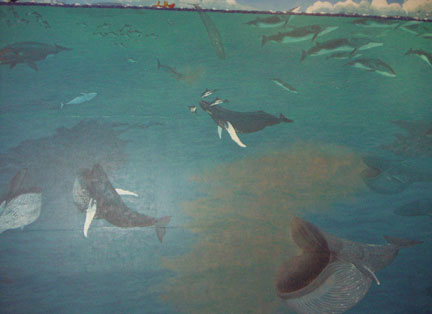