Strong winds and rain have prevented us from going on the water very often over the past two weeks. In our last newsletter, we reported an unusually high number of Humpback and Fin Whales very early in the season including several cow-calf pairs. The observation peak for these species occurred on July 9th and was estimated at 45 finbacks and 25 humpbacks in the same area! Unfortunately, on the days that followed, the whales seem to have dispersed. Strong winds have made for short days during which we are unable to cover extended portions of our research area. Consequently, we have only been able to find a few dispersed individuals rather than the large concentrations that we should normally be seeing at this time of the year.

Valentine and Petra returned from our annual Gaspé research trip. Their two and a half week expedition resulted in 25 identifications (13 Blue Whales and 12 Humpback Whales), including three humpback calves and four new additions to the catalogue. Their observations revealed interesting information about humpback movements in the Gulf of St. Lawrence since many were later observed in the Mingan-Anticosti region.

MICS would like to give a special thanks to our collaborators in Gaspé for their continued support: Gilles Shaw of the Forillon International Youth Hostel as well as Jean Roy, Guy Sinotte, and the rest of the Croisières Baie de Gaspé crew for going out of their way to help. We would also like to thank Stéphanie Pieddesaux of the Réseau d’Observation des Mammifères Marins for contributing her sightings as well as Lise (Motel Chalets Baie de Gaspé), Gaétan Cassivi (Garage Gaspé), the Rivière-au-Renard Coast Guard and Forillon National Park.

Last week, we received a call from a homeowner in the small fishing village of Sheldrake reporting a Minke Whale carcass on the beach. A MICS team was dispatched to take measurements of the animal as well as skin, blubber, and muscle samples. Once on site, the team was surprised to find the animal’s head was missing! A few days later, a minke head was found beached on Anticosti Island. It is still unsure how the whale died but unusual scars on its flanks combined with its general condition suggest that a ship strike or entanglement in fishing gear may have caused death. 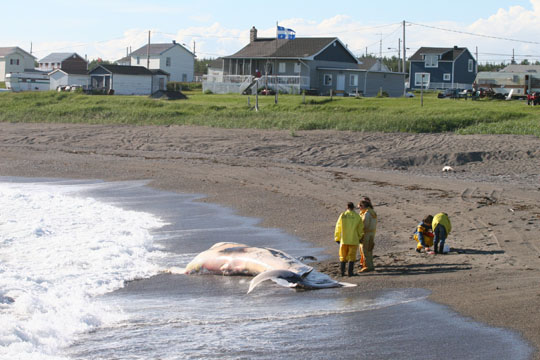 Sampling of a Minke Whale carcass in Sheldrake

Carcasses such as these give researchers a chance to gain valuable information. Simple measurements such as body length cannot be taken when following the animals on the field, and the only reliable data available must be extracted out of old whaling records. Skin and blubber samples can be used to calibrate for certain tests that will be done on the smaller biopsy samples that are taken on the field. For this particular carcass, Brian Kot, one of our team members from the University of California in Los Angeles (UCLA), took samples of the ventral pouch to measure elasticity and strength. His results should help him better understand the bio-mechanics and physical processes involved in rorqual feeding.