Splish H002
On September 16th 1980, two MICS boats went out to sea for a day of research. The logbook describes a sunny day with calm seas. The boats scanned along the North Shore to the village of Magpie finding Fin Whales, White-sided Dolphins, and Grey Seals before heading to PWA (West Point of Anticosti, for us!). That’s when they found two Humpback Whales travelling East along Anticosti. That was the first time Humpback Whales were sighted by MICS observers in our current research area!

The logbook describes the pair, H001 and H002, as having very white flukes and showing signs of curiosity towards one of the boats. As they were followed, the pair was very active: flipper-slapping, tail-slapping, tail-breaching, and breaching. Their behaviour inspired their names: Splish and Splash from the Bobby Daren song. Although we usually give Humpbacks a name that evokes characteristic patterns on their flukes, Splish and Splash have kept their names over the past 28 seasons.

Splash, a male, was last seen in 1998, entangled in fishing gear. Splish, on the other hand, is still a regular visitor to the Mingan-Anticosti region. She has been observed almost every year since 1983. Though she frequently visits our Mingan research area, she has also been sighted in Gaspésie and Sept-Îles. Over the years, she has been seen with 5 calves: H151 Spines (1989), H379 Leprechaun (1993), H480 (1997), a calf for whom we don’t have adequate pictures of in 2003, and another one this year who will be given a number in our catalogue at the end of the season. Spines and Leprechaun, two males, are regular visitors to Mingan as well; they have both been observed in our research area this year. Since she was already an adult when we fist observed Splish, it is very likely that she has had other calves, some of which who could also be regular visitors to our research area. 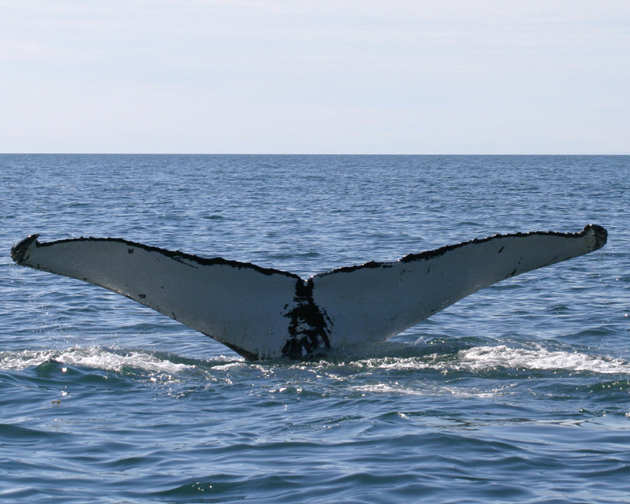 Last week, Splish surprised us all. You may have read in a previous newsletter how she and her calf were seen in Mingan less than three days after being observed in Gaspésie. After a few weeks of feeding off Anticosti Island, she made the 80-nautical mile (144 km) trip back to Gaspé with her calf and was seen by observers in that area. What surprised us, however, was that she was seen once again off PWA on August 8th!

Travelling whales!
Long-range movements within the Gulf of St. Lawrence are not uncommon and we have several reports of individual Humpback, Fin, and Blue Whales travelling from one area to another. What is incredible this year is the number of these long-range movements that are being reported. Splish and her calf are only one example of the movements the animals are doing this year. Another example is Tick-Tac-Toe (H509) and her calf. They were the first cow-calf pair observed this year on June 26th and were seen in the area for a few weeks. By July 18th, they were photographed by an observer aboard a whale-watching boat in the Tadoussac area where they were sighted several times for about a week. By August 8th, Tic-Tac-Toe and her calf had returned to the Mingan-Anticosti region at the same place she had been observed in June!