After several days of searching throughout our study area, the MICS team has finally found the large Fin Whale concentrations characteristic for this time of the year. More than 30 of these big whales were seen this week at the eastern outskirts of our research zone. This finding coincided with the arrival of the veteran of the team, Alain Carpentier. 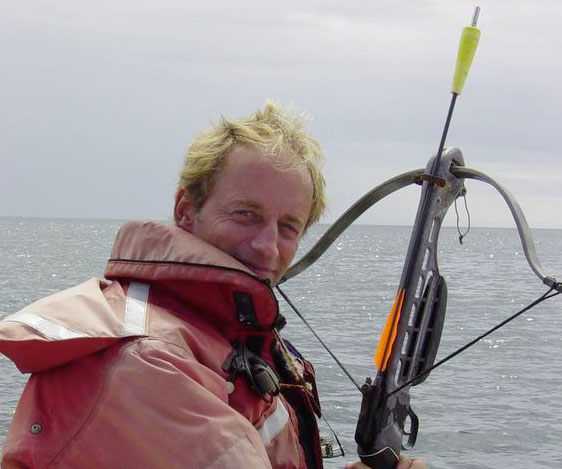 On Alain’s first day on the water, he not only managed to find the concentration of Fin Whales (including our sixth cow-calf pair), he also found five Humpbacks and a group of White Beaked Dolphins!

This week also marked the expected retrieval of a Pop-up hydrophone that we had deployed in the Baie-Sainte-Marguerite, near Sept-Îles, last October (described in last year Newsletter). For this project, MICS has been collaborating with the Mériscope (a Swiss research group based in the St. Lawrence Estuary) and Cornell University’s Bioacoustics Research Programme. Hydrophones of this type have been used to record whale vocalizations for a few years, but the one we deployed near Sept-Îles was to be the longest deployment ever attempted (nine months). A few weeks ago, we had unsuccessfully tried to recall the hydrophone from its 134 metre-deep resting place by transmitting a special signal with an underwater microphone. Upon hearing this signal, the hydrophone should have released its sand bags and popped-up to the surface. Another mechanism had been incorporated into the device to make it return to the surface on a precise date and time. Since our first attempt to retrieve the pop-up had failed, our Plan B was to return to the deployment site at this pre-determined time, July 7 at 9h00 (plus or minus 20 minutes!). Unfortunately, the MICS team, accompanied by Lucia Di Iorio of the Mériscope, never heard the hydrophone’s radio signal at the surface. Several variables may have caused the device to malfunction, but it is probable that a short-circuit may have caused it to return to the surface much sooner than planned and that it has been drifting in the Gulf of St. Lawrence for some time.

For those who might be interested: the buoy is a large yellow sphere about one-metre in diameter. If found, please contact MICS or Cornell University’s Bioacoustics Research Programme (their coordinates are written on the buoy). A 250 $US reward will go to whoever finds this valuable equipment!