Andrea Bendlin and Valentine Ribadeau-Dumas, our team in Gaspésie, have extended their stay in Cap-aux-Os. Even after two weeks of intensive fieldwork in the Baie de Gaspé and surrounding areas, there are still many more animals that need to be photo-identified. The Gaspé research area is teeming with marine mammals at this time of the year; Andrea and Valentine have now identified 18 Humpback Whales and 15 Blue Whales. Most of the Humpbacks have been matched to our catalogue and are individuals that we regularly see in our Mingan study area. One of the most notable observations so far in Gaspésie is Fleuret (H009)! Fleuret was first observed in Mingan as a calf in 1982 with her mother, Pseudo (H008). After an absence of five years she has returned to Mingan every year since 1988. Over the course of her 24 years we have observed Fleuret with 6 calves, her first being in 1991. Last year’s calf, H637, was also seen by Andrea and Valentine in Gaspé.

H009 Fleuret and last year’s calf, H637.
Both have been observed in Gaspé this season

Though we are quite certain that Fleuret will eventually come to Mingan over the season, it is unlikely that her calf will return the following year. This is consistent with Christian Ramp’s work in the Gulf of St. Lawrence, which has demonstrated that few calves during their younger years, and especially the males, return to the area where they were first observed with their mother. MICS’s Gaspé team have now observed four of last year’s calves: Fleuret’s, Circé’s (H004), Anchor’s (H118), and Stalagmite’s (H472). Hopefully, all of these Mingan regulars will be seen in our waters again in 2006, but in defence to Christian’s Ph.D. thesis, we hope their offspring won’t venture too far North!

This week also marked the arrival of Brian Kot. Brian has been collaborating with MICS since 1998 and is now working on his Ph.D. at the University of California, Los Angeles (UCLA). His research seeks to better understand the feeding strategies and biomechanics of engulfment feeding in the rorqual whales. Brian’s field observations and video analysis of surface-feeding behaviour by Blue, Finback, and Minke Whales allow him to design physical models of whales that are used in laboratory water tunnels to simulate flow dynamics involved in prey filtration. In addition to his fieldwork, Brian has agreed to proofread the English version of the weekly newsletter during Andrea Bendlin’s absence! 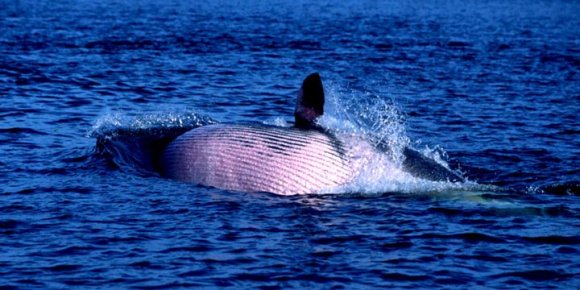