The past few weeks have been fairly hectic for the MICS team. Many days on the water and a small team have slowed down some of the work on land  including updates to the newsletter! Richard Sears, Valentine Ribadeau-Dumas, and Morgane Martin have left for our yearly research expedition to the St. Lawrence estuary to study the Blue Whales that spend part of the summer months there. The estuary team will spend 5 weeks based out of Portneuf-sur-Mer as they gather more information on this endangered species. Richard, Valentine and Morgane have since been replaced by Alain Carpentier and Andrea Bendlin.

We have recently spent several days on the water and have made interesting observations. Here is a summary of the observations that we have made so far during the 2006 season:

Fin Whales (Balaenoptera physalus)
This has been an exceptional year for Finbacks. We have now photo-identified over 120 different individuals and we have observed 15 calves. Not only have we seen an enormous amount of these giants -- the second largest animal ever to have lived on the planet, but their behaviour has been most unusual. On several occasions, we witnessed Fin Whales engaging in social behaviour uncharacteristic to this species. Whereas we normally see them calmly feeding in formation, this year, the Finbacks have on several occasions porpoised out of the water at high speeds, turned over on their sides, and have even hit each other with their flukes!

Julien Delarue has been able to make several hours of recordings for his masters thesis at the College of the Atlantic (LINK). His work with acoustics should shed some light on this species whose numbers never seem to stop increasing in our research area.

Humpback Whales (Megaptera novaeangliae)
The 2006 humpback season is in full swing! Though we only have 3 calf sightings for this season, we already have over 50 different individuals including 8 juveniles.

H008 Pseudo has arrived with her seventh calf. One of her daughters, H009 Fleuret was observed in Gaspé as well as in Mingan. And H637, Fleuret’s calf from last year, was also identified in the Jacques-Cartier Strait. That’s three generations who have returned in the Mingan-Anticosti region! H637 still hasn’t been baptized. The more popular names for this male during our last naming party were: Northwest, Tipi, and Mont-Blanc. All of these names refer to the characteristic v-shaped mark on his left fluke, easily noticed on the field. Feel free to voice your opinion or make a new suggestion! 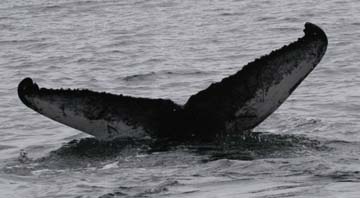 Blue Whales (Balaenoptera musculus)
For the past 15 years, MICS’s main research subject has been relatively rarely observed within our Mingan research area. Throughout the years, MICS team members have been dispatched to other parts of the Gulf of St. Lawrence as well as to Mexico, Iceland, and the Azores to study Blues. This year, however, it seems that the Blues have returned to the area. Actually, three individuals have been observed in the beginning of August in the Jacques Cartier Strait and at least 6 others have been seen further west in the Gulf. Among these whales was Quicksilver, an animal known by MICS and last seen in 1984. Numerous other Blue Whale observations have been reported in the estuary and it seems that these whales have returned to the Sept-Iles area.

Other marine mammals
Harbour Purpoises (Phocoena phocoena) and Minke Whales (Balaenoptera acutorostrata) are still present in the islands as well as offshore. On the other hand, we have only seen White-Beaked Dolphins (Lagenorhynchus albirostris) twice this season.

On their way to Gaspé and back, Valentine and Andrea came across several groups of between 20 and 40 Long-Finned Pilot Whales (Globicephala melaena).

Birds
We’ve only seen a few Wilson’s Storm Petrels (Oceanites oceanicus) this season. But the petrels we have seen were seen in large numbers in the proximity of Blue Whales. Gannets (Morus Bassanus) have been very abundant along the coasts this summer. We have also seen Long-Tailed Jaegers (Stercorarius longicaudus) throughout the season. Normally, these birds are fairly rare in the Gulf. 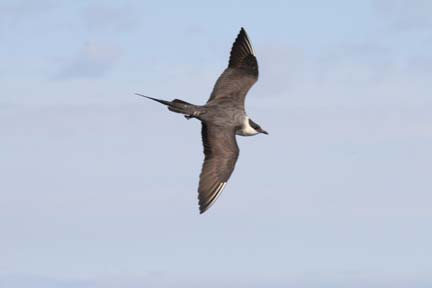 Le Shelagh
This week, Richard Sears, Fréderic Paquet, and Alexandre Nastat have left Mingan and are onboard the Shelagh, a 48-foot converted lobster boat. For the next 3 weeks, they will transect the Gulf of St. Lawrence looking for new Blue Whales.

Finally, we would like to announce an addition to the MICS familyCongratulations to Thomas and Camille on the birth of their baby boy!