In May Geoff Green of Students on Ice asked me to join the science staff on an expedition for high school students from Iceland to Baffin aboard the Explorer-a vessel famous for its treks in polar waters. I agreed to take part and on July 22 was back in Iceland where I have been to work on blue whales for 2-3-week periods in summer over the last 9 years. After 3 days in Icelandic waters we were to travel to the southern tip of Greenland and up the west Greenlandic coast for a day before heading across Davis Strait to Baffin Island and into Iqaluit August 5 for the flight home.

My main interest-as you might imagine-was too observe and collect data on marine mammals and in particular find blue whales. The first evening we sailed South and then East to the Westman Islands . We didn't spot any cetaceans until we got back up North to Olafsvik on the Snaefelsness Peninsula . Olafsvik is on the North side of the peninsula, which about half way along the west coast of Iceland , and has been the main base for our blue whale studies in Icelandic waters over the past decade.

There were few marine mammals here as well, with only a group of 4 white-beaked dolphins and 2 minke whales sighted off Olafsvik. The local whale-watching operation confirmed that it had been a poor season for cetacean observations and this for the 3 rd year in a row. Usually blue, fin and humpback whales can be sighted in good numbers off the tip of Snaefelsness by late June and well into July.

On July 26 we began our long trek directly to the southern end of Greenland . The weather was clear and the wind slackening. In fact we had a very good crossing with calm clear conditions until we got close to Greenland . Right from 09:00 we started seeing whales including several large male sperm whales and fin and Sei whales. The day's observations began at 63º17N X 30º 03 W out in mid Denmark Strait . By 19:43 we had seen a total of 3 sperm whales, 4 pilot whales, 10 white-beaked dolphins, 4 fin whales, 1 humpback whale, 2 harbor porpoise, at least 30+ Sei whales and a cow and calf blue whale pair. The two blues were spotted in amongst some Sei whales at 18:00. The blue whale calf was already larger than the Sei whales at about 7-8 months of age.

Because it was calm and we had made good time. Three of us were able to get out in one of the zodiacs and take Id pictures at close range of both the mother and calf, while the Explorer stayed just astern, but close enough for those aboard to get a good view and photographs of the rare sighting.

The pictures taken of the female have been matched to the Iceland and St Lawrence blue whale catalogs without finding a match. While it would have been interesting to match this whale to another area, it was gratifying to find a new blue whale female and calf. The Icelandic waters have yielded 15 calves over a total of 48 days of observation since 1996; while in the St. Lawrence we have recorded 16 calves over 27 field seasons over about 100 observation days per year. This would seem to indicate that there may be reduced reproduction for the St. Lawrence and that the Icelandic stock is in a healthier reproductive state. In order to be more certain about calf numbers in eastern Canadian waters, we need to collect data on blue whales outside the St Lawrence in Scotian and New Foundland shelf waters, areas for which there has been little effort.

This cow and calf blue whale were valuable additions to the blue whale catalog and contribute to knowledge of their population, distribution and dispersal.

The next day July 27- we carried out observations from 07:00 to16: 30 when we were enveloped in fog. The total for the day was: 4 Atlantic white-sided dolphins, 4 white-beaked dolphins, 6 fin whales, 1 minke whale, and 5 killer whales, just as we entered the fog. The killer whale pod was made up of two adult males, 1 calf, and 2 adult females. The last sighting of the killer whales was at 60º 15N X 42º 16W.

From that point to Greenland we had poor visibility and did not see whales again until July 30 along southwest Greenland, though we did see 3 bearded seals on ice in a beautiful fjord at the southern tip of Greenland .

On July 30 as we headed North along west Greenland we found 9 different humpback whales feeding over offshore banks, as well as 3 fin whales, before turning west for Baffin Island .

August 1 yielded no marine mammals under generally poor sighting conditions. By afternoon clear calm weather prevailed, however though we saw spectacular icebergs there were no marine mammals observed. August 2 was spent on land in the Pangurtung area off Cumberland Sound

On August 3 we were inshore along Baffin Island just North of Cumberland Sound and found 10 polar bears on various parts of the coast, including a female with 2 cubs. Six bears were found sharing a 200m long granite island. These bears appeared to have been left behind when the pack ice moved north perhaps carrying any available prey away.

On August 4 we headed south and found an island patrolled by 4 more polar bears and teaming with walrus in its bays. The walrus sightings gave me a particularly satisfying last day and made for a great finale to a wonderful expedition, before heading into Iqaluit for a stormy landing and flight home.

The animals and habitat, of the Arctic landscape are thoroughly striking and vital to preserve. 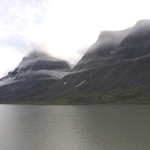 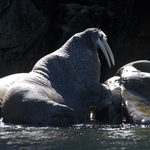 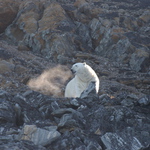 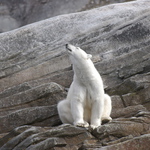 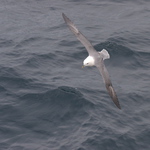 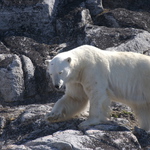 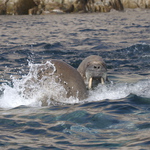 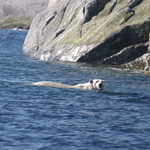