By mid-June minke whales were on a full scale foraging assault on capelin and sand lance within the Mingan Islands. In the Mingan region minke whales feed regularly inshore during early summer , but of late this has become even more pronounced with a constant presence in proximity to the Mingan docks. The minkes use the docks as a barrier against which to push the prey, using very energetic and acrobatic surface lunges in order to get a bigger mouthful. Looking down from the docks one can see the minkes through the surface and observe their agility and efficient feeding techniques. In the 400 or so meters between the harbor and the closest island one could see as many as 7 minkes at a time accompanied by gray seals and marine birds all benefiting from the abundance of prey. 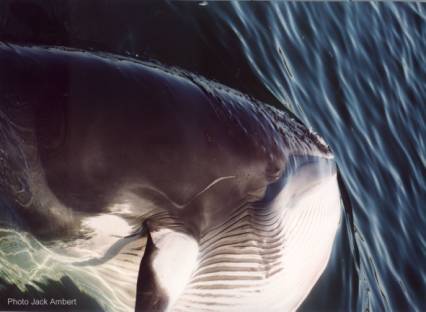 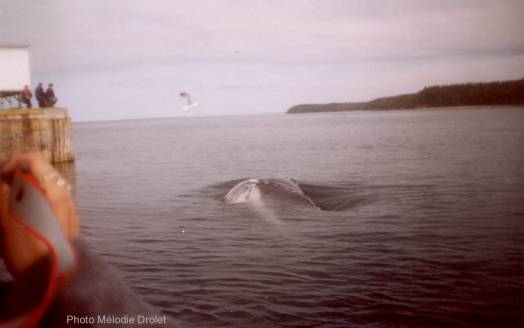 Minke whales herd fish against variances in bottom topography , which enables them to capture fish in an efficient manner, getting the most per mouthful. Minke whales are gulpers, making use of their ventral pouch ( a structure of the mouth) to temporarily engulf water and the prey therein. Once the water is expelled the prey, usually capelin or sandlance, is swallowed. In addition to the bottom relief the minkes have learned that docks provide a uniform surface against which to herd their prey. In addition the capelin often become trapped between the beach and dock offering a conveniently concentrated school of fish , which the minkes can get at with little effort.

On June 27, while working on one of our boats at the dock some team members watched in amazment as a minke lunged out of the water and up on to the beach while feeding on capelin. Was this a misjudged maneuver or a calculated technic? It took the minke more than ten minutes of thrashing about to get back in the water!

This was not an isolated occurrence, because on a foggy July 5th in front of Longue Pointe another minke , or perhaps the same individual, emerged from the water and fog on to the beach after lunging for capelin. This minke was also able to return to the water and fog after several minutes of energetic tashing. These were the first instances of this behavior ever reported in minke whales. I will remind some of what killer whales have been known to do regularly off Patagonia when attacking elephant or fur seals. Is this a newly developed behavior by one individual or an animal that is simply taking unskilled risks. We were not able to photo- identified the minkes involved in this behavior, but will be better prepared for it next time.

Minke whales were more concentrated inshore in June and July, but less abundant in the western portion of the islands where they are usually most abundant. Their presence was, however, more common in the central part of the Mingan Islands where they were regularly seen feeding off Havre St Piere, and in the bays around Quarry, Niapiscau, and Grande Iles.

Interesting observation from all sorts of angles. 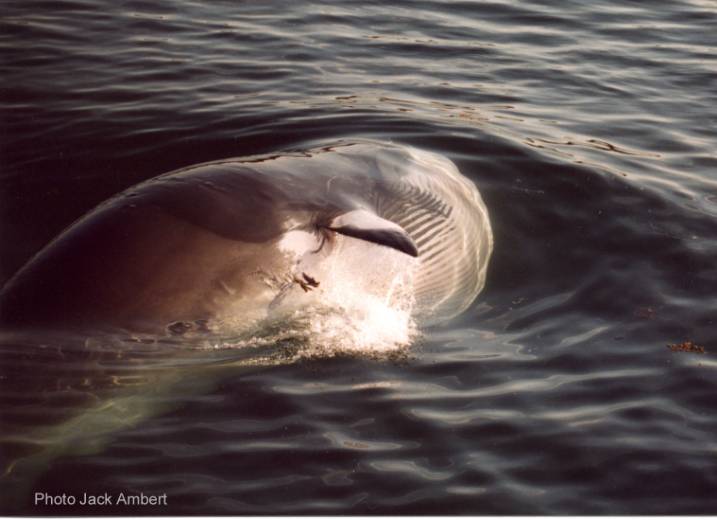