MICS surveyed the Gulf of St. Lawrence aboard the motor sailor SEDNA

In September of 2003 a team of MICS (Mingan Island Cetacean Study) biologists surveyed the western Gulf of St. Lawrence aboard the 165ft motor sailor Sedna for endangered blue whales. This was a unique opportunity to carry out 2 weeks of in areas where little observation effort had taken place. This first research cruise was a success with approximately 20 blue whales identified in addition to a small number of humpback and fin whales. So it was with great pleasure that I accepted to join Students on Ice for a second blue whale research cruise through the western Gulf this past August aboard Sedna. The cruise was the first SOI and MICS collaboration, which will hopefully become a regular occurrence in the years to come. The only worry I had was how to get 9 students to stand two-hour watches during daylight hours and efficiently collect reliable data. Training field assistants takes a certain amount of time at the station with a full team, so this seemed a daunting task.

Our main research effort is carried out in waters of the Mingan Islands and Jacque Cartier passage to Anticosti Island and west. And though we carry out surveys all along the North Shore from the St. Lawrence Estuary to the Strait of Belle Isle we have not been able to cover the northern coast of the Gaspe Peninsula as much as we would like over the last 25yrs. The Sedna cruises offer us this possibility. Our aim was to photo-identify, biopsy ( for genetic and toxicological studies) blue whales and answer questions about their distribution and dispersal in the western Gulf of St. Lawrence and Estuary.

The first leg of the research cruise found Sedna leaving the Mingan Islands on August 21 and heading southeast to Anticosti Island and Pointe au Naufrage (Shipwreck). This area along Anticosti is the eastern most portion of our immediate study area. Unfortunately the whales had moved from this area close in to the Anticosti coast. The calm and warm day provided all with a pleasant sail southeast to and then west along Anticosti, the opportunity to organize watch teams and instruct notions of field observation to the team. I must say that GeoffÂ’s mantra of flexibility regularly passed through my mind during this process. The next morning we had moved back towards the North Shore to a sector where we had been sighting large numbers of finbacks and humpback whales. Just a few minutes after getting underway we found 40 or so finback whales in the morning light, which provided a majestic show and training opportunity. As the west wind picked up, we traveled further west to Banc Boucane where we found several humpbacks, which were seen at close quarters. From this concentration of whales we moved south over the western Anticosti shelf and after several hours of sailing we found a group of 9 finbacks and 6 humpbacks in an area along the southern limit of the shelf we can only rarely reach from Mingan. By that time spotting was being carried out more effectively and the apprentice researchers were refining their note taking methods.

From Anticosti Island we headed southeast to Gaspe. The following afternoon we found a juvenile humpback and 2 finback whales deep inside Gaspe Bay, but no blues. On August 24 gale winds kept us at anchor off Perce for a day. The morning of the 25th brought clear skies, great visibility and calming winds, so we began the long transect along the northern shore of the Gaspe Peninsula. As we left the gannets behind on Bonaventure Island we came across a single blue whale B161, seen regularly since 1981. This whale carried extensive fresh scarring along its caudal peduncle between the dorsal fin and its tail. It had probably become entangled in fishing gear, which had left its mark even though netting had been shed. 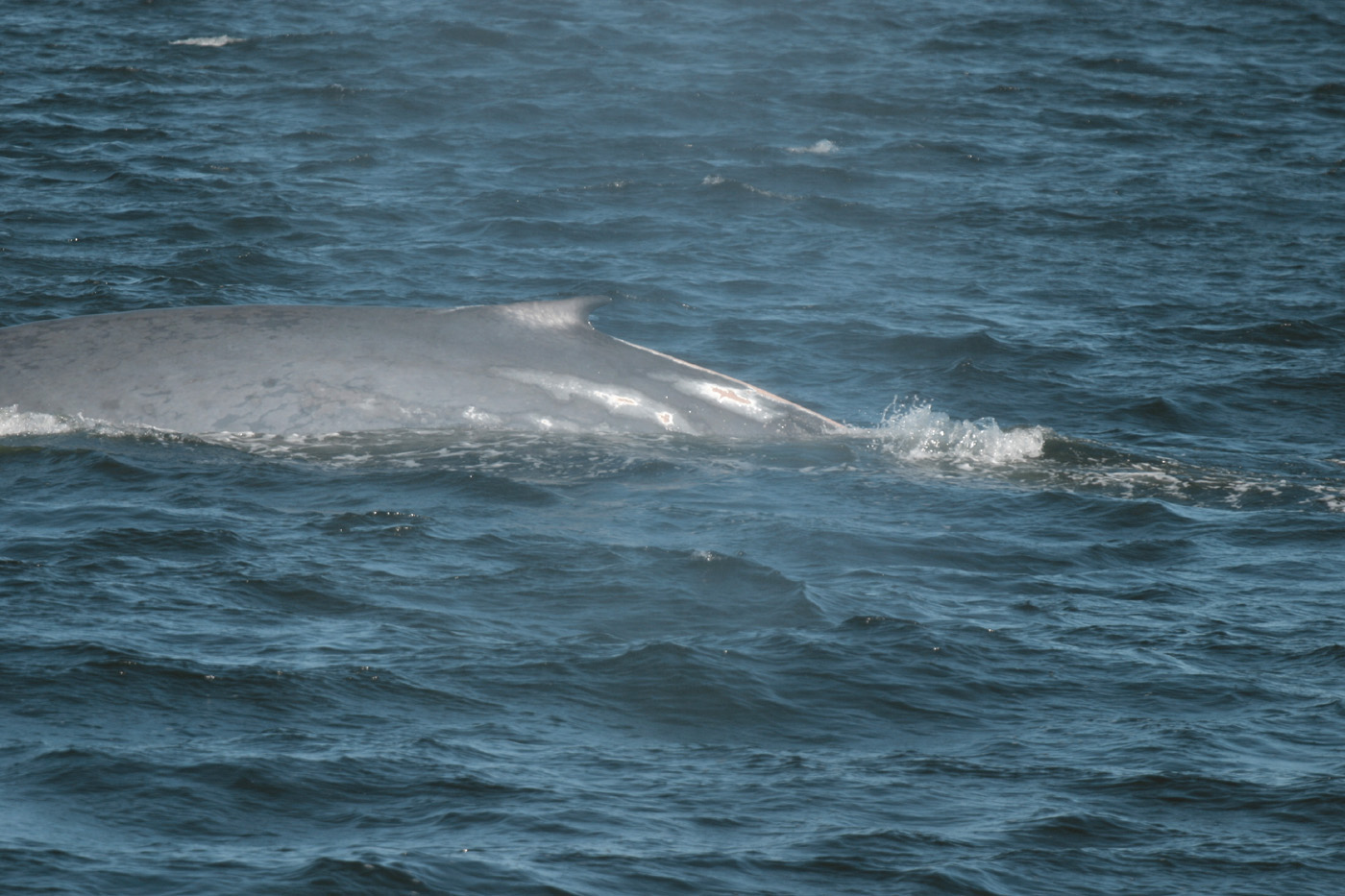 That same day, just after passing Forillon we came across several finbacks 2 more juvenile humpback and a single blue whale. It was a calm, bright evening and we were able to easily identify and biopsy the blue. This whale was a new individual and offered us a graceful, imposing spectacle by raising its tail in the rich late afternoon light each time it dove.The following morning August 26 we left our anchorage just off Riviere-au-Renard on a sunny calm day and by mid morning found a pair off blue whales. This pair, probably female in the lead and male flanking, appeared to be new and have not yet been found in the catalog of photographically identified individuals. We have extensive data showing that pairs formed for more than an hour and up to 3 weeks or more are almost certain to be females with a male in tow. This pair of blues was very accepting of the inflatable and we easily photo-identified and biopsied both. Blue whales are not always as easy to approach, so the moments spent with the pair in relaxed proximity were a privilege.

We left this pair and returned to our westward transect lines by noon and though we spotted many groups of Atlantic white-sided dolphins we did not find another blue whale until around 18:00 when we were heading into Mont Louis for the night. In the sinking sun we easily spotted the tall floating spouts of three blues whales within two miles of shore. We were able to identify and biopsy Sourciere a blue seen only twice before and have now very good quality pictures which will replace those presently in the catalog. We also identified Mantis B166 a female, which has been seen in the Estuary since 1990.The next morning August 27 was gray, but calm and we found two blues and 3 finbacks just 2 miles off Mont Louis. One was again Mantis and the other we are not certain though some distant pictures may yet reveal its identity.We continued on transect west towards les Mechins and though we had a light wind and some fog patches the survey was effective, but yielded only a few harbor porpoise.

The morning of August 28 just off Les Mechins in poor sighting conditions due to fog, we found 6 blue whales amongst which we had B017-Scythe, B185-Pewter, B184, B158; B035-Etrie all of whom are males and a new blue, which could be a female as it was paired with B185, but no biopsy was taken due to weather conditions. During the day we found other known animals including B195 and Blanco B169 a male. By the end of the day as we proceeded on towards Matane we had came across at least 15 blues, unfortunately the weather conditions kept us from being able to work from the inflatable for very long. This day’s sightings would prove to be of great value in helping us determine dispersal between Matane and west into the Estuary to our Forestville study site. Etrie was seen on September 2 off Forestville 90 miles away from Les Mechins and two days later back off Les Mechins. B185, B017, and several others were also sighted briefly off Forestville. We have had more and more evidence of fairly fast movement between these two areas in the Estuary, but the sightings from the Sedna combined with our research in the Forestville area were of great value in adding precision to these observations. In addition B363-Sourciere seen on August 26/27 off Mont Louis was resighted on September 8 off Forestville about 150 nautical miles further west.

In the end the Sedna sighting team came together well considering the short training period and the results were very good. The Sedna cruise enabled us to collect invaluable data on the distribution and dispersal of whales along the Gaspe coast and information to the histories already established for many individuals. The total blue whale sighting from the Sedna were of 20-21 individuals including 4 probable new additions to the catalogue.Many thnaks to all of you who participated and contributed to this blue whale research survey. 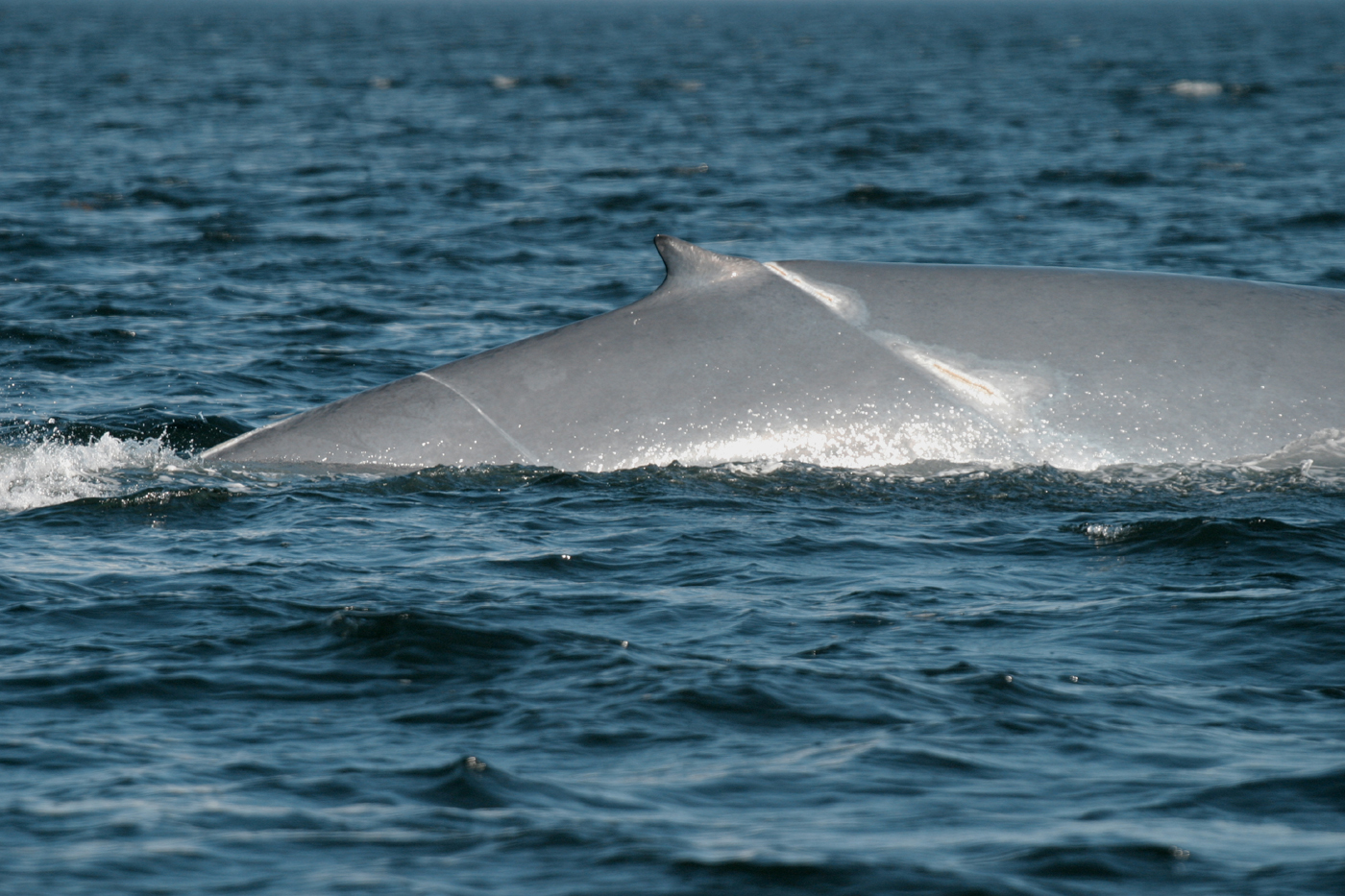