A new generation of Blue whales?

The 2003 field season was notable for the presence of 3 blue whale cow and calf pairs. This was a first; there have never been more than 1 calf confirmed in any of the past 25 field seasons. 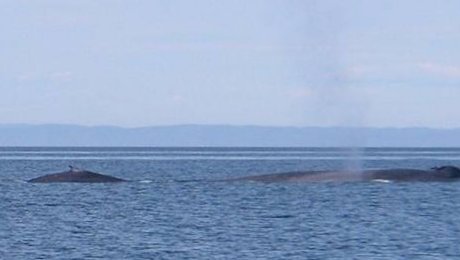 pictures of Crinkle and her calf by Judy Judd 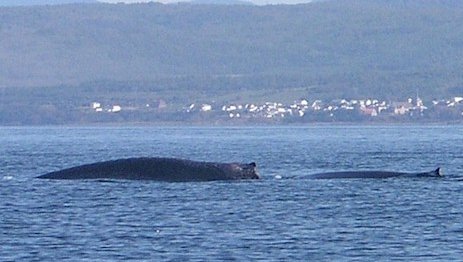 The first calf seen in the St Lawrence was in 1979, when Totch B071 appeared with a calf.

In 1980 N013 Bulleta was the next female to bring her calf into the St Lawrence, this was followed in 1981 and 1982 by two aerial observations of cow and calf pairs, one off Baie Johan Beetz, while the other was seen off Blanc Sablon.

Five years passed before B204 June was seen with a calf in June 1987 off Mingan.

In 2002, Chameau B103, despite her easily recognized congenital deformity, was first sighted off eastern Gaspé, in June and again in the Estuary throughout August with a calf. This type of movement within the St Lawrence is one of the regular dispersal patterns we have observed during the summer months for blue whales. Blue whales sighted off eastern Gaspé in June will be seen off Matane in August and then further up river to Forestville and Les Escoumins. In June 2003 a blue whale cow and calf was first reported from Gaspé Bay, and observed again in the estuary by Meriscope and GREMM biologists in July. The identity of the female was quickly confirmed as B235 Kingfisher, a regular to the estuary since 1990. She had been seen in the same area in August of 2002 when she was pregnant.

Kingfisher and calf were joined in the estuary by another cow/calf pair in July. This second mother was photo-identified by the Gremm as B274.

At the end of August the MICS team working off Sainte-Anne-de Port Neuf in patchy fog observed Crinkle a female known since 1982. Two hours later as the fog closed in yielding only 25m of visibility Crinkle popped up 2m in front of the boat and was joined by a much smaller blue whale, which quickly passed beneath Crinkle and vanished. Both were quickly lost in the fog and only the spouts could be heard nearby, but never close enough or long enough for confirmation that a third calf had arrived in the St Lawrence. At the beginning of September the MICS team working off Matane was lucky enough to again find Crinkle and this time there was no doubt Crinkle was accompanied by the record third calf of the year.

Crinkle has never been seen with a calf before, even though she is a very regular visitor to the St Lawrence from July to November and was seen in 2002.

Why were there suddenly three calf sightings in one season when there have been so few in the past 25 years and never more than one sighted in any year? Are calves generally weaned before they enter the St Lawrence, or do females with calves not come into the St Lawrence as regularly as those without calves? Are the rare calf sightings in past years exceptions? Do blue whales from eastern Canadian waters have reproductive problems?

The three calves all appeared to be in perfect health and well fed, but will these calves survive? None of the previous calves seen in the St Lawrence have been re-sighted, but will these three return and become a valuable addition to this population. It may take a good many more years to answer these questions, but these three calves offer encouraging signs for a blue whale population with seemingly very low recruitment. And so the blue whale story has added a few new interesting pages with new chapters to be written.

The information presented here is possible because of the collaborative efforts several research teams and several valued and generous independent observers- thank you all!