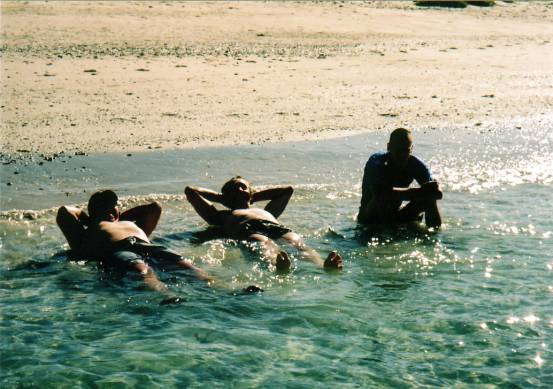 A new sub species of whale has been discovered in the Sea of Cortez. Thought to be closely related to the blue whale (Balaenoptera musculus) this new species of whale was first formally sighted in early March 2002 beached on the island of Montserrat, south of Loreto (see picture above).

This new sub species has been named Balaenoptera micsulus.

Later sightings of these three whales in the water demonstrated that the beaching evidenced in the photograph above was only temporary and that they were subsequently able to re-float themselves. The reasons for the beaching can only be guessed at this stage. One theory emerging is that the whales may have been sun-bathing.

From observations in the course of the two weeks these whales appear to be very comfortable in the presence of local fishing boats (pangas). However, it was observed that pangas that came into close contact with these three particular whales suffered mysterious mechanical defects at around the same time. A cause and effect relationship has yet to be established.

These whales also appear to have a high level of interaction with their cousins the blue whale. Many times they were spotted in close proximity to blue whales in the area. On most occasions the whale pictured centre in the above photograph could be seen leading these advances. Directional signals were noted being given, in the form of discrete flipper movements, guiding the other two whales to areas of interaction with blue whales.

Further initial observations on the social structure of this new sub species suggest that it tends to favour small groups and is rarely sighted alone. Indeed, this group of 3 males (two juveniles and a more mature male) was sighted together on many occasions in the Loreto area in the early part of March. During the third week of March, however, only the two juvenile whales were sighted - the older patriarch (centre in photograph above) apparently having departed, possibly up North on an annual migratory route.

Reports of subsequent sightings of this male in the Mediterranean off the coast of France have not yet been confirmed and are currently being investigated. If confirmed marine mammal scientists may have to drastically rethink their theories on whale migration. One of the immediate questions that would have to be answered would be how did the whale get through passport and security controls at the local airport. A question not only for marine mammal scientists but for National Security advisors too.

Further unconfirmed sightings of this whale in downtown Montreal have been rejected by experts as "unlikely" and "stretching the imagination"..

Scientists are now eagerly awaiting the start of the new field season in Loreto next month to continue their observations of the new sub species and to confirm/disprove the initial theories that have emerged. Further update bulletins can be expected shortly.